Daughters of the Moon

After defeating the Human/Orc base in the last chapter Tyrande is hounded by Undead forces who drive her back deeper into the forests. She must escape the Doom Guards and warn the rest of the Night Elves.

Escape Into Shadow – Hide from the Doom Guards and bring Tyrande back to the Night Elf town.

Claws of Attack +3 – to the north west of your starting location.

Slippers of Agility +3 – Same location as above.

Potion of Greater Healing – In a crate just across from the first river.

Scroll of Healing – Near to the Furbolg in a cage.

Druid Pouch – In a crate in the forest. Increase intelligence by +1.

Potion of Healing – In a tent in the small Human camp with trapped Elves.

Ring of Superiority – In a crate where the Humans and Undead are fighting.

Mantle of Intelligence +3 – At the back of the Orc base.

Ring of Protection +2 – Surrounded by spikes.

Daughters of the Moon Walkthrough 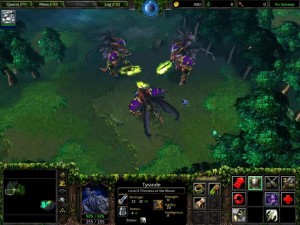 The Night Elf town lies to the south west of Tyrande. This is not a difficult mission and there are lots of items to collect if you have the time to pick them up.

Tyrande has the hide ability (shortcut is the i key) which lets her shadowmeld into the forests. Use this whenever the Doom Guards get close.

You’ll certainly want to pick up the Claws of Attack +3 just to the north west of your starting location.

A little further down you’ll see a Furbolg trapped in a cage next to a Scroll of Healing. Unfortunately if you free the Furbolg he’ll probably be killed by the Doom Guards. Continue through the forests until you come to some crates. One of them has the Druid Pouch in it. This increases your intelligence by +1 when worn.

Continue across the bridge and kill the Human soldier to free the Elven Archers who will join you. A tent here has a Potion of Healing. All of the Archers can Shadowmeld so don’t worry about the Doom Guards.

To the east the Humans and Undead will be in a battle. You can skip past them while they’re fighting or weaken the side who is winning so you can kill them all. A crate here has the Ring of Superiority. 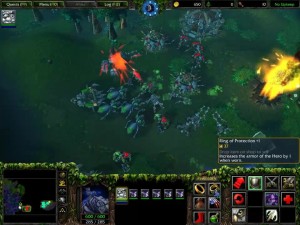 To the east the Undead Crypt Fiends are attacking an Orc Base. The Orcs are guarding a Mantle of Intelligence +3. Slip around the back and grab it while the fighting is still going on.

Head into the Way Gate to the south and meet the Night Elf Huntresses who can also Shadowmeld. They’ll tell you about the Shades who can see invisible units and alert the Doom Guards.

Whatever you do kill the Shades as soon as you see them!

Continue to the north. Soon dawn will break and you’ll need to make a run for it to the north gate where other Night Elves are waiting.

By now you should have a fairly sizable force. Destroy the Undead encampment which has lain siege to the Night Elves base and head into town to complete this chapter.

Continue to Night Elf Chapter 3: The Awakening of Stormrage.