A Destiny of Flame and Sorrow

In this chapter you take control of Illidan in his search to find the Skull of Gul’dan. This is the second last chapter of Reign of Chaos and is a difficult one to complete. The Skull is located in the north west section of the map but you’ll have to face many obstacles to get there.

The Skull of Gul’dan – Destroy the Demon Gate and bring Illidan to the Skull.

Mana Stone – The Brood Mother to the east of your base drops a Mana Stone.

Boots of Elvenkind +6 – These can be found in an egg next to the Brood Mother.

Claws of Attack +6 – From a Satyr Trickster to the west of your base.

A Destiny of Flame and Sorrow Walkthrough

Illidan already controls a fairly well established base. Unfortunately you’ll be on your toes right from the beginning as a Level 8 Satyr will attack from the west. As soon as the Satyr attacks bring all of your forces over for the battle. You should just be able to defeat them but maybe only Illidan will survive. 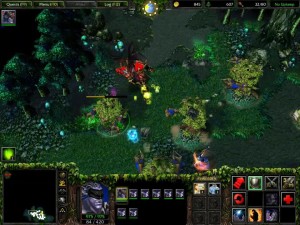 Doom Guards will attack from time to time from the west but your Ancient Protectors should be enough to hold them off. Have a Wisp on auto-repair to heal up your Protectors once they get damaged.

The Brood Mother to the east drops a Mana Stone. and an egg contains the Boots of Elvenkind +6.

This is a fairly large map so there’s lots to explore. Make sure you research the upgrades for your units. You’re not in a rush here so take your time and build up your base defenses.

The Satyrs have two bases conveniently located to the north west and north east of your starting base. Once you clear them out you’ll have a much easier time fighting Tichondrius. Choose one direction and send your forces to clear them out. I used Illidan, a couple of Huntresses, Archers and a Ballista. This was enough to destroy each base. 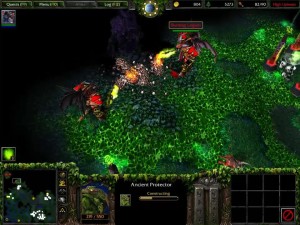 The north west mine in the Corrupted Ancients base is a perfect place to launch your attack on the Gate. Protect this area with Ancient Protectors and build up your forces to launch an attack. Make sure you have enough Moon Wells for a complete army and sent two groups to launch the attack.

There are Doom Guards on the way to the Skull so be prepared for a battle. I used predominantly Druids in Bear Form, Huntresses, a few Archers, Ballista and Illidan to win the fight.

You may need to send a few waves to weaken his army before the final victory. Pull Illidan out of the battle if he’s in danger of dying. You can always rebuild your army and send out another wave of attacks. 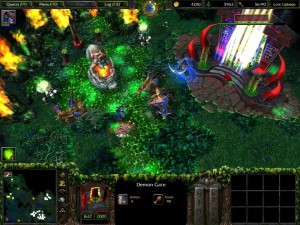 There are a couple of Infernals protecting the gate and the Skull. Send your entire army to defeat them and then focus on destroying the Gate.

Instead of destroying the Skull Illidan claims it for himself. He turns into a Demon Hunter and is now able to damage Tichondrius.

Tichondrius is located on the north eastern corner of the map. As soon as you send your forces to attack Tichondrius you’ll be ambushed by Infernals. Get the heck out of there and make sure Illidan survives.

Launch another attack and send your forces up slowly. A Scroll of Restoration is a handy item to have in your inventory. When you do get into battle have have your army deal with all of the Undead units and have Illidan target Tichondrius as he’s the only one who can do any real damage to him.

Once Tichondrius has fallen the chapeter will end. Get ready for the final battle in the Night Elf Chapter 7: Twilight of the Gods.