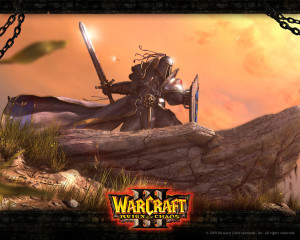 Warcraft 3: Reign of Chaos is a fantasy strategy game that was released by Blizzard Entertainment back in 2002. This game sets the mark pretty high for what a great real-time strategy game should be like.

Warcraft 3: Reign of Chaos includes four playable races, humans, orcs, night elves and the undead. Each of these races have their own unique units, heroes and campaigns which are unlocked as you complete the previous one.

Warcraft 3 sold over 1 million copies in the first month it was released and is still a favorite RTS game for many millions around the world.

Prologue – Exodus of the Horde

Human Campaign – The Scourge of Lordaeron

Undead Campaign – Path of the Damned

Orc Campaign – The Invasion of Kalimdor

Warcraft 3: Reign of Chaos, the third installment of the Warcraft series was released by Blizzard Entertainment back in 2002. It was one of the most popular video games with over 4 million copies sold in the first month alone.

Warcraft 3 includes four playable races each with their own campaign. In total  you’ll be able to play through 34 missions as well as numerous custom maps.

The expansion, The Frozen Throne was released in 2003 and includes new units for each race. The food limit was increased to 100, from 90 in Reign of Chaos and sea units were also added.