This is a fairly tricky mission in that you’ll need to move your entire base from place to place while avoiding the Undead, Human and Orc forces. If you’re not careful you could end up being squashed in the middle.

Awaken Druids – You must reach the Barrow Dens and destroy the corrupted Night Elves base.

Cursed Glade – Kill the Death Revenant to heal the glade and restore the forest.

Ironwood Branch – In a Dark Troll camp to the east of your first gold mine.

Ring of Protection +2 – A Dark Troll Warlord to the north drops this ring. 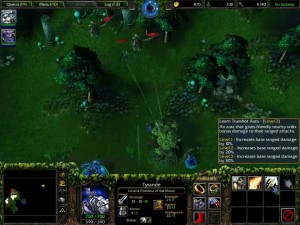 There is a Gold Mine just to the north east of your starting position so set up your first base there. Unfortunately this sits between Orc and Undead bases and the mine only has 2,000 gold so you  won’t be staying here long. You have two heroes for this mission, both Furion and Tyrande.

The Orcs and Undead will attack from the air so make sure you have at least a couple of Ancient Protects to help out.

Pick up your camp and move it over to the next Gold Mine to the East. Once you get there you’ll probably spot the Crazed Furbolgs to begin the optional quest. If you’re up for it take on the Furbolgs. There’s a level 9 Furbolg Warlord to the north that must be killed if you want to complete this optional quest.

Once again this Gold Mine wont last you long but there is a Human base to the east with another small mine. 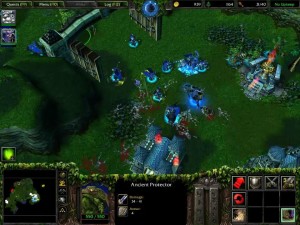 Take your forces to the east along with your big trees and invade the Human Base. It’s lightly defended so you shouldn’t have any trouble taking over.

There mine only has about 2,000 gold in it but once you get into the glade it won’t matter anymore.

Outside of the southern gate you’ll find more Night Elf units who will tell you about the Cursed Glade.

Send an Owl to scout out ahead and then send your forces into the Cursed Glade. The forest is haunted by Ghosts, Giant Wolves and Skeletons who are fairly weak and will give you gold every time you kill them.

The Death Revenant is to the south east. Once you kill it the glade will be restored.

Unfortunately your mission isn’t over yet. As you head north to the Barrow Dens you’ll be stopped by Corrupted Night Elves working for Tichondrius. Bring all of your forces over to the eastern Gold Mine and set up your base there.

Destroy all of the Corrupted Night Elf Buildings and then bring Furion north to the Barrow Dens to complete the mission. Continue on to Night Elf Chapter 5: Brothers in Blood.