Enemies at the Gate

The Orcs, Demons and Humans have now spread themselves throughout the Ashenvale forest. Tyrande Whisperwind believes that these forces will bring doom to her homeland. Tyrande seeks to establish a base and deal with these outlanders.

Night Elf Base – Entangle a Gold Mine, construct an Ancient of War and Moon Well and train 5 Archers.

Ring of Protection +1 – In a crate in the Furbolg village to the south.

Potion of Healing – In one of the tents of the small Human camp in the south.

Scroll of Protection – Same location as above.

Circlet of Nobility – In a tent on the western side of the Human/Orc Base.

Enemies at the Gate Walkthrough 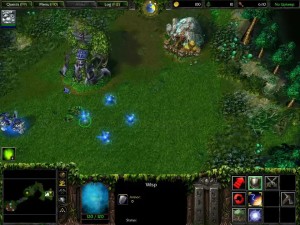 You begin this mission with Tyrande, an archer, four Wisps and a Tree of Life. Bring your tree of life over to entangle the Gold Mine. This mine only has 12,500 gold so you’ll need to find another mine soon.

Wisps can be used to harvest gold and lumber. They don’t chop down the trees but extract the lumber without harming the tree.

Send all four wisps to harvest lumber while the Mine is being entangled. A Gold Mine can hold up to five Wisps. Produce some more Wisps and send them to the Gold Mine.

Moon Wells are the “farms” of the Night Elves. They supply 10 food and heal and replenish mana to nearby friendly units. Construct at least 3 or 4 Moon Wells and an Ancient of War. Train 5 Archers from the Ancient of War to complete the first quest.

Just to the south of your starting location is another Gold Mine and a Furbolg Village. The Furbolgs are friends of the Night Elves so send Tyrande down to have a chat with them. They’ll tell you of their plan to leave this place but need to find their other Furbolg friends.

While your Archers are training you can go searching for the Furbolgs. Send your Owl Scout out to investigate the map. To the north are three Archers who will join your cause and to the west of them the first two missing Furbolgs.

In the south center of the map is a village with another two Furbolgs. the crate here has a Ring of Protectoin +1. To the west of them is a small Human camp. The tents have a Potion of Healing and Scroll of Protection.

Another two Furbolgs are locate to just to the south east of the main Human/Orc base. There’s a small orc camp by the Gold Mine in the center of the map and a larger Orc camp with Wyverns to the north west of the map. 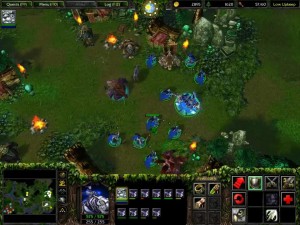 Take over one of the other Gold Mines if you start to run out of gold. this is a fairly easy mission so take your time.

To the north center of the map are three more Furbolgs who have been captured by Orcs. Slay the Orcs to free the Furbolgs. The last Furbolg is in the very north west corner of the map.

Go back and talk to the Furbolg Shaman who’ll give you two Furbolgs to help with your battle against the Paladin.

By now you should have a large force of Archers as well as the two Furbolgs. Send them over in two groups and overrun the Human/Orc Base. Focus on killing Duke Lionheart to win the mission and proceed to Night Elf Chapter 2: Daughters of the Moon.