The Siege of Dalaran

Arthas stands ready at the gates of Dalaran but the Archmages have erected auras that will hurt any undead that walk through them. You must kill the Archmages to disable the auras. Move your forces up carefully and this quest shouldn’t be too difficult.

Three Archmagi – Kill the three Archmagi, including Antonidas, who have cast auras preventing access to the city.

1) Conjurus Rex, in the east area, after removing the first aura, drops a Mantle of Intelligence +3.

2) Boots of Elvenkind +6 just to the north after slaying the second Archmage.

3) Tome of Intelligence inside the Vault.

5) Khadgar’s Pipe of Insight, as above. Gives bonus to mana regeneration to hero and all nearby units.

The Siege of Dalaran Walkthrough

Before you do anything else use the Meat Wagons to destroy the two Dalaran Guard Towers just by the first aura. This is the first chapter where Abominations are available. They’re pretty tough and will come in handy in this mission.

Because your units take damage while they’re in the aura only send in strong units with plenty of hit points. This basically includes the two heroes and the abominations.

You begin the mission with a crypt and a graveyard. Upgrade your Halls of the Dead to a Black Citadel so you can make a Boneyard to breed Frost Wyrms. To the east of your base is a Goblin Merchant. 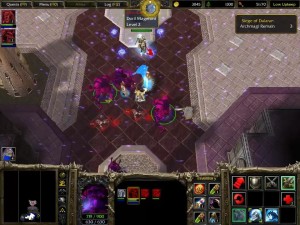 The first Archmage, Doril Magefont, is directly north of your starting position and he’s only lightly guarded. A small force of Arthas, Kel’Thuzad and two Abominations will be enough to defeat him as long as you heal up the Abominations with Death Coil when they get low on health

Once he’s dead the aura will be disabled and you can move up the rest of your troops.

Build a Sacrificial Pit and turn one or two of your Acolytes into Shades.  This will make it easier to explore the map without being seen. The second archmage is to the north west of your current position. To the east is another human hero, Conjurus Rex. There’s a workshop just to the north of him.

Start destroying the Guard Towers of the Mages Guild and you’ll be counter-attacked by a fairly large force of riflemen. Kill the, destroy the Towers and tear down the Barracks just behind the Tower. Destroying the Barracks must be a priority to stop them producing units.

The rest of their base will be easy to destroy and you can claim their gold mine if you want to.

The second archmage, Landazar, is just to the north of the Mage Base. He surrounded by water on all sides except to the north which makes accessing him a little more difficult. I chose to kill him with a couple of Frost Wyrms. Just fly them straight over to him and take him out. This will remove the curse in the second area. All that’s left is to slay Antonidas.

Antonidas is far to the north and reaching him won’t be easy. Send your Shade out to explore the new area. There’s a Fountain of Healing just to your east and Boots of Elvenking +6 just north of that.

Further to the east of the Fountain is a vault that you can smash for extra items. Inside you’ll find the Tome of Intelligence, Pendant of Mana and Khadgar’s Pipe of Insight. 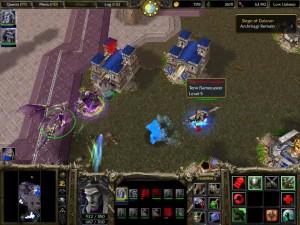 The main base is just to the east of the vault. You can run back to the Fountain if you take too much damage. To the north west of the base are two Barracks that you should take out first.

Tenn Flamecaster, a level 5 hero, will attack when you enter into the blue base.

With the Barracks gone the rest of the base should be a piece of cake.

Now here comes the tricky part, not only do you need to get through the aura to find Antonidas but you’ll be attacked before you even reach him.

Send your shade in to have a look at what you need to deal with. There is a Fountain of Health just to the south of Antonidas which will negate the effects of the aura. Antonidas is also surrounded by Guard Towers. Just inside the aura are cages that you can break for Blue Drakes.

This section needs to be done in two parts. Send a disposable group ahead to take out the units along the way then bring the second group with your heroes to the Fountain of Health. Heal up there for a moment and then run in to kill Antonidas. Don’t worry about the towers or other units. Just focus all fire on Antonidas. Once he’s dead the mission will end.

Move on to the last chapter in the Undead campaign with Under the Burning Sky.