Into the Realm Eternal

Arthas approaches the border of Quel’Thalas to find the Elfgate. This means crushing the High Elf camp which guards it.

1) A Gnoll Overseer in the first Gnoll camp has a Potion of Healing.

2) A Gnoll Overseer in the second Gnoll camp drops a Health Stone.

3) A hut in the second camp has the Book of the Dead.

4) In the third camp a Gnoll Overseer drops a Ring of Protection +2.

5) A house in the same camp drops a Scroll of the Beast.

6) A Gnoll in camp four drops a Potion of Greater Mana.

7) A Golem guarding the Fountain of Mana drops a Potion of Greater Healing.

Into the Realm Eternal Walkthrough

You’ll begin by immediately attacking a forward Elf camp. You can now claim this mine and space as your own to start building a base. 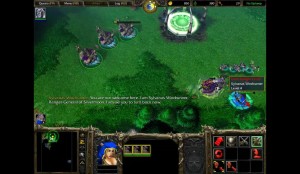 Sylvanas Windrunner will attack fairly early on. With your Meat Wagons you shouldn’t have too much trouble dealing with her.

From now on you can focus on building up your base because you won’t be attacked again until you open up the exits.

There are three exits from your base, south, south-east and east. All of them are blocked by trees. Use the Meat Wagons to destroy the trees, but only when you’re ready because you’ll be attacked from whatever path you open. Sylvanas often goes with her attack force as well so make sure you set up Spirit Towers as a defense.

The path I chose to take was the southern path down to the green Elf base. It’s not too difficult to clear them out and you can then claim another mine. This is a good spot for a forward base where you can launch an attack on Sylvanas.

There is another green base just north of the blue Elf base. You might want to clear this out before heading for the Elfgate.

All-in-all it’s a pretty standard mission. A group of Ghouls, Meat Wagons and Arthas should be enough to clear out the blue base. Use Arthas to heal up the Ghouls when they start to take damage. Once you’ve destroyed all the blue buildings the mission will end.

Continue the story with Arthas in the next chapter, Key of the Three Moons.