Arthas is given the task to summon a Demon Lord through the Demon Gate controlled by the Blackrock Orcs. Your task is to destroy the Orc encampment and kill five of the Orc heroes.

Demon Gate – Destroy the orc base protecting the Demon Gate.

1) The first blademaster who attacks your camp will drop a Manual of Health.

3) Claws of Attack +9 from the Red Dragon to the north of your base.

5) Throk ‘Feroth (Orange Base) drops the Tome of Intelligence +1.

6) Jubel’Thos (Red Base) drops a Tome of Knowledge.

You begin this mission with a pre-built base and your first Frost Wyrm. These flying dragons can learn the Freezing Breath ability which makes them great against defensive towers.

After a few minutes you’ll be attacked from the east by a level 6 blademaster, Haomarush. After you kill him he’ll drop a Tome of Demon Lore and you’ll be given a quest to slay the remaining five orc heroes. He will also drop a lootable item, a Manual of Health.

It is going to take some time to work your way through these orc camps. Some of them are better defended than others. I’ll tell you the order that I found easiest.

Blue Base West of Camp 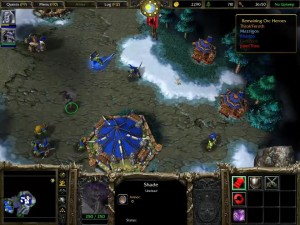 The blue base with Khanzo as a hero is lightly defended and should be your first target. He will drop a Tome of Agility +1.

Keep a line of Spirit Towers around your base as you will be attacked from time to time.

When you destroy the base you’ll have another mine you can take advantage of. In fact gold is not going to be an issue in this chapter as each of the orc bases have their own gold mine.

There is a Red Dragon to the north of your base and he will attack if you get too close. Once killed he drops the Claws of Attack +9.

There’s another dragon camp slightly to the east. The big dragon will drop a Periapt of Vitality for an extra 150 health.

Brown Base South-East of Camp

Your next target should be the brown base to the south and east of your camp. This is run by the hero Genjuros who drops a Tome of Strength +1. This base is a little more heavily defended. Bring in some Wyverns to help you out.

From the brown base head north to find Mazrigos at the Aqua base. He’ll drop a Tome of Intelligence +1. I sent in Arthas, four Frost Wyverns and a couple of Meat Wagons and that was enough to tear down the entire base.

The orange base is to the north of your own and it’s pretty well defended. Draw out the units from the base and attack them with Wyverns. Take down the towers and unit producing buildings first. To complete the optional quest you don’t need to destroy the entire camp, only kill the orc hero Throk ‘Feroth.

The red base guards the Demon Gate. They have Red Dragons here so defeating them is going to be a challenge. Jubel’Thos is the hero here and he drops a Tome of Knowledge.

Take out the Towers, Barracks and Beastiary as fast as you can. You may need to do it in waves. As long as you make progress with each wave you’ll be OK. I found it easiest to do with waves of Frost Wyverns.

Once you’ve destroyed the Red Base continue on to The Siege of Dalaran.