The Fall of Silvermoon

Your main quest here is to defeat the Sunwell Guardians and place the Urn within the sacred waters. You have the option of taking out Sylvanas’ base as well. If you do kill Sylvanas it’ll stop her attacks on your base and give you time to build up for the big fight with the Guardians.

The Sunwell – Defeat the Guardians surrounding the Sunwell.

Silvermoon Runners – Kill all the runners and don’t let Silvermoon know of your presence.

2) On the western side of the map a Gnoll Overseer has a Potion of Greater Mana.

The Fall of Silvermoon Walkthrough

You will begin this mission with the basics of your base set up for you. Sylvanas will attack fairly early on from the north so keep your army around that area. You’ll want to build a Slaughterhouse fairly early on as well as more Spirit Towers.

Kill all the Runners

To complete the optional quest you need to eliminate all of the runners that Sylvanas’ sends to alert Silvermoon to your presence. The runners take different paths so you’ll need to be on your guard.

As soon as the first runner is sent out you’ll be given some Gargoyles to take him out. Upgrade to the Halls of the Dead so you can build more Gargoyles in the Crypt.

Explore the center of this map with your Gargoyles and keep at least one on each path that exits from Sylvanas’ base. Don’t fly them down south otherwise Silvermoon will be alerted to your presence.

After the first runner is sent out you’ll be given a countdown timer until the second runner arrives. You get four minutes this time but they’ll be sent out quicker and quicker as the battle progresses, settling around 2 minutes.

Keep an eye on when the next runner is to be sent out and intercept them with your Gargoyles. 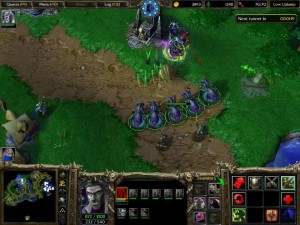 Sylvanas will continue sending out attack forces to you so make sure your base is well defended with Spirit Towers and other units. She only

There is a Fountain of Health to the west of your base and this may be a good stop-off before heading up the path to Sylvanas.

I used Arthas, 6 to 8 Crypt Fiends and a couple of Meat Wagons.

Use the Meat Wagons to take out the Tower early, leaving the Elven units for Arthas and the Crypt Fiends.

When you destroy the last building a cut scene will play and Sylvanas will drop the Hood of Cunning which increases agility and intelligence by 4.

There should be plenty of gold left in Sylvanas’ mine so establish a second base here. Now it’s time to build defenses to the south of your main base as Silvermoon will attack from there. Fortify with extra Spirit Towers.

Bring your forces to the bridge to the south. There are two defensive towers on the other side of the bridge. When you attack Silvermoon will send out her forces as a counter-offensive.

To the south-west is a Mercenary camp where you can buy Ogre Maulers and Trolls if you need more firepower.

Here’s the tactic for defeating Silvermoon:

Place a group of Crypt Fiends, Meat Wagons, Ogres and Trolls from the Mercenary camp and Arthas to the west of Silvermoon’s base. Don’t attack right away. We’re going to draw Silvermoon’s forces out the eastern entrance before attacking from the west.

Bring a group of Ghouls, Crypt Fiends, Meat Wagons and Gargoyles to the eastern entrance. Make a small attack with this group and then immediately move them back to your main camp, beyond the Spirit Towers. Silvermoon’s forces will attack and then get eaten up by your Towers.

Once his eastern forces have been destroyed attack from the west, taking out the towers and barracks first. The rest of the base should be just a clean up. 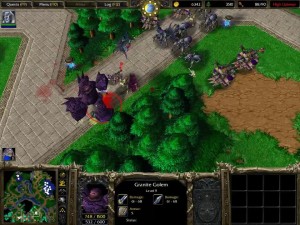 The Sunwell Guardians are another story. They hit hard and have 1500 hit points each. There’s four of them and four towers to take down. Make sure you destroy all of Silvermoon’s forces before taking on the Guardians.

The tactic here is to draw the Guardians out away from the towers before fighting them. If you can draw out one at a time you should have no problem defeating them. Then you should easily be able to destroy the towers.

With the defenses gone bring Arthas to the Sunwell to complete the mission.

Continue to the next chapter, Blackrock & Roll, Too.