Trudging through the Ashes

The plauge continues to spread closer to Lordaeron as Prince Arthas meets with Tichondrius who gives him his first mission as one of the Undead. Arthas must rally the Cult of the Damned.

1) Potions of Healing in the crates near the first guard and near the lumber mill.

3) A horse near the Barracks has the Ring of Protection +2.

4) Crate with guards near it has a Potion of Greater Mana.

5) Spider Ring from the Assassin.

6) Potion of Healing from the Bandit next to the Assassin.

7) Potion of Healing from the Footman who is chasing an Acolyte.

8) Gauntlets of Ogre Strength +3 from the Rock Golem.

Trudging through the Ashes Walkthrough 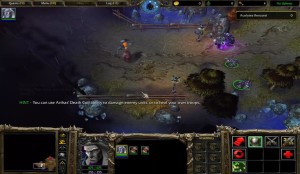 Arthas is given 2 ghouls to work with. Follow the path to the south and then to the west. Here you’ll find the first Acolyte #1 in Hiding. Just 19 more to go!

Further along the next Acolyte #2 is with a regular townsfolk who will alert the guard. Kill the guard when he attacks. Try to stay away from the guards whenever possible as you don’t have a large army in this chapter.

A little to the west is Acolyte #3. Kill the townsfolk who tries to run for help. This Acolyte will give you the optional quest to Find the Graveyard.

Continue along the path to find the Shade. This is an invisible unit that you can use for scouting.

Follow the path around and send the Shade out ahead of you as you go.

Just past the Shade is a square patrolled by the Town Guard. One of them drops a Healing Potion. 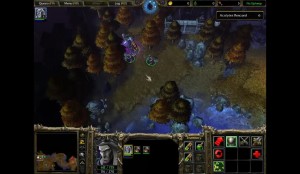 When you come to the main gates of the city on the West take the small path through the forest on the left to avoid being seen.

Rescue the Acolytes in the twon, there’s a few of them here. If you get spotted by the Knights run away! Your forces are too small for a confrontation with them. They’ll stop chasing you if you run out of the twon. 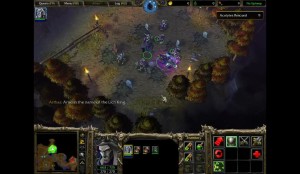 From the town in the south-west follow the path to the north-east to find the graveyard. You’ll be given a few extra units as a reward.

From here head to the North but don’t attach the gates yet. Head west to find the Assassin and Bandit who’ll drop loot for you.

An Acolyte in hiding has also been captured here.

Explore every corner of the map to find the Acolytes in Hiding. Bash down the gate to the north and kill the Footman who drops a Potion of Healing.

Follow the path to the east and rescue all the Acolytes in this town. You should have enough Ghouls from the graveyard to take down a Knight now so you don’t have to be too sneaky.

To the north-east, watched over by a Captain who drops a Potion of Greater Healing, you’ll find four more Acolytes in hiding. By now you should have rescued at least 20, ending this chapter.

Continue to the next mission, Digging up the Dead.