Grim Matchstick is one of the most difficult bosses to defeat. There are only 3 phases but what makes this fight so difficult is the random nature of some of the elements in each phase, such as the location of the clouds that you need to jump to. The location of Fiery Frolic is in the tower in the northern section of Inkwell Isle 2.

The dragon will take up a large part of the right side of the screen. For this reason you can use any weapon you like. A good choice is the Lobbers because they do a high amount of damage. As you fight you’ll need to hop from one cloud to the other while also dodging the dragons attacks. There are 3 main attacks in this phase. 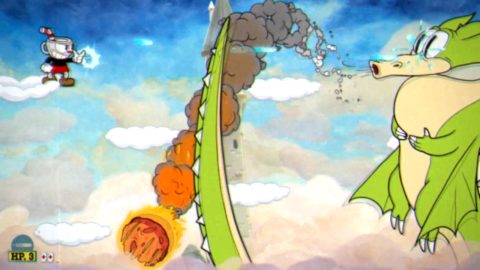 Smoke Rings – Grim will blow out smoke rings that you’ll need to dodge. They’ll head straight for the location you were at when Grim starting blowing them. He’ll send 3 to 5 smoke rings and the last one will always be pink.

Fireballs – Grim also likes to send out bouncing fireballs. These can either be single or double fireballs. Keeping to the left side of the screen will give you time to dodge or jump over them.

Spiky Tail – Every now and again Grim will attack you from below with his spiked tail. It will shoot up to the very top of the screen and remain there for a second or two. You’ll need to stay in front or behind it until it drops down again.

After doing enough damage the dragon will fly away and reappear on the left side of the screen. Fire will shoot up from his nose and little fire creatures will walk along his tongue, occasionally jumping up at you. 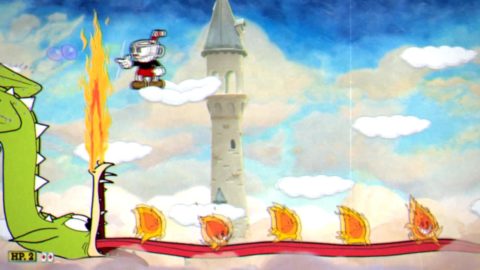 The Lobbers still work well for this phase. When you hear that one of the little creatures is about to jump up at you the best way to avoid it is to jump and dash. This will give you enough time up in the air to avoid hitting it. The way the fire creatures jump seems quite random which can make this phase quite tricky. Use special attacks when you have them.

The last phase of Fiery Frolic is very tricky as the dragon will come back with 3 heads. Two of them will shoot fire bubbles at you. These fire bubbles will explode into smaller fragments if you shoot them. To top it off the third, middle, dragon head will shoot a flame thrower at you. It only every goes along the center of the screen so make sure you’re got a cloud to stand on above or below it. 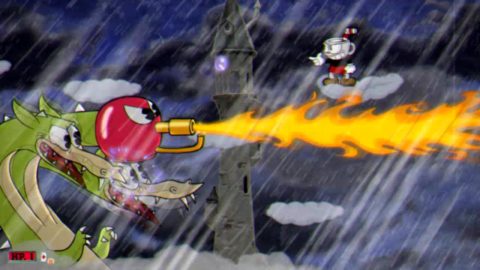 I found it easiest to stay towards the top of the screen and use the Lobber weapon against him. You’ll need to keep moving all the time because the fire bubbles will be shot out directly towards you.

If you’ve made it this far you’re doing well. Good luck with this boss fight as it’s a tough one!