Beppi the Clown is a tough challenge in this rollercoaster-themed boss fight. The Carnival Kerfuffle is located just to the south of the entrance to this world. This fight takes place over four phases and involves a number of different elements, including jumping over the rollercoaster while trying to fight Beppi. 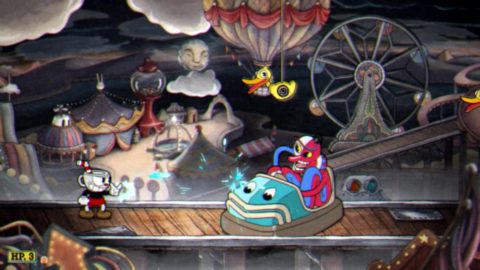 For the first phase Beppi rides a bumper car. It can be difficult at first knowing when he’s going to charge at you but he straightens up and moves back slightly before each charge. You can either blink through him or jump and dash over him. You’ll also need to worry about the duck targets overhead. You can shoot them and then jump through them or just dodge them. Every now and then a duck target will try to drop a light bulb on you.

Bepi will turn into a large balloon. He’s easy to hit but you also have to worry about the dog balloons and the rollercoaster which comes in from the right side of the screen. 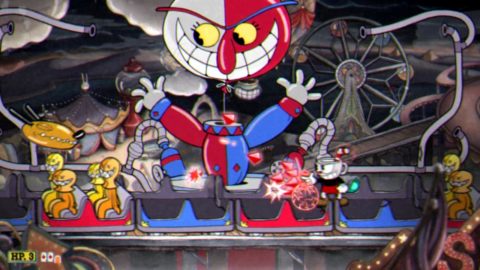 Using the Spread weapon is the best choice with this phase as all of the bullets should hit bepi and he’ll die pretty quickly. Just watch out for when the rollercoaster is about to drive past. You can see it first in the background before it enters the screen from the right.

This phase is the most difficult so far. Beppi will drop down on the left or right side of the screen riding on a donkey. You’ll still have to worry about the rollercoaster rolling in from the right side of the screen and Bepi will throw horseshoes at you. Bepi will throw the horseshoes in two configurations, either bouncing two of them at you at a time or throwing a row of them straight across the screen. They’ll then drop down and you’ll need to find the gap between them. 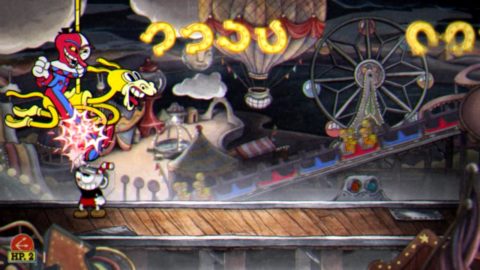 If you can get underneath Beppi while the rollercoaster isn’t there then you have a good chance of knocking him out. Otherwise dodge the passengers on the rollercoaster while avoiding the horseshoes and take shots at Beppi whenever you can. Before too long he’ll get knocked out and transform into his final form.

You’ll have a few second to do damage to Beppi before he tries any tricks. It’s a good time to use your specials. Soon a rollercoaster will fly past quickly at the bottom of the screen and you’ll need to hope from seat to seat to avoid it. Once the rollercoaster passes Beppi will roll out green penguins and eventually baseballs. 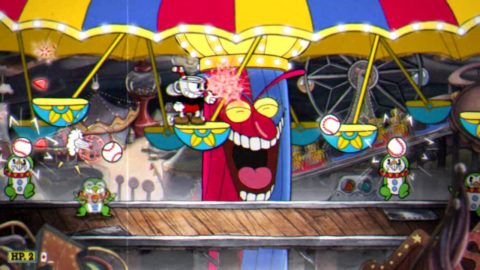 The penguins stay on the ground so they shouldn’t be a problem but the baseballs will chase you from spot to spot. Keep moving and shooting Beppi with close range weapons to defeat him.