King’s Quest 2 is the second adventure game by Sierra in the King’s Quest series. King Graham must head to the land of Kolyma and rescue the fair maiden. 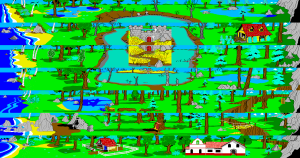 Walk north three times to return to your staring position. Go east twice to Grandmother’s house and open the mailbox to find the basket of goodies.

Walk to the bridge over the chasm (1 north, 4 east). Then north once to find the first door. Read the inscription on the door.

Go south once and then west over the bridge. Continue west four times and then south three times. This is the area that Little Red Riding Hood often appears. Wait here until she shows up and then give her the basket of goodies. In exchange she’ll give you some flowers.

Head west once to the shore with a couch-shaped rock. A mermaid should be here. Give her the flowers and ride on the seahorse.

Give the trident to Neptune and get the bottle with the cloth inside.

Get the gold key and return to the beach.

Walk north three times and east once to the entrance of Hagatha’s cave. Hug close to the wall and approach the cage. Get the cloth from the bottle and place it over the cage. Take the cage.

Head north three times and grab the stake leaning against the tree.

Go east once and south twice. Look in the log and take the necklace.

Continue east twice and grab the mallet from the hole in the tree.

Head south once, then east over the bridge and north to the door. Unlock the door. A new door will appear. Read the inscription on the second door.

Go south and west over the bridge. South to the church and west once. This is the area where a church fairy appears. Stay around here until you get blessed by the fairy.

Head east once and enter the church. Kneel and pray. The priest will ask you a question. Say “Graham” and take the cross.

Walk south twice to the antique shop. Open the door and go inside.

Give the old lady the cage in exchange for the lamp.

Exit the shop and rub the lamp. The first time you rub it you’ll get the magic carpet.
Rub the lamp again for the sword.

Rub it a third time for the bridle. The lamp has run out of wishes and will disappear.
Ride on the magic carpet.

Walk between the rocks but don’t get too close to the snake. Instead put the bridle on the snake and then talk to the horse to get the sugar cube.

Go into the cave and take the key.

Exit the cave and take a ride on the magic carpet again. You’ll arrive back at the antique shop.
Go north once and take the brooch from the hole in the rock.

Head north twice and east over the bridge. North once and use the key to open the second door. Read the inscription on the third door.

Go west back over the bridge and continue west twice more to the entrance to the Dwarve’s house in the tree. Make sure the dwarf is not there when you enter. If he is run out and back in again.

Open the trunk and take the earrings. Take the pot of chicken soup.

Head south once and west once and enter Grandma’s house. If the wolf is there run out and try again. Keep trying until Grandma is there instead of the wolf. Talk to Grandma and give her the pot of soup.

Enter the boat. Once you are across to the castle eat the sugar cube and then get off the boat.
Head up the path and enter the castle. Go to the west and up into the bedroom.

Open the dresser drawer and take the candle. Go back down the stairs. About half way down you’ll notice a torch on the wall. Stand next to the torch and “light candle“.

Walk across to the east twice and into the dining room. Take the ham.

Go east. If the coffin is closed kill Dracula. If it’s open leave the room and return until it is closed. Take the pillow, the gold key and the silver key.

Continue east, up the stairs, to the north. Unlock the chest, open it and take out the tiara.

Walk north and take the fish net. Cast the net into the water. If you don’t catch anything on your first go try again in a slightly different spot. Once you catch a fish pick it up and throw it back into the water.

A large fish will appear. Ride the fish over to the island. Head east and pick up the amulet. Go south and open door. Enter the tower.

Walk up the stairs and give the ham to the lion. It’ll fall asleep. Open the door.

Kiss the princess. When she asks your name say “Graham”. Say “HOME” and enjoy the final cut-scene.