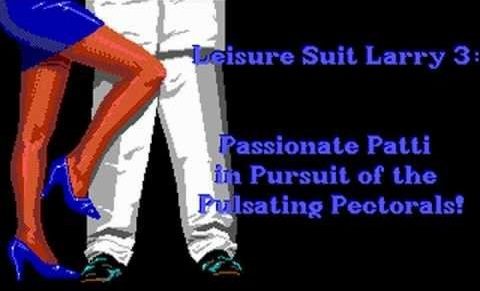 Leisure Suit Larry 3: Passionate Patti in Pursuit of the Pulsating Pectorals is the third installment of this fantastic and hillarious series. It was released for DOS, Atari ST and Amiga. It’s still available for modern machines today.

Leisure Suit Larry 3 begins the story of Larry Laffer with Larry getting divorced from his lover at the end of the last series. Will larry ever find true love? The game begins on Nontoonyt Island and features better graphics and mouse control. You’ll visit a variety of places on the island and come across four beautiful girls that will get Larry’s interest.

This is the first game in the series that you’ll be able to control one of the female characters, Patti, in the later part of the game. The full walkthrough of Leisure Suit larry 3 is below. If you need help getting past the questions for the age quiz you can find the answers here.

Larry begins the game at Vista Point. Make sure you use the binoculars for a spectacular view. You might also want to read the plaque before you leave. Leave Vista Point into the jungle and follow the pointing finger west to your home. Your wife will dump you for a woman. Poor Larry!

Walk back east to the jungle and take the path to the lower east to the second jungle area. Larry will change back to his classic leisure suit. Walk back to the your house and open the mailbox. Look inside the mailbox to find a letter. Larry will open letter and find a Credit Card inside. Walk back to the first jungle area and pick up the Granadilla Wood in the center of the screen, near the Granadilla tree.

Walk to the top west to the second jungle area and then walk to the middle east which takes you to the outside of Chip ‘N Dales. Cut the long Grass with the Knife and then weave the Grass into a Skirt. Walk to the east and enter the Comedy Hut. Speak with the guys at the bottom left. They are the designers who’ll be chatting about whatever you tell them. Sit in the chair in the middle. If you want some extra points listen to the entire comedy routine. Stand up and leave the Comedy Hut.

Walk back to the fountain and then walk to the upper east, behind the building. This takes you to a cabana. Enter the left cubicle and wear the Skirt.  Look at the sink on the left side of the cabana and take the Soap. Walk back to the beach and Larry will sell the statue to Tawni for $20.

Head back to the cabana and change back into your leisure suit. Walk back to the beach. This time Tawni will have gone but she’s left her beach towel there. Take the Towel. Throw the Towel on the sand and then lie down on it for a little while until Larry gets a nice tan. Stand up before you get burnt and then go back to the fountain.

Walk up the steps into the Casino and head north for two screens. Walk to the west and look in the mirror for some points. Head to the west to the theater lounge room. Talk to the ticketman and then type show pass. He’ll give you a page and ask for the ticket number. The answers are below.

He still won’t let you in so tip the man $20 and you’ll be given front row seats. After the show wait in the lounge until Cherri comes out. You may need to move Larry to the edge of the screen before she comes out. Look at her and talk to her until she tells you that she wants some land. Type give Cherri land and she’ll tell you to come back when you have the Deed.

Exit the casino and go back west to the second jungle area. Take the path to the top east, north of the path the leads to Chip ‘N Dales. You’ll be outside the Dewey, Cheatem, and Howe law offices. Enter and speak with the clerk. Ask for a divorce and you’ll be directed into the office of Ms. Suzi Cheatem.

Talk to Suzi and ask for the deed. She’ll tell you she needs time to prepare it. Leave the office and enter again. Speak with the clerk and ask for the Deed. He’ll hand it to you.

Go back to the Casino and knock on the door to Cherri’s backstage room. Give her the Deed and the two of you will make out. Unfortunately a show starts in the middle and Larry will be forced to dance. Type ‘dance’ when Larry is on the stage by himself.

Keep on your crazy outfit and go back to the law office. Speak with the clerk and pay the man for the divorce. He’ll send you in to see Suzi. She’s so impressed with your outfit that the two of you will have a little fun. Once again leave the office and come back in. Speak with the clerk and ask for the Divorce Papers and he’ll get them for you. Look at the Divorce Papers to find a Fat City Keycard.

Go back to the theater lounge at the Casino and open the door to the backstage. Change back into your leisure suit. Leave the casino and go back west to the second jungle area. Walk to the bottom west and you’ll be outside a whale building. This is Fat City. Enter and use the Fat City Keycard on the door to the left.

You’ll be in a room with dozens of lockers. Look at the back of your Fat City Keycard. It will have the number 69 on it with 3 different locations. Each of the location represents a different number and in order make up the locker combination.

Walk around the lockers until you’re in the position shown below. You can type ‘find locker’ to see how close you are to number 69. 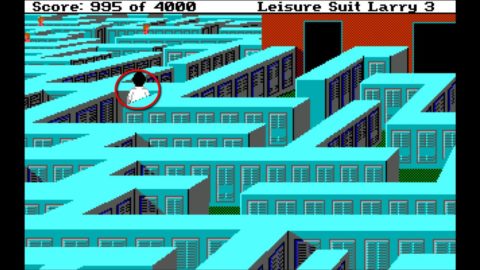 Open locker and then enter in the locker combination. The codes are listed below.

Look in the locker and change into Sweats. Make sure you close the locker and then head through the top door on the right. There’s a workout machine here with four stations. Workout on all of the stations, one-by-one, until a message pops up for each station. You’ll have a short cut-scene and Larry will be looking much fitter and trimmer.

Leave the gym and go back to the locker. Open the locker again, remove sweats and wear the towel. Close the locker and walk through the top left door. Walk to the top of the screen and turn on the shower. Use the Soap and after a while turn off  the shower and leave the room. Dry off and

Type ‘dry off’ and then go back to the locker. Open it once more, use the deodorant and then change back into your suit. Leave the locker room.

Use the Fat City Keycard on the door to the north. You’ll see Bambi making her fitness video. Look at her and talk to her until she tells you she needs some help. Type ‘help Bambi with video’ to watch a cut-scene. She’s so thankful that she’ll take you to the sauna room for a bit of steamy fun.

Leave Fat City and go to the first jungle area. Walk to the lower west, take the newspaper and read it for a few extra points. Stand up and head back to the outside of Chip ‘N Dales. Walk into the cave to the west. Walk to the edge of the cave and take the Flowers. Once you have the flowers type ‘make a lei’ and then go back to the Casino.

Inside the Casino walk north twice and then go to the east twice. Patti should be playing the piano. Look at her and talk to her. Show her the Divorce Papers and then give her the Lei. She heads off to the penthouse and mentions that she wants some wine.

Leave the Casino and walk back to the Comedy Hut. Take the Bottle of Wine from the center table and leave. Go back to the Casino and this time head immediately to the east. Press the elevator button and go inside. Type ‘go to penthouse’ to visit Patti.

Walk up to the small table and pour the Wine. Patti and Larry will have a steamy time together!

Larry has run off and it’s up to Patti to save him. Take the Wine Bottle from the small table and then walk behind the screen to the right. Put on the Bra, Panties, Pantyhose and Dress. Get into the elevator and press button 1. Go to the piano lounge and look at the sign by the entrance. Take the Magic Marker and then the Tips from the piano.

Leave the Casino and walk behind the building to the cabana. Use the Bottle on the sink to fill it up with water. You can also take a drink from the fountain. It will be a long journey.

Head to Chip ‘N Dales now that it’s finally open and talk to the doorman. You can either pay him or ‘give man blow job’ to get in for free. Once inside sit down and watch the show. During the show ‘throw Panties‘ at Dale. After the show has finished Dale will walk past. Talk to Dale to get his attention and then look at him. Talk to him a few times and then leave.

Head to the east and then east again towards the bamboo. Walk north into the bamboo forest and get ready for a maze. The maze solution is shown below. When Patti starts to get dehydrated and starts walking slowly or crawling take a drink from the Bottle. You only get one drink so try not to waste it. 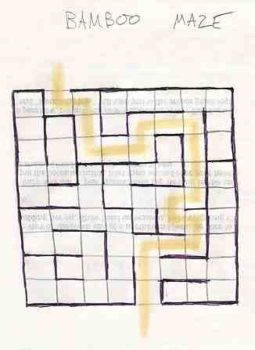 When you’re out of the forest walk close to the stream and take a drink. Continue along the path to the north. You’ll be at the edge of the cliff with an arch over the river. There’s a rock at the very end of the cliff. Remove Pantyhose and tie Pantyhose to rock. Patti will abseil down the cliff.

There are some strange plants in the foreground of the screen. Could that by marijuana? Take Leaves and for a laugh save your game and ‘smoke Leaves‘. Restore your game and make a Rope out of the Leaves.

Once across the other side head to the west. Keep walking forwards and when a wild pig runs out take off your Bra and put Coconuts in Bra. Swing the Bra at the pig to kill it. Walk up to the river.

You’ll notice a log hiding behind the reeds to the left. Push the log and then climb on the log. Save the game if you want to play the mini-game or press F8 to skip it.

Once you’ve made it down the river you’ll be captured by Amazons and put into a small cell with Larry. Well, at least the two of you are together. Use the Magic Marker to draw a door and the two of you will escape.

After falling out of the game walk to the east twice. There’s an anti-grav machine that will make you float. Float over to the base of the machine and pull out the switch. Continue to the east twice to complete the game.