Lure of the Temptress is a point-and-click adventure game by Revolution Software who would later go on to create the Broken Sword series. You play as Diermont and have been captured by the Skorl, an orc-like race under the control the enchantress Selena. You must escape the dungeon, rescue a girl and free the town from the evil enchantress.

The collision mechanics between characters is a bit odd in this game. You won’t be able to walk past someone if they’re standing in the way, instead you’ll do laps around the screen. Wait until NPCs move before trying to get past them.

Left-Click to look at something and Right-Click on an object to bring up a list of actions. You’ll have an NPC follower for most of the game. If you Right-Click on them and choose “Tell” you can give them instructions.

Lure of the Temptress Walkthrough

Try to get or pull the torch and it will fall down lighting your straw bed on fire. Quickly stand in the top left corner of the cell so that when the guard enters you can run out. Close and Lock the door so the guard can’t escape. 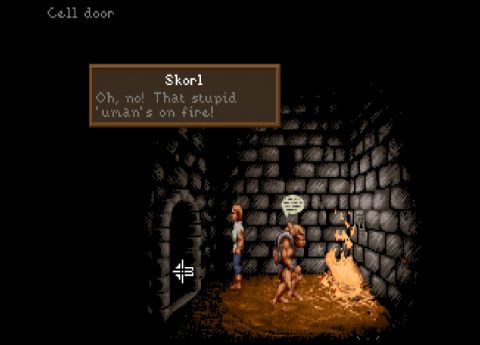 You can talk to the man hanging on the wall but he only cries out for water. Go through the other exit, pick up the Knife on the barrel and the green Bottle next to the sack. Use the Knife on the Sack to split it open. Take a look at the sack to find a Groat (Coin).

Walk to the east, look at the jester and then use the Knife on the bonds by his feet to free him. His name is Ratpouch and he’ll follow you around from now on. If he gets in the way too much you can tell him to leave and go to a certain location.

Walk west and use the green Bottle on the Tap at of the Barrel to fill it up. Walk west and give the Bottle to the man hanging on the wall. His name is Wulf and he tells you to find the Blacksmith.

Push on the loose Brick in the wall to the east. You’re not strong enough to push it over. Stand back and “Tell” Ratpouch to “Push” the “Bricks”. He’ll go over and push a hole in the wall. Follow him out and you’ll land on a sewer grate outside of Town.

Walk west and then north to arrive at the castle gates. See the map below to figure out where to go.

The Blacksmith is on Smithy Street so make your way there. Along the way you may run into a man wearing a green coat. His name is Mallin. 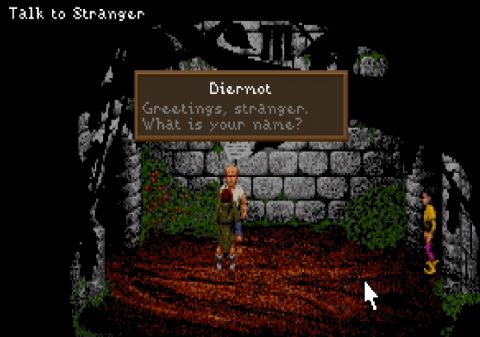 Talk to him and agree to take the Metal Bar. Continue to Smithy Street and enter the Forge. Talk to the Blacksmith and you’ll tell him about Wulf. The Blacksmith tells you about the missing girl. Her name is Goewin. Pick up the Tinderbox from the floor and leave.

Go to the Market Place, north and east from Smithy Street. If you spot Mallin again talk to him and ask him about Goewin. He’ll tell you that Morkus might have some information.

At the Market Place enter the shop and talk to Ewan, the shopkeeper. Give him the Metal Bar and in return he’ll give you a Gem on a necklace and some Groats.

Walk east and south to Magpie Courtyard and enter Magpie Tavern. Talk to Nellie behind the bar and give her the Gem. In exchange she’ll give you a Flask filled with an alcoholic drink.

Talk to Morkus, the guy sitting at the table. You’ll need to “Bribe” him and then talk to him again. He tells you that Goewin was taken to the Town Hall by the Skorl. 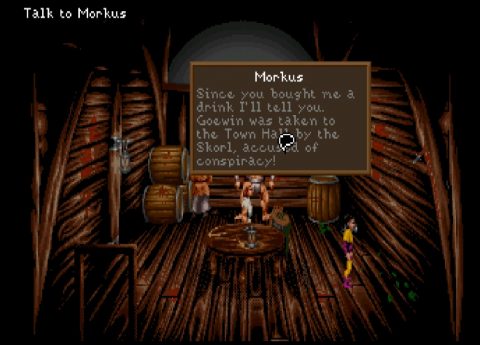 Return to the Forge and talk to Luthern again. If he’s not in the Forge he may be wandering around close by. Give him the Flask and he’ll drink the contents, giving you back an Empty Flask.

Talk to him to tell him that Goewin has been taken by the Skorl. He tells you find Grub and ask for his help. Grub is the man sitting by the well in the Magpie Courtyard.

Go and speak to Grub and he will tell you that you need the assistance of a magician called Taidgh. He also gives you a Lock-pick.

Go north, west and west to West Street and enter the Severed Arms inn. Speak with Edwina, the lady sitting by the fire. Ask if she’s seen Taidgh and she’ll give you his Diary. 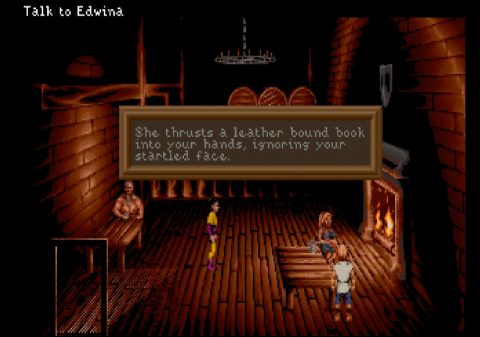 Head east to the Market Place and take a look at the door of the abandoned house.

Go inside and take a look at the contraption. Use the Tinderbox on the oil burner, wait a few seconds and then use the Flask on the tap on the right side of the apparatus. Quickly leave the house before you’re discovered by one of the Skorl.

Drink the potion and you’ll be turned into Selena. Walk north to the castle gates and go through the door. Talk to one of the Skorl and Goewin will be released. Leave, walk east to the Herbal Remedies shop and try to talk to Goewin. She’s still scared of you because you look like Selena.

Leave and re-enter. This time as you try to talk to Goewin you’ll be turned back into your normal self. Talk to Goewin a couple of times and leave.

Talk to Brother George, give him the Book and he’ll give you a Statuette in return. Talk to him two more times and you’ll learn about the charm spell that can be used to charm a dragon.

Leave and walk to the north and east back to Goewin’s herb shop. Talk to her and ask her about the infusion. Tell her you need Houndstooth, Cowbane and Elecampane. She has no Cowbane so you’ll need to find some yourself.

Walk back to the Forge, West, West, West, South and South. Search the flowerbed for the Cowbane flower and grab it. 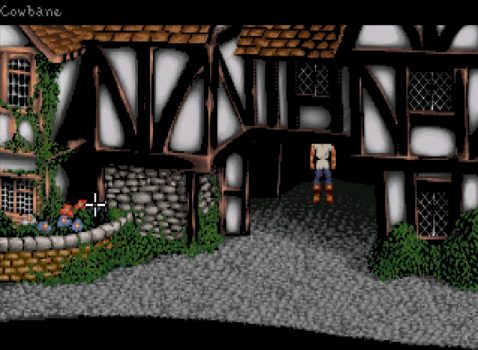 Return to Goewin and give her the herb. Wait around for about 10 seconds as she prepares the spell and talk to her again. She’ll give you the Potion.

Walk west until you come to the Weregates and talk to the Gargoyles. You don’t know there names so go south to the Severed Arm inn. Speak with the man sitting at the table to the left. His name is Ultar and he’ll give you the Gargoyles’ names.

The next few rooms consist of a skull puzzle to get through a number of doors. Make sure you look at each of the skulls in each room or you won’t be able to tell Goewin to use them later.

When the door opens to the west go through to the Blue Room. Once more there are two skulls. Look at them both and pull the Left Skull to let Goewin in. Tell Goewin to go to the Green Cave and pull the Right Skull. When the door to the Red Room opens go through.

SAVE your game here as you’re about to have your first battle. Walk to the north and you’ll grab an Axe. Click just in front of you to swing the axe or a little bit further forwards to walk forwards. Time your strikes to hit the beast until it falls. Walk west into the Dragon’s Den. 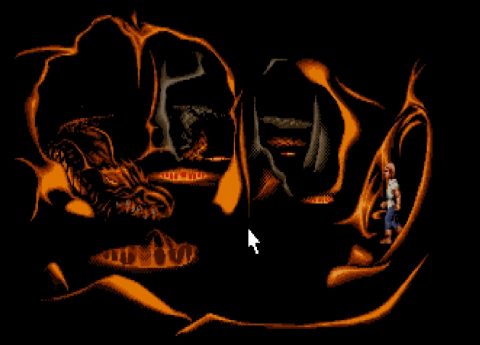 Use the Potion on the Dragon and talk to it until it agrees to help. It will give you the Eye of Gethryn. Walk east three times and pull the Left Skull. Go east, pull the Left Skull, then go east and south to leave the dragon caves.

Once again you’ll need to find Mallin. Talk to him and he’ll tell you about a Skorl who’s been acting suspicious. Go to the Market Place and when a Skorl enters the shop look through the shop window. You’ll overhear a conversation about the Skorl wanting to overthrow the Enchantress.

When the Skorl leaves enter the shop and talk to Ewan. You’ll agree to take his place and secretly get delivered to the castle.

Walk to the east and look at the carcass. Take the Fat dripping off the edge of the table and the Tongs hanging from the wall. Talk to the boy and tell him you’re here for Selena. Tell him to tell his master that someone is in the cellar.

Walk to the west and look at the top cask by the left wall. 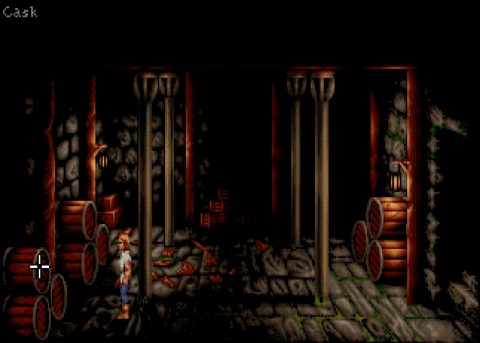 Ues the Tongs on the Bung and the wine will start to pour free. Stand behind the column at the top right and hopefully the Skorl won’t catch you. Sometime the boy gets in the way and he’ll find you anyway. SAVE and try again.

Walk past the sleeping Skorl to the east twice. Use the Fat on the Lever and wait for the boy to appear. Tell him to pull the Lever. At the same time you can operate the Winch to lower the drawbridge.

Walk west three times and then go up the stairs. Walk to the east and then take the exit to the north. On the drawbridge you’ll face another beast. 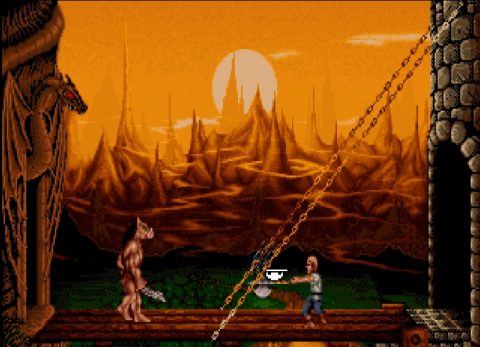 When it’s been defeated walk into the tower to the west to confront the Enchantress and complete the game.