Quest for Glory 4: Shadows of Darkness 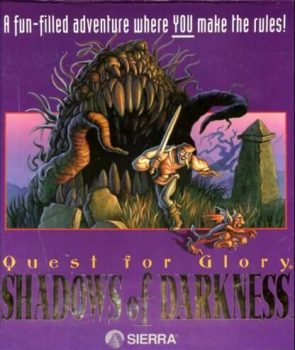 Quest for Glory 4: Shadows of Darkness is the fourth in the series and continues on from Wages of War. You mysteriously land in a cave in the valley of Mordavia and must stop a Dark Cult from summoning an evil demon named Avoozl.

Quest for Glory 4 is the first game in the series to feature voice acting for all lines of dialogue. You can choose from one of 3 classes, Fighter, Wizard or Thief and they all have unique ways of completing various puzzles.

Once you escape the caves you’ll need to find the town which can be found to the north. The swamp area to the west has blocked all travel to and from Mordavia. You are trapped in this land until you find a way out.

There are four classes in Quest for Glory 4. Paladins can only be created by importing a character from a previous game. If you start the game as a Fighter you have the option of turning him into a Paladin by performing noble deeds.

Fighter: Add points to Strength, Vitality, Agility, Weapon Use, Parry and Climbing. When you find the Adventurer’s Guild use the machine to exercise and force open the glass case on the wall to get the Sword.

Magic User: Add points to Intelligence, Magic Skill and Agility. Ask all the characters you meet about Magic and you might be given new spells.

Thief: Add points to Agility, Vitality and Luck. Practice Lock Picking, Climbing, Stealth and Acrobats as much as possible. You’ll want to visit the Thieves’ Guild which is under the Adventurer’s Guild.

Walk to the right a little and you’ll fall over a corpse. You’ll automatically pick up a Dagger and some Coins. Search the other skeletons to find more Coins and Flint. Pick up the Torch from the altar and use the Flint to light it in your inventory. Walk towards the back of the cave and use the Hand icon to open the door.

Fighter: Pick up the Sword and Shield. Walk to the south and cross over the rope hand-over-hand.

Magic User: Pick up the Sheet and walk to the south. Use the Sheet on yourself and then cast Levitate. You’ll be blown across the chasm.

Thief: Examine the rock on the ground to discover the Thief Mark. Walk to the south and walk across the rope to the other side.

Walk to the north to leave the caves. As you walk down the ramp you’ll slide all the way down to the bottom. Katrina will be there and will have a brief chat before running off. Grab the Dark One Sign from the base of the arch.

To get to the town walk west, north x 6, east and north. Look at the map below for directions. 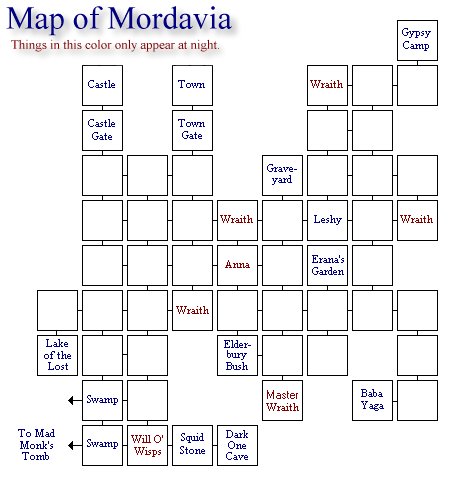 Outside the front gate take a Corn Cob near to the pumpkins. Search the tree stump for some Coins. If it’s night time either levitate or climb over the gate.

Once inside take a look at the staff. Try to take the staff for a secret message. Pick some Flowers. If you’re tired you can sleep here to recover vitality. From here you can walk to the north or east.

Head to the north first and talk to the Burgomeister about everything. Enter his office and talk to him again. He’ll give you the Key to the Adventurer’s Guild. Leave the office and enter the general store.  Buy Rations, Garlic, Pie Tin and Candy. Thieves will also need Oil and a Shopping Bag. Paladins will need a Broom.

Leave the shop and enter the Inn. Talk to the Innkeeper and the Townsfolk about everything and then leave. If it’s night time you can sleep till morning. Leave and go north through the archway.

Talk to Igor and the use the Key to open the door to the Adventurer’s Guild. Sign the Logbook and read through it. Read the books in the bookcase.

Fighter: Grab the Rope and Grapnel and use it on the ring so you can practice climbing. Remember to take the grapnel with you when you leave. Smash open the glass case to get the Sword. Use the machine to build strength. Add weights when needed.

Magic User: Use the machine to the left to build up strength. Add weights when needed.

Thief: Look under the table with the logbook to find a Thief Mark. Take the Rope and Grapnel and use it on the hook to climb up to the ceiling where you’ll notice another Thief Mark. Use the coat hooks on the right. Move the 1st to point left, 2nd to point down, 3rd up and 4th right. Climb up through the hatch in the ceiling to enter the Thieves’ Guild.

Look at the poster on the back wall and take the Guild Card. In the grates on the floor you’ll find another Thief Mark and a Safe Knob. Look at the door at the back and use the Guild Card to open it. In the next room read the books to learn about traps. Place the Safe Knob on the safe. Open the safe by using the code FILCH. Search the desk for traps and then pick the lock. Read the book for a code. On the right wall move the picture frames to reveal 2 safes. Disarm the traps on each one and then crack them open. Move the barrel under the poster and use the code BBY, GGG and RGR. You’ll meet the Chief. Talk to him about everything and then leave the guild. Take the Grapnel when you are done.

Leave the Adventurer’s Guild and walk to the east. Talk to Nokolai and then pull on the rope outside Dr Cranium’s house. Repeat the sequence of bell chimes to open the door and go inside.

Open the door on the back wall and go into meet Dr. Cranium. Talk to him about everything. Grab 4 Empty Flasks from him and also a Healing Potion and Poison Cure Potion. Use the copy protection codes to enter the correct formula.

Magic User: Ask about “Magic” and he’ll give you the scroll for the Glide spell.

Leave and talk to Nikolai again. He’ll give you more information about Anna. Walk to the north and use the Dark One Sign on the Monastery door to safely open it and enter.

Thief: Climb up the wall and take the Blackbird Statue from the small recess above the door.

Give Garlic to the Hexopod and pull the poker on the right side to open a secret passage to the basement.

Fighter: Force open the desk and the use a Cure Poison Potion.

Thief: Disarm the trap by putting the same colors in a row.

Take the Diary from the desk and read it to learn about the six Blood Rituals.

Thief: Use the Shopping Bag to pick up the Squid Statue. Take this back to the Chief to cure him.

Look at the Cask on the wall that’s leaking. Drink from the cask and you’ll have a vision. After the vision the red wine will turn into a Scroll. Pick it up. This is the first Blood Ritual. Leave the Monastery.

Paladin: Go to Erana’s Staff at the town entrance and talk to a ghost named Paladin Piotyr.

Sleep at the Inn when night falls and continue on your journey in the morning.

Walk south from the gate, west twice and north to the Castle Gate. Talk to the gatekeeper Boris. Relay messages between Boris and Olga and eventually they’ll get back together. To tell someone about something use the Mouth icon on yourself.

From the Castle Gates go south three times, east, south, west twice and south. Talk to the Rusalka but don’t get near her. Give her flowers and talk to her again. This time she’ll share more information.

Paladin: Talk to her until she gives you Hair. Place the Hair on the broom. Go to the graveyard and sweep it with the broom. Return to the Rusalka and kiss her.

From the Rusalka go north, east twice and south three times to the Will O’Wisps. Pick up some Rocks from the ground along the way. Go east to the slime pool and use 2 Empty Flasks to pick Goo.

Fighter/Paladin: Throw rocks three times at the pile of rocks to the bottom right and then grab the Bush.

Magic User: Fast Force Bolt at the pile of rocks and then cast Fetch on the Bush.

Thief: Throw rocks at the bush. Climb up the path and use the Rope and Grapnel to grab the Bush.

Walk west, north and west. Pick up the Bone and then walk back east and south. Next you want to make your way across the swamp to the west.

Fighter: Wade through the swamp while avoiding the hands.

Magic User: Cast Glide and float over the swamp to the west while avoiding the hands.

Thief: Jump from clump to clump until you make it across the swamp.

Walk south four times and defeat the Chernovy. Place the Dark One Sign on the tomb. Click on the symbols of the rituals from top left going clockwise. They should be Mouth, Bones, Blood, Breath, Sense, Heart and Essence. You’ll be given the Sense Ritual.

Return to dry land the way you came. If you want to return to the town go north 6 times, east and north.

Walk south from the town gates and then east to meet the Ghost of Anna. At first she’s not aware that she’s a ghost. Talk to her, leave the screen and come back. Do this a few times and she’ll eventually realize she’s a ghost. Talk to her and she’ll ask you to tell Nikolai she loves him. Return to Nikolai during the day and tell him about Anna. Come back to Anna the next night. The two will be together and you’ll be able to pick up Nikolai’s Hat.

Just outside the gates after dark you may be able to meet Katrina. If she’s not there try again the next night. Talk to her about everything until she runs off. If you’re a Magic User she’ll teach you the Frostbite spell.

Make your way down south to the edge of the swamp with the Will o’ Wisps. Place the Candy on the ground to attract the Wisps. Use an Empty Flask on the Wisps to catch them. Walk east to the Squid Statue.

Place the Flask of Wisps on the statue to light it up. Then use the Dark One Sign on the statue. Use the dial to spell out the name “AVOOZL”. Make sure each letter is lit up in red before moving to the next letter. A compartment will open and you’ll get the Bone Ritual. Walk back to the west and release the Wisps.

On the third night go back to the town and enter the Inn. You’ll see a Jester ready to give a performance. Sit down on a chair and listen to his jokes. Once the performance ends ask him about everything. He’ll tell you to meet him in his room later.

Enter your room and leave. Now you can knock on the door at the end of the walkway. The Jester will let you in and you can talk to him again. Pick up the Rubber Chicken from the end of the bed and leave.