The Black Cauldron is an adventure game by designer Al Lowe, of Space Quest fame, and was made shortly after the first King’s Quest game. The Black Cauldron dispenses with the text parser and instead uses three keys for ‘select item’, ‘use item’ and ‘do’ (usually F3, F4 and F6).

The hero of this adventure is Taran, a young assistant pig-keeper who must go on a journey to protect the pig, Hen Wen, and defeat the evil Horned King. Along the way Taran will meet up with some of the other inhabitants of Prydain including the Fair Folk, Witches and strange little creatures.

There are multiple paths to take through The Black Cauldron and multiple endings. If you get caught by the Horned King’s minions early on then Hen Wen will be captured and taken back to the castle where you’ll need to rescue her. The best option is to take Hen Wen straight to the Fair Folk where she’ll be safe. This is included in the walkthrough below.

The Black Cauldron was designed to be a little bit easier for kids to play. For that reason there are only 3 keys you’ll need to remember. Press F3 to select an object from your inventory, F4 to use the selected object and F6 to ‘do’, such as speak, open door, etc.

Speak with Dallben sitting at the table and he’ll ask you to feed Hen Wen. Walk up to the pot on the fireplace and press F6 to take it. It contains Hen Wen’s Gruel. While you’re here walk to the cupboard and open it. Take the Sack, Apple, Bread and the Flask. You’ll need both food and water if you want to stay alive for long in Prydain.

Leave the cottage and walk to the east. Open the gate, which will fall off, and give the Gruel to Hen Wen. You’ll need to be close to her, select the Gruel from your inventory and give it to her by pressing F4. After eating the gruel Hen Wen will run back to the cottage. Follow her back and speak with Dallben to see a strange vision.

Leave the cottage and use the Water Flask on the trough outside the front to fill it up with Water. Walk to the west and then north. Look in the hole in the tree and pick up the Lute. Walk to the north twice. Stay on the edge of the screen in case the Horned King’s thugs arrive and try to steal Hen Wen.

You’ll come across a briar patch. Inside this patch is a secret area which is easy to find once you know where it is. 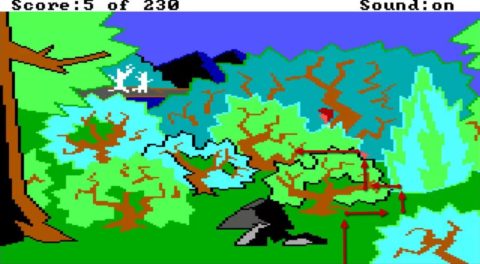 Open the door to the underground house and go inside. Gwystal, one of the Fair Folk, is here and says she will look after Hen Wen. She tells you to find King Eiddeleg and gives you the Magic Word. Open the cupboard at the back, take the Cookies and then leave the house.

Go east, east and south. Along the way you might meet a little creature called Gurgi. If you find him select your Apple and give it to him for a few extra points. Stand at the edge, nearest to the waterfall, select the Magic Word and use it. The rock will lower so you can walk across into the cave. 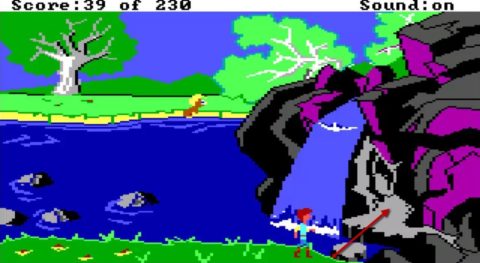 Speak to the King by pressing F6 and then select the Lute and use it to give it to the King. He’ll give you a Magic Mirror and some Flying Dust to deal with the Horned King. use the Flying Dust and fly out of the cave.

Speak the Magic Word again and then go north and north. Pick up the Food Wallet from under the bridge for an unlimited supply of food.

Walk west, west and west. Take the Dagger from the tree and walk north and then east to the rock maze. Once you know how to make your way through it’s not too difficult. 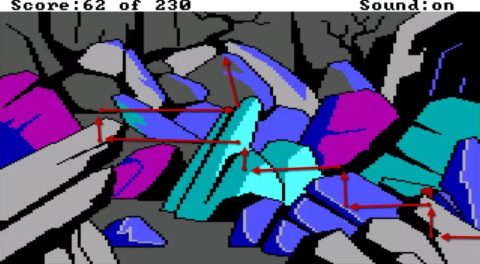 Walk all the way up to the black tree, select the Rope and use it. Press F6 to grab onto the rope and move diagonally up the rope onto a narrow ledge. Climb the rock wall and work your way around to the top of the cliff.

Go north, don’t worry you won’t fall off and then follow the path towards the moat. You can swim across the moat by dodging the crocodiles or walk to the west. If a wagon is there go up to it and hop on board. If not go back east and west again until the wagon appears. Once you’re hidden in the wagon you’ll be taken into the castle.

Walk north to the wine cellar and then walk between the first and second wine casks on the right side nearest to the far door. You’ll fall down into a corridor below the dungeons.

A beautiful young girl will speak with you, Princess Eilonwy. Walk west and west. Use F6 on the stones on the far wall. You’ll start pushing them in one-by-one. Do this four times until you’ve made a path to the room to the north and walk through.

The Princess will escape through a small hole. Grab the Magic Sword from the altar in the center of the room and go south, south and east. Use the gargoyle statue on the wall to open a secret passage and climb up the ladder.

Walk close to the locked door to the north and use the Keys on the door. Head inside and rescue Fflewddur Fflam, the bard. In return he’ll reward you with a special Harp.

Walk south, west and up the stairs to the first floor. Walk east. If you were caught and placed in the dungeon the closet here is where your things will be stored. Go south and south to the room with the drawbridge. Use the Magic Sword on the drawbridge chain to break it and then leave the castle.

Descend down the mountain the way you came, back to the rock maze. Go south, through the haunted forest and south to the swamp. Use Flying Dust to cross to the other side to the south-west. Open the door and go inside. Walk to the Chest and open it. Frogs will escape and three witches will appear.

There’s only one thing to do, go get it back!

Make your way back to the castle and go inside. You’ll need to use Flying Dust to get back across to the swamp. Walk back to the castle, this time the drawbridge will still be open if you broke the chain to escape last time.

Inside the castle go north to the wine cellar and take the secret path between the two wine casks to the corridors below.

After the short cut-scene the witches will return and offer you items in return for the Black Cauldron don’t except any of them until they offer you the Magic Sword.

Congratulations on winning The Black Cauldron. If you followed the walkthrough above you should have completed the game with the maximum 230/230 points.