Defend the Portal – Build defensive towers to stop the enemy from reaching and blowing up the portal. 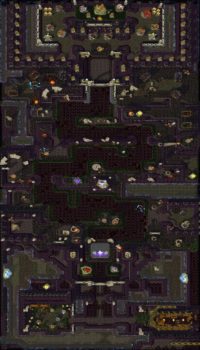 This is a Tower Defense mission that isn’t necessary to win in order to progress with the campaign. You’ll have 5 defensive towers that you can build and all of them can be upgraded.

Cold Tower – Slows units for a time but will not damage magic resistant units.

Once you get the Cold and Death Towers only build them as the slowing of units plus maximum damage is your best chance to win this mission. You’ll need to get through 30 waves of enemies, each progressively harder than the last. Once a certain number get through the portal will be destroyed. Build your towers in the center locations where they can attack enemies in front and behind them.

If you win this mission you’ll get a new hero to play for the next chapter, the Panderan Brewmaster!

Next: Chapter 4: The Search for Illidan