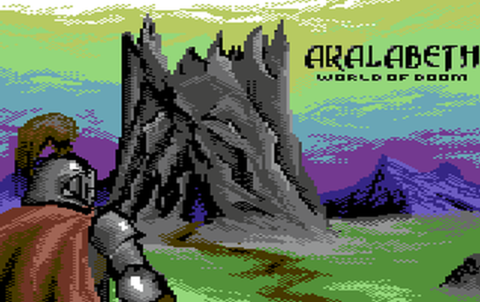 Akalabeth: World of Doom was released in 1979 for Apple II. It was originally designed as a school project and involves going into a dungeon and killing increasingly difficult monsters. You receive quests from Lord British and must delve into an underground dungeon to complete them. You can also visit an Adventurer’s Shop to purchase food, weapons, magic amulets and a shield.

Akalabeth is sometimes referred to as Ultima 0 as the Original Ultima games used many of the same mechanics and storyline. It sold 30,000 copies when first released and made the Softalk top 30 list for October of 1980.

The beginning stages of Akalabeth is very difficult. We’ll be using the Magic Amulet to make life a little bit easier. When creating your character make sure you have at least 22 Gold. Don’t worry too much about your other stats because you’ll be using the amulet to increase them. Also choose to play as a Magi. This isn’t essential but will make using the Amulet easier.

You begin your adventure in an Adventurer’s Shop. The first thing you want to purchase is the Magic Amulet. Spend the rest of your Gold on Food. Leave the shop and if you’re playing on the 1998 version of Akalabeth save your game by pressing Ctrl-S.

Down in the Dungeon you’re able to use your Magic Amulet. Press A to attack, then M to choose your amulet and then 4 for the “Bad??” option. This will either backfire, reducing your HP by a half, turn you into a Toad with base stats of 3 for everything, or turn you into a Lizardman increasing your stats considerably. If you get turned into a Toad you’ll need to reload. Getting turned into a Lizardman is the best outcome. If that happens leave the Dungeon, save the game and return to the Dungeon. Use the Magic Amulet again.

Continue using the Magic Amulet until you have a few hundred points in each of your stats. If you’re playing on a high difficulty to may want to increase your stats even further. Return to a store to purchase Food and then head off to find the Castle.

Once you’ve found the Castle enter and Lord British will give you your first quest. The first two quests are to kill a random creature. Each creature can be found on a different level of the dungeon. Here’s a list of where to find each creature.

Once you’ve killed the creature return to Lord British for your next quest.  You can use the Magic Amulet to create Ladders Up and Ladders Down to make navigating the Dungeons much easier. The last four quests will be to kill a Gremlin, Mimic, Daemon and Balron, in that order. Return to a store any time you need more Magic Amulets or Food.

That’s pretty much all there is to it. If you want more of a challenge try defeating the game with the Fighter instead of the Magi.