Enter the yellow skyscraper to face Rumor Honeybottoms in Honeycomb Herald. There are 3 phases to get through while jumping from ledge to ledge. The ledges will drop down the screen so you’ll constantly be on the move. The first phase is the queen’s security guard.

The Security Guard Bee will fly in from the right side of the screen. He only has one attack, the Bee Grenade, but you’ll also need to deal with Drone Workers flying across the screen. 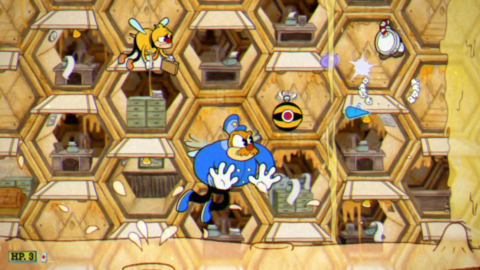 The Bee Grenade will explode, sending flying cone particles in all directions. Keep dodging the grenades and the drone workers while shooting at the Security Guard until he’s been killed.

The Queen Bee will hang down from the top of the screen either in the center, left or to the right. She has three different attacks, the Pink Orbs, Purple Triangles and the Bullet Bees.

The Queen Bee will only use Pink Orbs when she comes down on the left or right side of the screen. You can either parry them or avoid them. The Pink Orbs will slowly move towards you for about 10 seconds before leaving the screen.

The Purple Triangles will also only be used when the Queen Bee is on the left or right side of the screen. The Queen will phase in a large triangle which will then shoot smaller pink triangles from each corner as it rotates. It will then disappear. The small pink triangles can be parried.

The Bullet Bees are used when the Queen Bee comes down in the center of the screen. The Bullets will start at the bottom of the screen and make there way around the platforms to the top of the screen. You’ll need to find the right time to duck under them or drop down to a lower platform to avoid them. 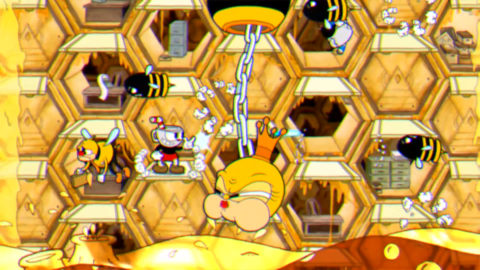 The most difficult part about this phase is trying to be prepared for the various attacks. You know that if she comes down the center you’ll have to watch out for the Bullet Bees so try to stay towards the top of the screen. If she comes down on the sides you’ll have either the Pink Orbs or the Purple Triangles. Keep shooting and after 3 or 4 variations you’ll move onto the last phase.

In the last phase the Queen Bee will turn into an Airplane and appear at the bottom of the screen. She has two basic attacks. The first is the Homing Fists that will move towards you before flying away. The second is the Wing Uppercut where a wing will transform into a fist and punch you. 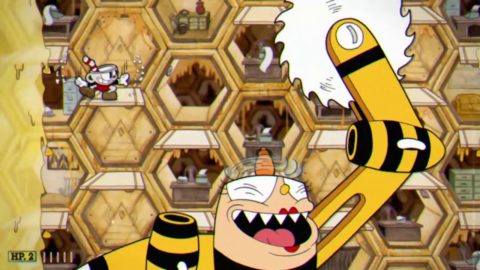 The side that she’s going to punch on is easy to predict as she has to set up the punch first. Continue shooting without getting to close to her and eventually she’ll be defeated.