Once again you find yourself in an aeroplane, this time facing off against a giant robot! Prepare for one of the more difficult boss battles of the game.

Antenna: The antenna on top of the robot’s head will first fire out a harmless thin laser which will show you where the antenna is pointing. It will then fire out a much large laser that you’ll need to avoid. If you shoot at the antenna while it’s using the tracking laser you can stop it from firing its main shot. 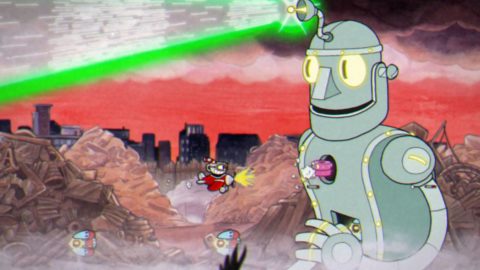 Chest Drone: A pink barrel will emerge from the chest of the robot and fire blue lasers to the top and bottom of the screen. As it moves towards you the only way past it is to parry the pink barrel to turn off the lasers.

Stomach Ships: Little ships will emerge from the stomach of the robot. Luckily they only take a few shots each to kill.

Once you damage any of the above sections the robot will gain another attack.

Head Cannon: When you destroy the antenna the head will turn into a cannon, shooting out golden nuts and bolts. You’ll need to fly around them.

Magnet & Arms: When you destroy the chest cavity the robot can summon either a magnet or an arm. The magnet appears at the bottom of the screen and slowly draw you towards it, making it difficult to steer. The arms will appear on the left side of the screen and move closer towards the robot. You’ll need to hide underneath or above them.

Homing Bombs: Once the stomach has been damaged the robot will periodically send out homing bombs. You can shoot them to destroy them but they have a rather large explosion so make sure you stay clear.

Once all three sections have been damaged a heart will appear. Continue shooting the heart, while avoiding all of the other attacks, until this phase is completed.

The robot’s head will fly back and forth across the screen. You’ll need to dodge it while also shooting the Homing Bombs that will be flying towards you. Continue shooting the flying head until you progress to the next phase.

Finally Dr Kahl will appear from inside the robot head and use it like a flying saucer. It will produce a crystal that will send out hundreds of crystal fragments towards you. At the same time an electrified wall will fly towards you, taking up most of the screen. 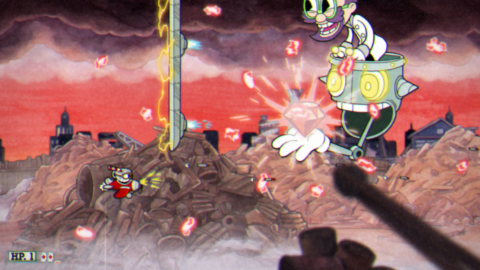 You’ll need to fly around the walls while dodging the crystal fragments and continue shooting Dr Kahl and his flying saucer.