The Murine Corps boss fight is accessed by going into the pink house behind the road closure signs. The fight take place against a rat in a can for the first few rounds and then a giant cat.

For this phase the rat will ride a can like a tank and he has three different attacks:

Garbage Toss: The rat will toss out garbage from the can that will fan out as they move across the screen. One or two of the pieces will be pink so you can parry them. The garbage is easier to dodge if you are further away from the can.

Mousetraps: The rat will throw out a couple of pink mousetraps that will land on the floor. After deploying the mousetraps the rat will move the can over to the other side of the screen. As he comes towards you you’ll need to parry a mousetrap so that you can bounce over the rat.

During the second phase the rat will be in the center of the screen and he’ll shoot flame throwers out from either side. 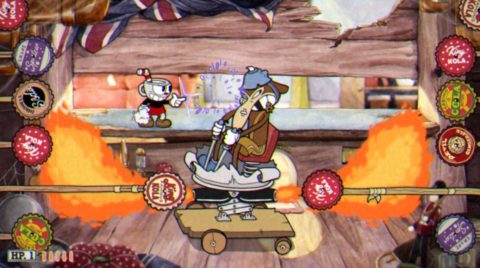 He’ll move up and down so go down to the flower when he lifts up and jump up to the ledge when he’s close to the ground. On top of this the bottle tops will move backwards and forwards, making it more difficult to jump to and from the ledge.

A giant cat will eat the rat and now you’ll have to fight it instead. It’s main attack is to send its paws out to reach towards you from either side of the screen. Avoid them by running to the opposite side. Tiles will also be falling down from above so you’ll need to avoid them at the same time. 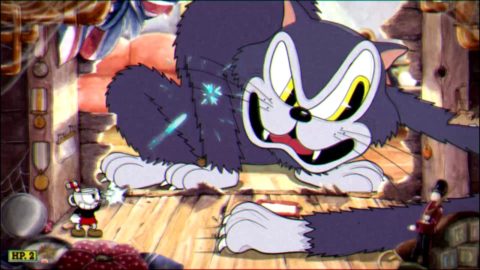 Occasionally the cat will spawn two rat ghosts who will shoot pink pellets towards you. You can parry slap them or dodge them. If the pink pellets hit the ground they’ll turn into two smaller pink pellets that will roll along the floor in either direction. 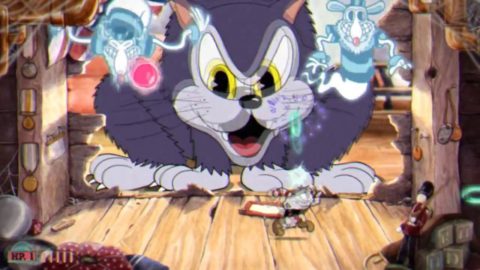 To kill the cat continue shooting it in the face until it’s knocked out.