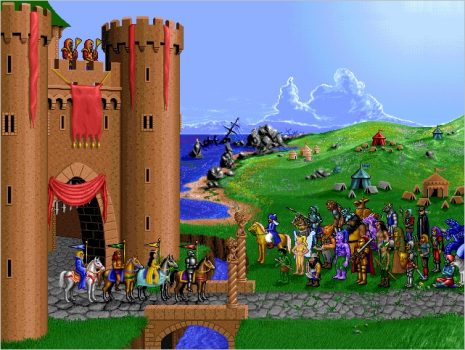 Heroes of Might and Magic: A Strategic Quest is a turn-based strategy game in a mythical world of dragons, goblins, unicorns and of course heroes. It was developed by New World Computing and released for PC DOS in 1995. A Windows version was released the following year.

Heroes 1 takes place in a land called Enroth. You play one of four heroes, the knight Lord Ironfist, the barbarian Lord Slayer, the sorceress Queen Lamanda or the warlock Lord Alamar. The each have unique abilities and access to different creatures from their castle.

Tha campaign consists of 9 scenarios but you’ll only play through 8 of them. For some of them you’ll need to wipe out the enemy completely, for others you’ll need to find an artifact or take over a specific castle. 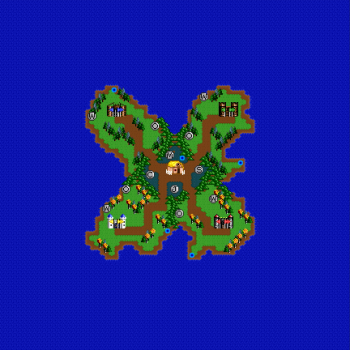 Objective: Take over the central town.

This is a straight forward battle between the four heroes on a fairly small map. To win you need to capture the central town.Each of the heroes starts with one castle on one of the arms of the island. To the northwest you have the Warlocks, to the northeast the Barbarians, the southeast the Knights and the southwest the Sorceresses.

There’s no need to take out the enemy heroes but you can if you want to. It will help you to build an army quicker if you take over at least one of the opposing hero’s castles.

The Dragons to the east of the Gateway town protect the Obelisks that show the location of the hidden artifact. There are 5 Dragons in this encounter so make sure you have enough units to deal with them.

The central town is protected by a single Dragon. When you’re ready kill the Dragon and then mop up the few smaller units inside the town itself. 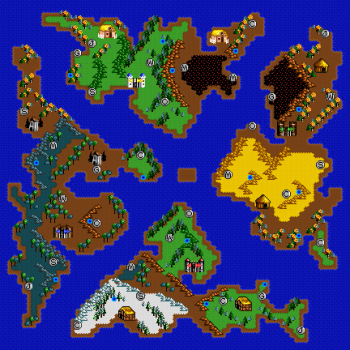 Each of the heroes begins on an island with one Castle. There are two other towns on the island of the same type that you should try to take over fairly quickly. You should also be able to find the resource that you need to build your 6th level unit somewhere on your starting island.

Each island has a portal that will teleport you to one of the other islands randomly. After a little while enemy heroes will start using the portals but the first heroes will probably arrive by boat.

The central castle is protected by 5 Dragons. Defeating them is not necessary but if you do manage to take the castle the Dragons will give you 1,000 Gold per day and will protect the castle from other heroes.

When you’re ready to go after the enemy heroes use the map above to find their main Castle. Taking out their starting castle will severely cripple them as they may not have upgraded their other towns. Then all you need to do is hunt down any remaining heroes to complete the mission. 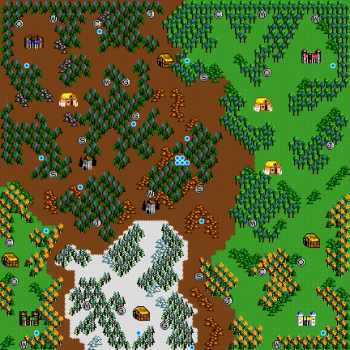 Objective: Find the Eye of Goros

You don’t need to worry about the other heroes too much for this mission, as long as you protect your towns and castles. You’ll begin with one Castle of your chosen Hero in one corner of the map. You should be able to expand out to one other town fairly quickly.

Resources are scattered around the map so you may not have enough to build your high level units. Gold is also difficult to find.

Send at least two Heroes out to explore the map and hunt down as many Obelisks as you can find.  After you’ve found close to half of the Obelisks you should have a good idea where the artifact is located. Send one Hero to start digging in the general area. You’ll need a full day to dig for the Eye of Goros. If you’re successful the mission will end and you’ll move on to the next scenario. 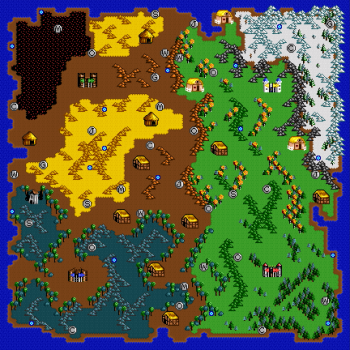 Free-for-All is a large map with very little ocean area. Each hero begins with a single castle and there are 14 towns to take over. It can be very difficult to secure the towns while hunting down enemy heroes. For this reason you’ll need multiple hereoes with large armies.

Once you have 3 or 4 of the towns under your control Gold shouldn’t be a problem. You can get unlucky if all of the heroes decide to march towards your lands. Hopefully they’ll fight amongst themselves a little bit so you can build up an army.

Just like scenario two, The Archipelago, you want to target the enemy starting castles first. Not only does this give you access to all the best units and spells but you’ll limit the enemies ability to replenish their top tier units.

This map may take a while to complete but be patient with it and try to protect your towns and castles from enemy heroes that wander past. Once all the enemy castles and towns are under your control and there are no enemy heroes on the map the mission will be complete. 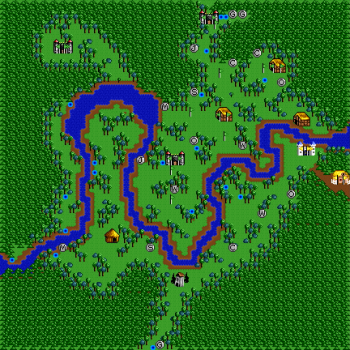 If you are playing as Lord Ironfist you’ll skip this scenario. You begin on the south side of the river with a Castle and Town from your faction. Explore the area south of the river to find another two towns.

Castle Ironfist is in the north west corner of the map. The only way to reach it is by boat or by using a Dimensional Door spell. Boats can only be made from the town directly north of your starting Castle, on the other side of the river.

Once you’ve had just enough time to explore the south side of the river the Knights will attack. They will come either through the Portal or by boat. If they sail across the river they’ll leave a boat which you can use to sail over to Castle Ironfist.

It isn’t necessary to clear out the map but you will need to have a big army to defeat Lord Ironfist at his castle. 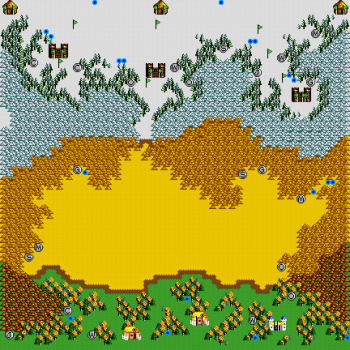 If you’re playing as Lord Slayer you’ll skip this mission. You begin on the southern side of the map with a castle of your chosen faction. There are two other towns to the west that you should take as quickly as possible.

There are only a few resources in the vast desert and no towns or castles. Traversing across the desert to the north will be difficult without a barbarian hero or the Dimension Door spell. To make matters worse the enemy barbarian heroes will stream south across the desert before you’ve had the chance to fully explore the southern green area.

You will need to play a defensive role for the first half of this mission. Make sure you have troops in your main castle and keep units in the other two towns/castles as well. Barbarians are surprisingly fast and can take over one of your towns before you realize they’re near.

Take the time to build level 4 Mages Guilds before moving your heroes across the desert. The Berserk spell will be the most useful against Lord Slayer but other spells such as Teleport or Meteor are fine as well.

When you cross the desert take the first barbarian castle to the north of the pass. You can use this as a place to hold your troops while you build up forces. When you’re ready send your hero, or heroes, to Castle Slayer to the east. A couple of Berserk Spells on one of his large stacks of units will severely weaken his army, making the castle easier to take over. 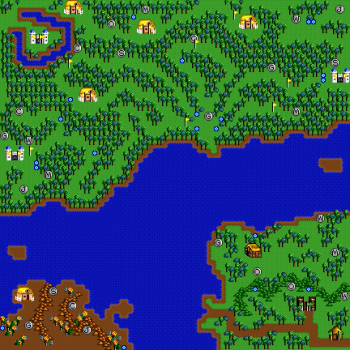 If you’re playing as the Sorceress Lamanda you’ll skip this mission. You begin with a castle and town of your chosen faction in the south-east corner of the map. This map is significantly easier than the last because you can take as long as you want to build up your army.

Take over the third town on this island and then use the Portal to teleport a hero to the south-west island. Here you’ll find one more town. After turning it into a castle you’ll be able to build a Docks and Boats.

With a large army of your finest units sail across the sea to the only entry to Queen Lamanda’s lands. You can ignore all the other heroes and castles and head straight for Castle Lamanda in the north-west corner of the map. Enemy heroes will avoid you if your army is big enough. Defeat Queen Lamanda at her castle to complete the mission. Once again the Berserk spell works the best to cause large amounts of damage to multiple stacks of units. 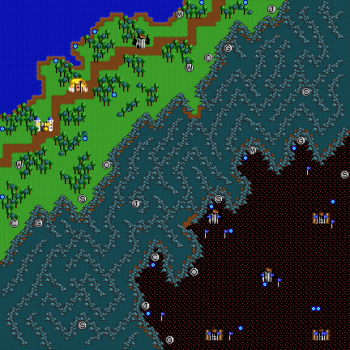 If you’re playing as the Warlock Alamar you’ll skip this mission. You only have three towns/castles on your side of the map but you have all the time in the world to build up an army.

Explore your side of the map and grab all of the resources. Make sure you build the level 4 Mages Guilds for the extra spells. Dimensional Door will make it much easier to get through the maze and Berserk is great for dealing with multiple large stacks of units in castles by getting them to fight each other.

This mission is just like the previous three missions. Take your hero with all your best units to Castle Alamar in the south-east corner of the map and defeat the Warlock. Once the castle is yours the mission will be complete. 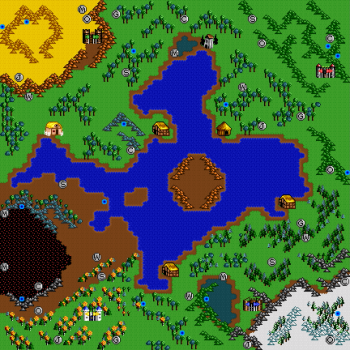 This is the most difficult mission in the game and you really need to know what you’re doing if you’re going to survive. Use the map to plan out what resources you’re going to need so you can start making your tier 6 units as soon as possible. Because you have such a limited amount of time before you’ll be attacked I didn’t bother wasting resources with Mages Guilds.

To get to the Dragon Citadel you will need to take one of the towns by the lake. The town directly north of the Citadel is a Warlock town where you can make Hydras and Dragons so I like to hold onto this town for as long as possible. Not only will you have the tier 4, 5, and 6 units from your faction but Dragons and Hydras from this castle as well.

Grab what you need as far as resources are concerned and then keep most of your units in your castles. If you get the opportunity you can snipe out one of the enemy heroes with your own.

When you are ready bring a hero with your best units from your first castle to the castle that you’ve captured on the lake. Combine the units for the best army and sail out over the lake to the Dragon Citadel.

You’ll need to get past a stack of Gryphons before attacking the Citadel itself. Inside you’ll find 20 Dragons. They are immune to spells but you can still cast Bless on your own units if you bothered with building the Mages Guild. Once the dragons have been defeated the Citadel will be yours.