In Space Quest 3 Roger Wilco has been left adrift in an escape pod after fleeing the exploding rock fortress of Vohaul. Mistaken for a piece of scrap the escape pod is spotted by a nearby junk freighter and taken aboard.

Roger wakes up from his long sleep to find himself, and his pod, captured by a robot controlled freighter. The escape pod has used up all of its energy so it’s no use to Roger anymore.

After walking out of the escape pod you’ll notice a circular object on the floor. “Look object” to see that it’s actually a Warp Motivator. It’s too heavy to pick up now but you’ll need to remember where it is for later.

Walk to the south and you’ll notice various abandoned space craft littered on the floor of the junk freighter. There’s nothing for Roger to do here so continue heading to the east. 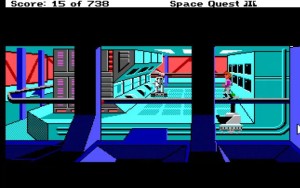 Head west along the rail three screens until you arrive at the monitoring room.

Position yourself above the grabber and “get in grabber”. You can now move forwards and backwards along the rail.

Move to the west so you do a u-turn and stop at the first screen to the east. This should position the grabber above the escape pod. The grabber needs to be about two thirds of the way across the screen to be above the Warp Motivator. When you are there “press claw” to drop the claw and pick up the motivator.

Continue along the back rail to the east until you come to the end and do a u-turn. On this screen you need to be positioned on the front rail just in front of the u-turn. “Press claw” again to drop the motivator into the space ship below. 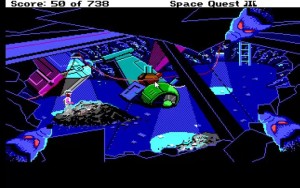 Take the grabber back to the control room and “get off”. Walk into the center bin to the south of the robot. This will drop you into a pile of trash in a lower room. Rats will pear at you from the shadows. The lights are on so they must have power in here.

“Look wires” to see that the wires disappear into a hole to the left. Walk to the left and “look hole”. A tiny reactor powers this room. “Take reactor” and then “climb ladder” on the other side of the room.

Walk north, east and then east. Inside the tunnel you’ll be attacked by a rat whose not too happy about you taking their reactor. Look in your inventory to see that it’s missing.

Head back west and then south. “Climb ladder” behind the tie fighter into the room with the rats. Once again “take reactor” from the hole on the right and “climb ladder” back out.

This time before you leave “take ladder”. You’ll need this to escape.

Walk north, east and east into the tunnel. “Take wire” and continue to the east. Outside of the tunnel you’ll see what appears to be a gigantic transformer head. Position Roger next to the broken eye and “climb” inside. 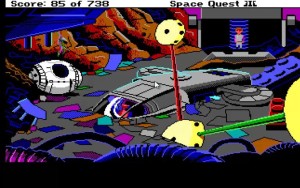 The ship in the center is the Aluminum Mallard. That’s the one we’ll be using to escape.

Walk around to the southern side of the ship, just near the hatch, and “use ladder”.

“Climb ladder” and then “open hatch” to get inside.

Type “sit” to go to the cockpit.  Before you do anything else “search seat” to find seven buckazoids!

“Look screen” and press 1 for engines. Press 7 for radar and then 3 to takeoff.

Movement will be halted due to an obstruction. Press 8 to engage your weapons system. Place the shields to the B back and then press space to fire. You’ll blast a hole through the side of the junk freighter and escape.

After the cut scene “look screen”. Press 2 for the navigation system and then 1 to do a scan. Scan until you find Phleebhut and then press 2 to set course. 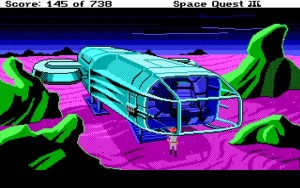 Hit 5 for light speed. One you arrive press 3 to land on the planet.

“Stand” and then “push red button” to open the ramp and get out.

Walk west, west, north and north to find the World o’ Wonders. Go inside and have a chat with Fester Blatz.

Sell the gem in your inventory. Say no twice until he offers you 425 buckazoids for it. With that money you’ll be able to buy the Orat on a Stick, hat and the thermoweave underwear. Have a look at the postcards if you want and then “exit” the shop.

Outside you’ll get an unfriendly greeting from Arnoid, a robot terminator, who was sent to recover funds for the mating whistle you didn’t pay for in the last episode. There are two ways to deal with him. Either wait under the outcropping with the spores on the roof. When Arndoid walks past he’ll be caught up and his invisibility belt will be spit out.

The second way doesn’t earn as many points but might be more fun. Head west from the World o’ Wonders and go up the lift. “Push pulley” when Arnoid follows you and he’ll be pushed into the machinery.

However you deal with Arnoid “take belt”. If he was captured by the pods “use stick” when you are near the belt so you don’t get eaten yourself!

Go back to the ship and “sit”. “Look screen”, engage the engines and takeoff. Have a look at the navigation system and do another scan.

This time we want to head to Monolith Burgers. Set a course and enter light speed.

When you dock at the station head west to find an open counter. Approach the employee and “look menu”. Press 7 to order the Monolith Fun Meal. 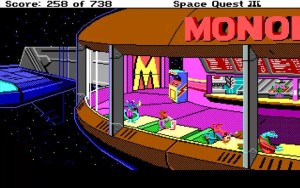 “Sit” down at the only empty table and enjoy your meal, “eat meal”.

Inside your burger you’ll find a decoder ring. Go over to the arcade game and “look game”. This is a game of Astro Chicken which contains a hidden message if you can win.

“Insert buckazoid” and slowly flap the chickens onto the landing pad. You’ll need to land 10 chickens to win the game and get the secret message.

When you see the secret message “use ring” to see the code for it. If you can’t be bothered figuring out yourself here is the message.

“Help us! We’re being held hostage by Scumsoft on the small moon of Pestulon. An impenetrable force field surrounds the moon. It must first be deactivated. Its origin is unknown to us. Scumsoft security is armed with jelly pistols. We’re counting on you, whoever you are.

Head back into your ship, engage your engines and open the navigation system. Scan until you find the planet Ortega and set course for it.

Land as usual on the planet Ortega but before leaving the ship make sure to “wear underwear”. This will keep you safe from the extreme heat. Walk south, east and south across the bridge. Go south once more and you’ll see some guys working with their equipment. 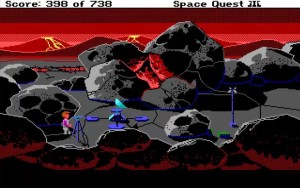 After a while the two guys will leave, giving you a chance to examine the site. Walk up to the telescope and “use telescope”.

The force beam generator is centered on the moon of Pestulon. You’ll need to disable it before heading to Pestulon.

Walk over to the green crate on the right and “take detonator”.  Just behind the crate “take pole”.

Head east up the volcano until you reach the rim. Follow the path north into the generator. From here you’ll see a ladder in the distance. Work your way around to the base of the ladder and “climb ladder”. At the top of the generator stand on the edge of the hole and “drop detonator”.

Run back to your ship. The rocks that make up the small bridge have collapsed. “Use pole” to pole vault your way across to the other side.

Take off and scan this area of the galaxy once more. This time the moon Pestulon will be available. Set a course to it and land. 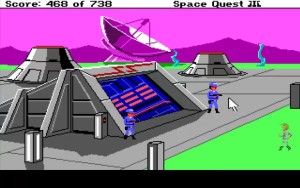 To the east of your landing site you’ll find the entrance to Scumsoft. “Wear belt” and “use belt”. Enter Scumsoft. You’ll have just enough time to get past the two guards without being seen.

“Push button” to open the door which takes you into a curved corridor.

Head south. To the right is a door that needs a key card and does a face scan. Leave it for now and keep heading south.

The next door to the left is a janitor’s closet. “Search closet” and then “take coveralls”. Inside the coveralls Roger will also find a trash vaporizer. 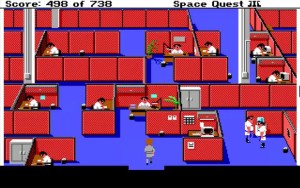 Continue heading south and take the next door to the right. This is the main work area.

Walk to the west and “use vaporizer” on all the bins as you pass them. On a wall you’ll see a picture of Elmo Pug. “Take picture”. Walk over to the photocopier and type “make copy of photo”.

Go back to the wall and “put portrait back”.

Walk to the top of the screen here and go east. Go north and you’ll see Elmo Pug sitting at his desk. Empty his trash and then follow the path to the east overlooking the ship bay. When you come back Elmo will be gone and he’ll have left his keycard on the desk.

“Take keycard” and go all the way back to the curved corridor. Go south and the next door on the right will be the security door. “Use keycard” and then “use photo” to get access. 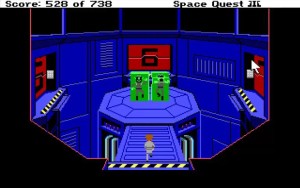 Type “push button” and then “use vaporizer” on the two guys stuck in jelly.

You’ll be led out to play Nukem Dukem Robots with Elmo.

You lose energy when you punch as well as be hit so the best strategy is to let Elmo come to you and punch him when he gets close and block his attacks.

When you get in the Mallard with the Two Guys look at your screen and go to attack speed. Shift your shields to the direction that the attacks are coming from. Lock onto the enemy ships and fire when you can. After taking out a few of them the others will retreat.

Space Quest 3 is a graphic adventure game by Sierra On-Line and released in 1989. Designed by Mark Crowe and Scott Murhpy, Space Quest 3 is the third installment of this enjoyable series and continues the adventures of Roger Wilco.