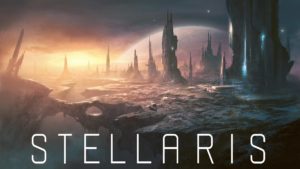 Stellaris is a grand strategy game developed by Paradox Development Studio and available for purchase on or after May 9th 2016. The game is set 200 years in the future where you get to explore the vast expanses of space and expand your empire.

The galaxy and races in Stellaris are procedural generated so you’ll have a different playing experience every time. Stellaris is a deep exploration game with 1,000s of planets to find and develop. There are also space anomalies to investigate. The game features a ship designer so that you can create your own space ships based on your level of technology.

While the game is currently not playable until the release date Paradox have been giving us a few teasers by streaming online game footage.

From the beginning of the game you’ll be able to customize your own species, including how they look, which may affect the way other species react to you. You can choose from Arthropoid, Avian, Reptilian, Mammalian, Molluscoid, Plant and Fungoid. 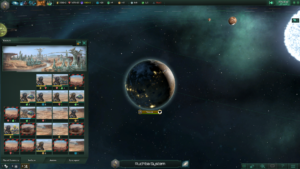 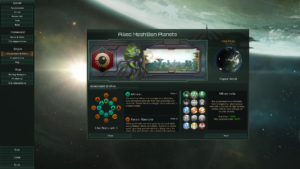 Once you have your appearance you’ll be able to select special racial traits. Some traits are good like Strong, Enduring or Charismatic. Others are bad like Solitary, Weak or Repugnant.

Why would you want to choose bad traits? Bad traits may be necessary if you want to spend more points on a more powerful positive trait. You’ll only have 2 points for racial characteristics but by choosing a bad trait you’ll be given more points that you can use for more expensive characteristics, such as Venerable, which costs 4 points.

Aside from the appearance you’ll be able to choose the type of starting planet your race is on, form of government and basic ships weapons and equipment. All governments have a certain ethos and you’ll have 3 ethic points to pick an ethos such as Collectivist, Materialist or Spiritualist. Government types will depend on the kind of ethos your society has.

With many strategy games the winner is already decided by at least the half way mark. This can cause the game to become boring when one player begins to steam roll the others and is virtually unbeatable. Paradox have been working on this issue to make the game more interesting and varied. 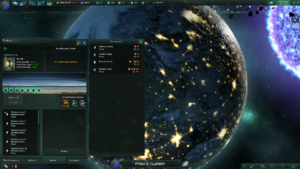 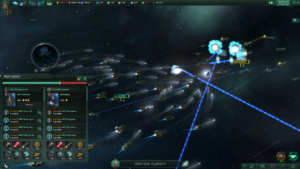 For a start there are going to be challenges for you no matter how big your empire becomes. There’s not time to rest on you laurels and take over the galaxy slowly with your huge empire. Political factions will rise up and need to be dealt with or you may risk losing your empire.

Paradox have also included highly effective late game technologies so that smaller empires can deal with their larger competitors. If you’ve been losing  up until the late game you’ll still have a chance to come out on top. This will hopefully keep the players entertained for the entire game. We’ll have to wait and see how it actually plays out once we get our hands on the game though.

There’s the possibility for example, that using high tech robots may turn out to be a bad thing. Should they become sentient they will rise up against you, creating their own empire and quickly outpacing you as far as science and technology goes. 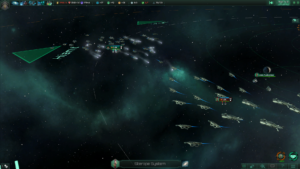 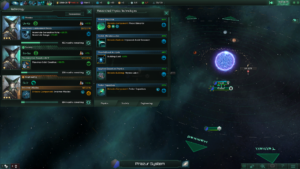 The third way Paradox deal with late game issues is the introduction of late game crises. They’ve been a little shy in explaining exactly what they mean because they want the players to find out for themselves what challenges await them, and fair enough too. We do know that one of the late game crises is called ‘Queening’.

As you explore the galaxy your empire will grow larger and large. The bigger your empire the harder it will be to keep all of the varied factions in check. Explore too far and you may find that your main race is actually in the minority! This will reduce happiness across the empire and leave you open to the uprising of different factions.

Democratic Governments will have elections from time to time. All of the faction leaders are a viable option for government and because the population gets to vote independently you may find yourself losing control of one of your planets! It doesn’t happen automatically but over time the faction can grow in influence and from what I understand break away from the main civilization. 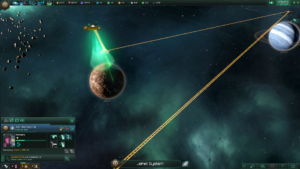 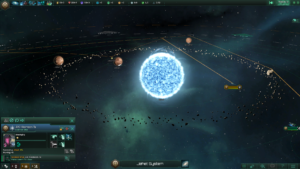 The galaxy is a dynamic place and Paradox want to bring the challenge of holding together a large empire into the game. You can influence these factions but it of course comes at a cost.

The developers of Stellaris over at Paradox appear to be passionate about the game and are listening to community feedback, which is always a good thing. So far the concept looks fantastic and a little closer to the date I hope to bring you more of a sneak peak into what this game is about. Until then stay tuned for more exciting news!