The Frozen Throne – You must capture the four obelisks before Illidan gains control of them. 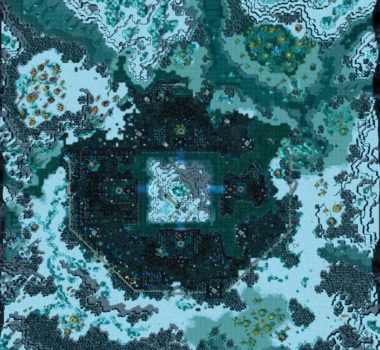 This mission is undoubtedly the toughest in The Frozen Throne. Not only do you have Illidan respawning very quickly but Lady Vashj of the Naga and Prince Kael’thas of the Blood Elves attacking from the north and east.

First grab your group and take out the small Naga camp just south of where you started. There is a second Gold Mine to the north so send up an Acolyte to claim that one as well. In between is where your main base will be located. You’ll need lines of Spirit Towers on the eastern side to stop Lady Vashj and some on the north to stop Prince Kael’thas.

Lady Vashj will tear through the Spirit Towers with her tornado ability so whenever she attacks make sure you have reinforcements on the way.

Illidan will begin taking the Obelisks. You have a little bit of time but you must get to the western Obelisk before he has taken all four. Your starting group should be enough to claim it anyway. Once you have it haunt the third Gold Mine just to the north of this Obelisk and start building Spirit Towers. About 15 to 20 should do. You’ll need them to stop Illidan in his tracks.

Now that the first Obelisk is protected you can start building a force to take down the Blood Elves and Naga. It doesn’t really matter which one you go for first but I took out the Naga base because Lady Vashj was giving me lots of trouble and carving through my Spirit Towers.

There are a few ways you can do this. One of the safest is to produce a group of 12 Warlocks with 4 Meat Wagons. Research all the upgrades for the Skeletons, Warlocks and Meat Wagons. The Meat Wagons need to be able to generate there own corpses or this won’t work. An Obsidian Statue replenishing mana is also very handy. You’ll still have some food quota left over so pick whatever you want. Banshees are a nice addition to this group.

When your army is ready bring it outside one of the bases. Start spawning Skeletons and send them into the base to wreak havoc. Keep going until the whole base has been destroyed. Rinse and repeat with the other base.

You can keep one group, including a hero or both near the first Obelisk as keeping this safe is the most important goal. Illidan will attack regularly so you’ll need to keep replacing the Spirit Towers but you should have plenty of gold.

After Illidan attacks take your hero group to secure the northern Obelisk. Take a few Acolytes and build as many Spirit Towers as you can. Illidan will probably attack this one very soon so keep your forces around to protect it.

Once Illidan has gone down again send Arthas and your troops to the southern Obelisk. Once it is taken sweep up around to the eastern Obelisk. Hopefully you’ll be able to capture it before Illidan returns.

That’s all there is to it. Enjoy the final credits. Congratulations on completing The Frozen Throne!

Next: Bonus Campaign – The Founding of Durotar Act 1