Rescue the Crypt Fiends (Optional) – There are a few Crypt Fiends trapped around the map. Find and rescue them. 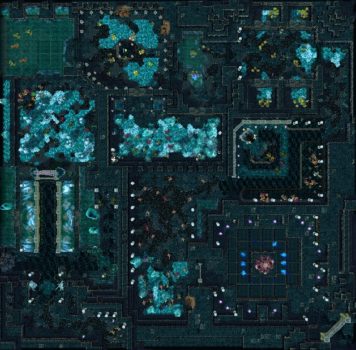 The Forgotten Ones Walkthrough

When you walk to the north you’ll notice some towers guarding the path. You’ll need to flood them before making it through. First pick up the first Gold Coin to the right. Then continue up. Kill the Spiders and pull the lever to flood the eastern towers.

Continue to the north onto the platform. It will lower, allowing the crabs to attack you but they’re not too tough. One of them will drop a Ring of Protection +3. Head to the east to find the Belt of Giant Strength +6 on a pressure plate. It’s a trap obviously and when you grab it Scorpions will tunnel up from the ground.

For the optional quest break the Rolling Stone Door to the south and free all of the Crypt Fiends inside. Then break the other door to the north to the Fountain of Health. The third Gold Coin is lying on the ground just to the north.

On the other side of the door to the east is the Spider room. Kill the giant spider first and then pull all of the four switches to stop the little spiders from spawning. In one of the egg sacks in the north east you’ll find the fourth Gold Coin.

Break the door to the east and walk down to the south to face the Nerubain Spider Lord and his minions. The last Gold Coin is in a crate on the eastern side of this room. Continue west and make your way through the Faceless Ones. Free the remaining Crypt Fiends and break the Icy Gate to the east.

The Forgotten One – In spite of his size this creature should be no match for your group especially if you’ve rescued all of the Crypt Fiends. He has 4,000 health but doesn’t hit too hard and there’s only one of him. Once he’s been killed the mission will end.

Next: Chapter 7 Part 3: Ascent to the Upper Kingdom