The Return to Northrend

The Landing – Purchase a Transport ship and take your troops to the Blood Elf camp.

Dragon Hoard (Optional) – A great dragon called Sapphiron resides in the north east. Slay him to gain access to his hoard of treasure.

Breakthrough – Defeat the Guardians and escape to the north west of the map.

Dragon Hoard – Includes various Tomes and items such as the Horn of the Clouds and Claws of Attack +9. 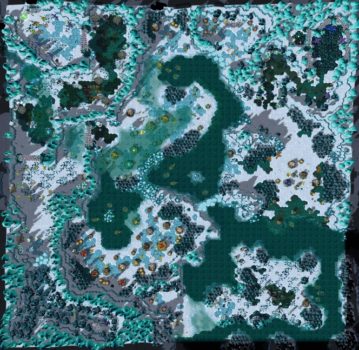 The Return to Northrend Walkthrough

This is a fairly difficult mission if you try to wipe out all the enemies on the map. There’s no need to wipe out the Blood Elves so you can largely ignore them. Instead focus on destroying the Naga camp and then make your way to the exit.

The Landing – You begin on an outcropping in the south. There are some creeps to the west that you can kill or just go straight to the Shipyard and buy a Transport and at least one Battleship. Take the Battleship north and begin peppering away at the towers on the coast. Once the towers are clear send in your units and unload them at the Blood Elf scout camp. Destroy the camp and the basics of your base will automatically be set up for you.

Dragon Hoard – When your base defenses are established build a group of Crypt Fiends and a few Abominations. Take them north with a hero, probably Arthas because of his healing ability, to defeat the dragons. Sapphiron is no chump so you’ll need a strong force to defeat him. Once he’s been defeated he will join your side so it’s worth going for. On top of gaining Sapphiron you’ll get access to his hoard of treasure that contains a number of Tomes and other items such as the Horn of the Clouds and Claws of Attack +9.

Breakthrough – Buy Frigates and Battle Ships and sent them along the river to the north. Start destroying the Naga base and then bring your two heros and main group to land on the shores of the Naga area. Bring your Battleships around to destroy as much of the base as possible while your ground troops move in as well.

Once the Naga base has been defeated you can take over their gold mine. Take your main group through the archway on the western side of the Naga base. Continue to the west and then all the way down to the bottom of the map. After killing the Arachnathids follow the hidden path through the woods to the south. At the end of the path you’ll find the Penguin King who will give you a gift, the Ring of Protection +4.

Now work your way up to the north and fight your way through until you reach the exit.