Chapter 2 of Space Quest, Vohaul’s Revenge, takes place shortly after the events of the first episode.  After having his plans thwarted by Roger Wilco, Sludge Vohaul is furious and stops at nothing to get revenge.

Roger has been assigned to the Xenon Orbital Station 4 and knows nothing of Vohaul’s consuming rage. Unwittingly Roger falls into a trap and is kidnapped by Vohaul who plans to destroy Xenon.

You begin by sweeping up the outside of the Orbital Station when you hear a beep from your watch and let go of your broom, which floats off into space. Well done Roger! 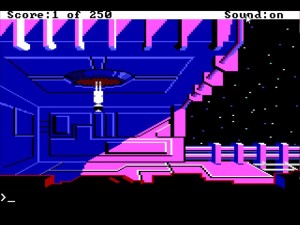 “Look watch” and you’ll notice there are three buttons you can press, H, C and T. Press H for your daily horoscope. C will give you a message from your boss who’s tells you to get inside and clean up a mess aboard one of the newly arrived shuttles. T will give you the time.

Walk over to the wall where your clothes are hanging and type “change clothes”. If you check your inventory you’ll notice you still have the Dialect Translator from the last episode and an Order Form.

Go to the lockers on the right and “open locker”. Inside the locker you’ll find your Rubix Cube Puzzle and Athletic Supporter. “Take puzzle” and “take supporter”. Close the locker and head out the door to the left.

A shuttle has just finished transporting passengers from the planet down below. Walk into the shuttle. There is no mess here, only two guys who want to knock you unconscious! You’ll get a message from Vohaul and then be taken down to the planet.

After crashing in the jungle “search guard” and “take keycard”. Go to the crashed hovercraft and “search hovercraft”. You’ll notice a button with a flashing light next to it that seems to be emitting a beep. “Press button” to turn this off.

To the east are giant mushrooms which will eat you if you get too close to them so head to the north instead.

To the east you’ll here a twang. We’ll check that out later. For now head to the west and you’ll see some blue spores on the ground. Get close to them without stepping on them and “take spores”. 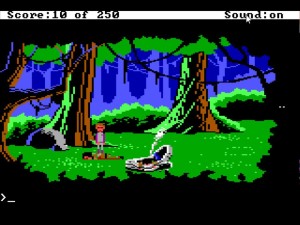 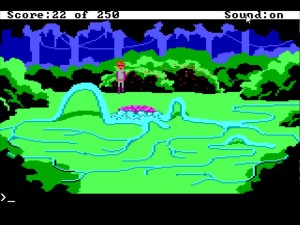 Walk to the north and you’ll see a strange pulsating vine creature. If you touch any of the vines you’ll be entangled and eaten. Walk carefully around the vines until you find your way to the berry bush. “Take berries”.

Make your way back again and head to the south and then the east. Go east again to find a little creature caught in a trap. “Untie man” and he’ll run off but not before taking a good look at you.

Go back to the west and west again, this time take the higher path to the west. There is a strange mailbox here. Luckily we have an order form. “Mail form” and almost immediately your item will arrive. “Take whistle”.

Go east and east until you’re at the edge of the swamp. Some unknown creature lurks beneath the water. “Rub berries on self” to keep the creature away. 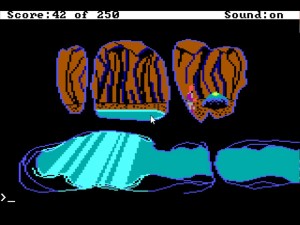 Walk to the east and go to the top part of the screen between the two trees. You’ll find a deeper part there were you will start swimming. “Hold breath” and you’ll dive under the water. Swim to the bottom of the lake and then to the left. Go up into the underground cavern.

Inside you’ll find a sparkling glowing gem. This will come in very handy later on. “Take gem”, “hold breath” in the water and swim back up to the top.

Walk east twice until you come to a large fissure with a dead tree by the side of it. “Climb tree” to get across and continue to the east.

Go close to the vines and you’ll get tangled up in one of them until you lose consciousness. Once you awaken you’ll be trapped in a cage with a large beast sitting outside.

“Talk beast” a few times until he walks closer to you. “Throw spore at beast” and he’ll be knocked unconscious by the fumes. He should land close enough for you to “search hunter”. “Take key” and then “unlock cage”.

“Open door” and “take rope” that’s sitting on the rock. Walk to the north, making sure to avoid any guards if they get close on a hovercraft. Continue to the west twice until you come to the fissure. 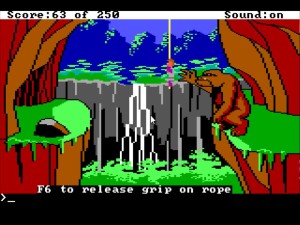 “Climb log” and then “tie rope to log”. Lastly “climb rope” to head down into the fissure.

There is a giant beast here that will grab you if you get too close. “Swing rope” and press F6 once you gathered up momentum and think you can jump to the ledge on the left.

To the west is a dark cave, too dark to see. “Hold gem” to light the way.

As you walk to the east you’ll fall down a hole to the bottom of the fissure. Make sure you “take gem” before you continue. The pink looking creatures are also here and look at you before running off.

Follow the creatures to the south and they will thank you for saving one of their kind. To get out of this area you need to simply say “the word” and they’ll push open a rock for you. Get close to the hole and “climb ladder”.

It’s pitch black in here so “hold gem in mouth” to see better. You need to work your way down and to the east until you come to a beautiful underground lake. Walk to the east and take the right tunnel to the north-east. You’ll then be dragged into a whirlpool and dragged out into an open lake. 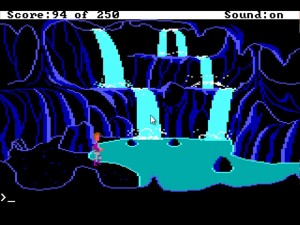 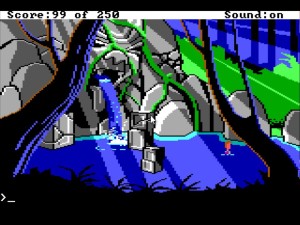 Walk to the east. There appears to be no way through the rock to the north. “Blow whistle” to call the Labian Terror Beast who will crash through the rock. Before he whirls into you “throw puzzle at beast”. This will keep him occupied while you make your escape.

Go over to the rocks and “take rock”. Head to the north and hide behind the bushes. There is a guard walking from left to right on a large platform.

“Sling rock at guard” to take him out. You can also run for the elevator as the guard faces away from you but this isn’t as fun. Walk over to the elevator door and “put keycard in slot”. 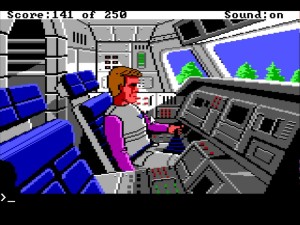 At the top of the platform is a small shuttle. Walk to the back of the shuttle and type “get in shuttle”.

The first thing you need to do to get off the planet is “push power button”.

The shuttle either goes up and down or horizontally to the left or right. We want to go up so “turn attitude dial” so it faces VAC for vertical control.

“Push thruster button” and then “look monitor” to see how to control this shuttle. Forward is for descending and backwards is for ascending. Press backwards to ascend.

Soon you’ll get a message from Vohaul. This can only mean trouble for Roger!

Once you’ve been forced aboard the asteroid walk to either the east or west and get in the elevator. There are four levels you can go to, one, three, four and five. You are currently on level one. On each of these other levels is a janitor closet where you need to find some items. “Push button” outside each of the closets to open it. It doesn’t matter which one you go to first.

Level 3: Inside the janitor closet you’ll find a plunger. Stay away from the floor polisher robot!

Level 4: There are toilets here. Go inside the empty stall and “take toilet paper”. Inside the janitor’s closet you’ll find a glass cutter.

Level 5: This level holds caged animals. One of the aliens will escape and start chasing you. Whatever you do DON’T let her kiss you. Inside the closet is a wastebasket and overalls. As you pick up the overalls a lighter will fall to the floor. Pick this up also. 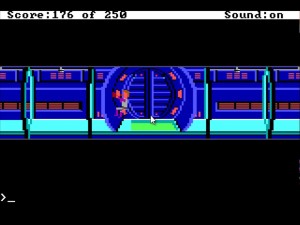 Once you have collected all of the above items you’re ready to head down to level 2. You get there by taking the stairs down from where your shuttle landed.

Once on level 2 you’ll be locked in and the floor will start to slide away from under you. Just as you’re about to fall in the acid “stick plunger to wall” to save yourself.

Once the walls have disappeared “put paper in basket” and “drop basket on floor” under one of the sprinklers.

“Light paper” to set it on fire which will engage the sprinkler system. The fire will be extinguished and the robot guards will be short-circuited. Walk to the east into Vohaul’s secret chamber.

Walk up the steps closer to Vohaul and he will miniaturize you and place you in a glass container. “Use glass cutter” to free yourself. Move closer to the vents and “climb in vent”.

This is Vohaul’s life support system! Move close to the red button at the back and “push button” to turn it off. “Climb in vent” again and walk along the desk to the west.

Go to the off/on switch and “pull switch”. On the display you’ll see “reduce or enlarge?”

“Type enlarge” then run back to the glass container. You’ll be your normal size again, phew! 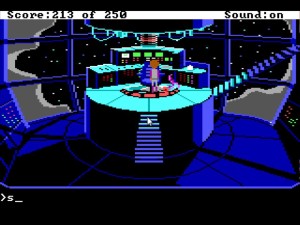 “Search Vohaul” to notice a code on his arm, SHSR.

Go to the computer and “look screen”. The clone launch has begin with a countdown of only a few minutes.

To abort the launch type in SHSR.

Walk up the stairs to the east and “open box” next to the receptacle on the glass wall. “Wear mask” and continue walking along the glass tube.

Once back in the main hallways head west until you come to the escape pods. A robot will attack you if you try to enter the pods so make a run for it. Run all the way around and approach from the other side. “Push button” and “get in pod”.

“Press launch button” to escape from the asteroid. It’s not over yet as the oxygen in the escape pod is running low. Head over to the sleep chamber and “open chamber”. Not knowing where you’ll end up “get in chamber” and hope for the best until Space Quest 3!

Space Quest 2 was released in 1987 and loved by fans and critics alike. The graphics are similar to the first Space Quest game but the second installment features more animations and more complicated puzzles to solve.

Like the first Space Quest it used Sierra’s own game engine, the Adventure Game Interpreter, or AGI. SQ2 was designed by Mark Crowe and Scott Murphy and is a light-hearted adventure to offset the more serious King’s Quest series.

A remake of Space Quest 2 was released by Infamous Adventures in 2011.