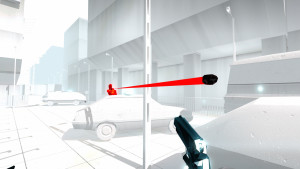 SUPERHOT is a new game by the SUPERHOT Team that involves a really nifty new mechanic that freezes time whenever you stop. SUPERHOT is a first person shooter that allows you to perform Matrix-like manoeuvres in the blink of an eye.

Ordinary first-person shooters are fast and action packed. SUPERHOT is a little different in that you’ll have a number of scenarios to get through. They’re fairly short but you’ll have to think about each action you take.

You’ll have time to stop and look around as time slows down to a crawl when you stand still. You can even see bullets slowly gliding past you in this state. Once you move however, bullets will start flying at normal speed so be careful!

The new time mechanic is a lot of fun to play around with and the developers have come up with some really cool situations to enhance this effect. 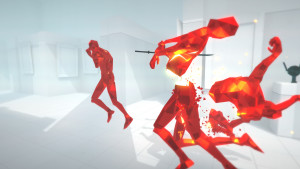 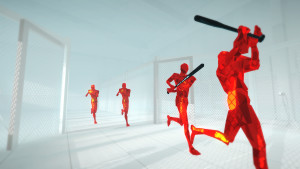 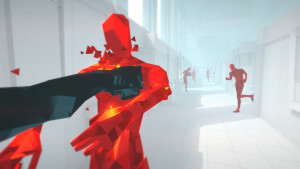 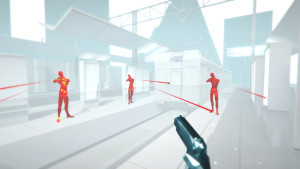 Each scene can get pretty intense as you’ll need to make each movement count. There are a number of different items and weapons that you can use. If you’re good enough you can even slice bullets out of the air with a katana.

SUPERHOT features 32 levels that you’ll be able to complete in around 3 to 4 hours. The story line is intense, but a little cheesy. The graphics are clean and white, allowing you to focus on the glowing red men that will appear from various entry points or just spawn in.

Once you’ve finished the story mode you’ll unlock new Challenges and the Endless mode that spawns the red men in an endless stream.

SUPERHOT is a great concept and I really liked the clean graphics and time-stopping action. It could have used a little more variety towards the latter part of the game but overall it was fun to play and I really enjoyed the challenge of trying to beat each scenario.

Unfortunately it is a little pricey at the moment. With purchase price around the $25 mark. I think $15 would have been fairer value for a game such as this but nonetheless highly enjoyable and worth playing.