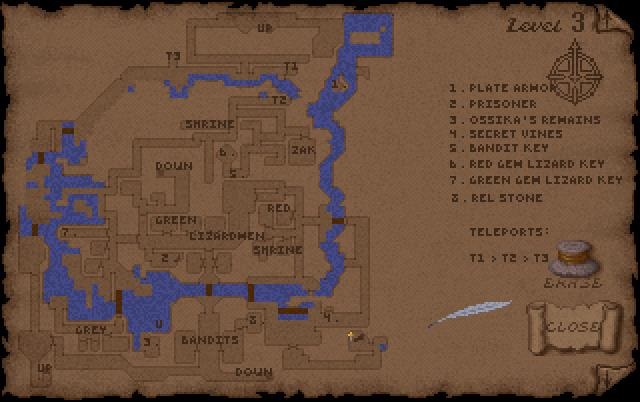 Level 3 of of the Abyss is inhabited by green and red lizardmen as well as a few bandits. You’ll also find the blade of the Sword of Caliburn on this level. You can either enter this level from the south west or the north. Either way you’ll want to find the Red Lizardmen Key and the Green Lizardmen Key to open most of the doors on this level.

At point 2 on the map is a prisoner who speaks lizardman but unfortunately he’s mute. His name is Murgo. Speak with Sseetharee, the lizardman guarding Murgo a few times and then go back to Murgo to translate these new words. Continue until you have translated all the words you need to be able to speak to the lizardmen. Now talk to Sseetharee about releasing Murgo.

Blade for the Sword of Caliburn

The Sword of Caliburn has been broken in two and the blade lies somewhere on this level. Visit Ossika’s remains at point 3 on the map. There’s a clue here to ask “Shanklick about crazy wizard.” which you might want to remember for later in the game. Pick up the scroll and take it to Ishtass in the Grey Lizardmen area. He will give you a few items as a reward including a Wis Stone.

The clue was that there was a secret wall in the south-east area of the map. Go to point 4 and look behind the vines to see a secret door open the door and flip the switch inside. This will drain one of the ponds just to the west of you. Drop down into the dry pond and enter the door to the south. Walk  up the ramp, kill the ghost that attacks and find the blade of the Sword of Caliburn as well as another Shrine and a Healing Fountain.

Iss’leek is found in the Red Lizardmen area. He will hand you a scroll asking for a red ruby in exchange for a lizardmen spell. Give him a red ruby and he will give you the Water Walking spell ‘Ylem Por‘.

Before you leave the level make sure you speak with Zak. He seems a bit crazy but does have an important item that we’ll find out about later. For now just have a chat with him and head down to level 4 where you’ll speak with a knight called Trisch who’ll tell you that Zak has stolen the Taper of Sacrifice. You can trade Zak for the talisman. Just give him a few torches or some food and he’ll give you the Taper.

Next Part: Level 4 (Knights and Trolls)