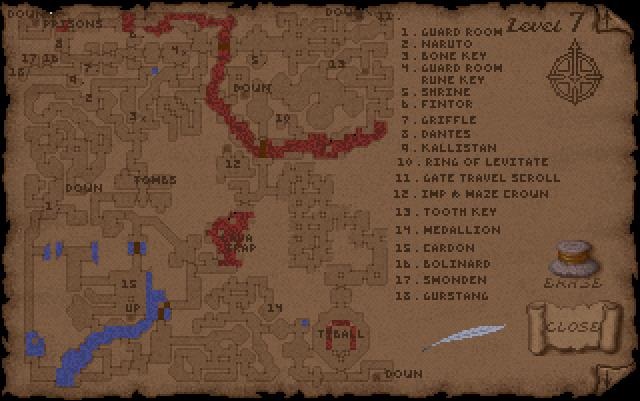 This is the level of the Prisons and you’ll have a difficult time navigating around this map. Not only are there many monsters including Trolls, Fire Elementals and even a Shadow Beast but all the Mana has been drained from the level by the evil wizard Tyball. Level 7 is also connected to Level 8 so in a sense you’ll need to complete them together.

When you enter the level for the first time you’ll meet Cardon. A knight whose desperate for some port if you have any on you. He’ll also tell you about a medallion he lost in the mines to the south. If you have it you’ll be able to get past the guard posts without being attacked. It’s not essential as you should be skilled enough by now to handle all of the troll and goblin guards.

Head to the prison area in the north. You’ll need to get past the guard room at point 1 and then through the trapped spider area. You’ll meet Naruto on the other side of the spider traps. He’ll tell you about a key (the Bone Key at point 3) that you need to enter a secret area to get the crown that will see you safely past Tyball’s maze.

Griffle is desperately hungry so give him some food if you have food to spare. Griffle will tell you about a mineral called Orb Rock which can be found on the level below. Dantes will show you an escape route from the prison that he can’t take because of his bad leg. Kallistan will trust you if you tell him the secret password you learned from Goldthirst on Level 2, Deco Morono. He’ll give you a magic splinter which will open a secret passage to the tombs on the southern edge of the spider trap area.

Take Dante’s escape route and drop down to the lava canyon. You’ll find a map here giving you a clue how to get past the Lava Trap room. There are many fire elementals up ahead so you’ll need to be careful. On the eastern side of the lava chasm is a door that can only be opened with the Bone Key (3). Take the stairs leading down to Level 8 and then back up to Level 7 where you’ll encounter an Imp (12). The Imp will give you clues as to which crown is the right one. It’s the one with the single small gem in the center. This is the Crown of Maze Navigation.

Follow Dante’s escape route to the north-eastern corner of the map. You’ll pass a shrine (5) along the way. Take the stairs down to Level 8. Pick up some Orb Rock which you’ll need to destroy Tyball’s Orb and then take another set of stairs up in the southern part of this region back up to Level 7. From here you can pick up the Tooth Key (13) which opens the door at the other end of the Lava Trap room.

Now head around and approach the Lava Trap room from the southern entrance using the Tooth Key. You can use the map you found to find out which pillars are trapped or just use your Dragon Scale boots to walk across the lava and levitate up at the other side.

Use your Tooth Key again to open the door on the other side. Wear the Crown of Maze Navigation which will show you the path you need to take through the maze. Follow it around until you come to Tyball’s room.

To defeat Tyball and restore mana to this level run to the center of the room and use the Orb Rock on the Orb in the center to destroy it. Now attack Tyball and when he’s been defeated he’ll drop two keys, the Prison Key and the Imp Key. Use the Imp Key to open the cell and free the Princess Ariel.

It’s not over yet! You still need to escape the Abyss. Now that you have the Prison Key go back to the prison cells in the north west and open the three remaining cells.

Bolinard will offer to draw you a map. Take it as it has a Picture of Tom, Judy’s old lover. Return to Level 5 and give the Picture of Tom to Judy. She will shed a tear into the lava and create the Key of Love.

Smonden will give you a Key and tell you about the Key of Courage that you can get to by taking the staircase in the very north west area of the map. Take Dante’s escape route and jump over the lave to the door on the other side. Follow the series of staircase up all the way to Level 3. There are two towers here. To get into the west tower you ‘ll need to smash the door open. Inside you’ll find a Key to open the eastern tower. Inside the eastern tower you’ll find the Key of Courage.

Gurstang is Illomo’s friend from Level 6. He asks you to visit him and tells you the secret password which is Folanae. Talk to Illomo and tell him the secret. He’ll mention a book in the library. Go to the library and find the book that mentions Folanae Fanlo. This is the secret mantra to reveal the Key of Truth. Go to a shrine and chant Fanlo to find it.

Next Part: Level 8 (Chamber of Virtue)