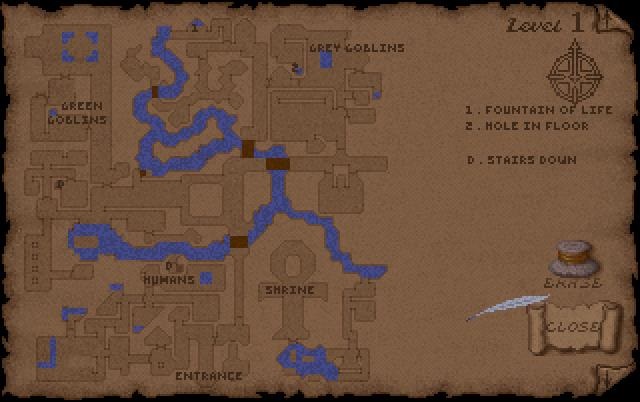 From the entrance you’ll be able to see a sack with your basic items inside including a badly worn dagger, torch, some food and the auto map. The auto map will update itself as you explore the Abyss.

You begin in the south and won’t be able to explore further north until you find they key. Fairly close to the entrance you’ll find a Rune Bag with some rune stones in it. There are a couple of runes lying on the floor that you’ll want to grab as well. You’ll also find the Red Key which will open a number of locked doors on this level.

The first place you’ll want to visit is the Human Encampment. To the west of the entrance you’ll meet Bragit who will give you directions to find the other humans. In his room you’ll find a bed roll. Take it so that you can rest when you need to.

In order to get to the Human Encampment you’ll need to make a small jump facing north across a gap to the corridor on the other side. The picture below shows the location of the jump. 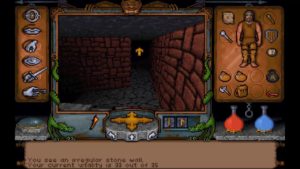 Once there speak to Hagbard who is the leader of the outcasts and learn as much as you can about the Abyss and its inhabitants.

Now that you have the Red Key you’ll be able to get through to the northern areas. The Green Goblins have a camp to the northwest. There are two green goblins you should speak with, Lanugo and Vernix, the green goblin king.

Lanugo will give you a recipe for rotworm stew. It’s very important that you get this recipe as you’ll need further down in the Abyss. Vernix has lots of information but you’ll need to give him lots of praise if you want to continue the conversation. He’ll also give you hints about the 8 talismans.

Hidden behind a secret door to the very north is the Fountain of Life where you can go to restore your health. Just south of it are the caves which have been overrun with spiders. Kill the wolf spider, Navrey Night Eyes and take her strong thread in the caves. You’ll need this later on in the game.

The grey goblins can be found to the northwest part of the map. Speak with Retichall and get permission to speak to the grey goblin king, Ketchaval. From what I remember neither of them have all that much to say.

Jaacar, in the northern part of the grey goblin area, will tell you about the toilet that drops down to a lower level. You can use this as an alternative path to the second level.

You’ll find the lever puzzle just to the south of the grey goblins. The levers represent the height of the pillars in the large rectangular room. From left to right move the levers to the top or 0 position, 1, 2, 3 and 4. You can now jump across them and into the room with Korianus’ Grave. He was the master builder of the Abyss.

To the south of the lever puzzle are two doors that can only be opened with the Stone Key. They both lead to the same room with a skeleton inside. Once you’ve defeated the skeleton you’ll be able to pick up the serviceable chain cowl.

Drop down into the river and swim to the south west. You’ll be able to get out on dry land here. in the first room on the left is an Orb. Look into it to see a green path that leads out of the Abyss. You’ll need to remember this for the end of the game.

Follow the path along and jump across the two platforms to enter the shrine. A few mantras are scribbled on the walls. Right click on the shrine and recite the mantras to level up in various skills.

There are three ways to get down to Level 2, two sets of stairs and a lavatory. Have a look at the map above to see the stairs, marked with a D, and the lavatory (hole in the floor) marked with a 2.