One of Olgierds “three difficult tasks” is to show his brother, Vlodimir, the time of his life. The only thing is his brother is dead. You will need some help from Shani for this quest so follow the map marker to go and see her.

Shani agrees to help and will meet you at the Von Everec Family Crypt with a censer. When you arrive she’ll invite you to a wedding party later. Enter into the crypt and Shani will decide to wait outside. 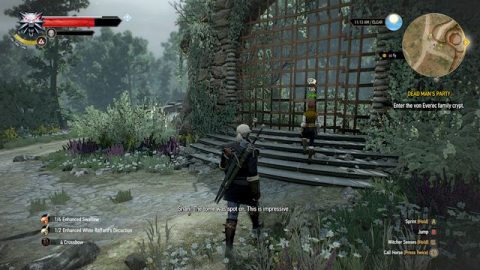 Once you enter the crypt you’ll be locked in this area until you complete the ritual. Kill the wraiths and then destroy the breakable wall with Aard. head through the tunnel and take out the Arachnomorphs, very fast spider-like creatures.

Search the nearby body for a Crypt Key and then use it to unlock one of the rooms. Use your Witcher senses to inspect the coffins until you find the one that belongs to Vlodimir.

Use the censer on all the locations marked on your map and then light the central votive with Igni. At this point the Von Everec family will awaken and attack. Once you’ve killed them off Vlodimir will appear.

After having a chat with him you’ll decide to let him possess Geralt for an evening. Go back out to see Shani and she’ll propose that you take Vlodimir along to the wedding party and Geralt reluctantly agrees.

Vlodimir, now in Geralt’s body, will have a haircut and a shave and then find some clothes for the party. Meet the newlyweds and then start taking part in the wedding activites. There are 4 main activities that you need to participate in to progress the story and a number of optional activities.

The main activites are Pig Chasing, Gwent, Fire Swallowing and Shoe Fishing. The optional activites include talking to the girls, having drinks, talking to Shani in the barn and having a dance.

Pig Chasing – Chase 2 pigs into the pen. You can use Axii but you won’t win because the spectators will realise you cheated. Once you’ve completed the task Shani will challenge Vlodimir to win over a girl. The girl’s brothers won’t be happy about it and it will end in a fist fight.

Gwent – Walk around the grounds until you find the Halflings sitting around a table playing Gwent. Walk up to them and ask to join in. If you lose the game you’ll have to wear Ass Ears for the rest of the party. After the game you’ll have a dance with Shani. Gaunter O’Dimm will appear and dedicate a song to you.

Fire Swallowing – Talk to the two people discussing the fire swallower who was chased away. Agree to find the Fire Swallower. You still have access to your Witcher senses so follow the tracks until you find him hiding up a tree with a dog down below. Use Axii on the dog and he’ll come down. You can either pay him 50 Crowns or cast Axii to convince him to come back to the party. Escort him back and you’ll have to fight off a Boar along the way. If you let the Fire Swallower leave Geralt will put on a juggling act instead.

Shoe Fishing – Speak to the people around the pool to learn the rules of the game. Shani will throw in a shoe and you’ll have to find it. An easy task for a Witcher. Dive in a pick up the shoe. There are other shoes down here as well and you can pick them all up if you want for a slightly different dialogue with Shani.

Once all the main activities have been completed you can head back to the barn for a speech and then Vlodimir will write a letter in blood for his brother. Vlodimir decides he doesn’t want to leave but Gaunter will show up and banish him. Return to Olgierd to complete the quest.