Scenes from a Marriage

The third and final task is to bring Olgierd the Violet Rose that he gave to his wife, Iris, the last time he saw her.

The logical place to investigate is the von Everec Estate. Make your way there and you’ll run into a scared thief. He tells you his partner went missing while exploring the manor. Upon seeing a figure in the distance he runs off.

The estate has been abandoned for years but it appears someone has been keeping the garden in order. When you reach the front door you’ll find a smashed lamp that belonged to the second thief and drag marks leading to the rear of the estate. Follow the marks around to the back and you’ll find the body and the murderer.

The Caretaker is an eyeless monster and one of the more difficult boss battles up until this point. It’s susceptible to Relict Oil and Quen but will summon spirits that he feeds on to replenish his health. 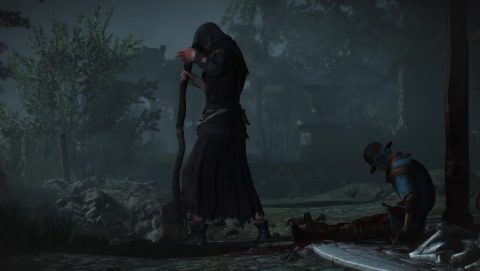 The Caretaker moves slowly but has a wide area of effect. Try to learn his pattern while always rolling out of the way. He’ll heal up a great deal when he damages you so keep Quen activated.

When he charges and smashes the ground he’ll get stuck for a few seconds. Use this opportunity to hit him in the back a few times. The Doppler Decoction can help with this as it increases damage from critical hits from behind by 50%.

When the Caretaker summons Spirits to feed from make sure you kill them as fast as possible. You could try to freeze him for a few seconds with Northern Wind to prevent him from healing as much as possible.

Once you’ve defeated the Caretaker you’ll meet the mysterious Cat and Dog. They’ll tell you that you can find Iris inside the house in her bed chamber.

Before heading into the house search around the garden. In the southeast corner you’ll find the remains of a gazebo. Use your Witcher senses to find an Ornamented Brush. This is one of three items that you can place on Iris’ grave later.

When you enter the house search around the rooms to find Iris’ Sketchbook on one of the tables. This is the room where Geralt will notice a wraith appear in one of the paintings.

Make your way upstairs, out to a walkway and back into a small bedroom. Go out into the hallway where you’ll be attacked by a Wraith.

The Wraith is susceptible to Specter Oil and the Yrden sign. When she needs to heal up she’ll attempt to enter into one of the paintings. When you see this happening rush towards the painting and cast Aard on it or attack it. 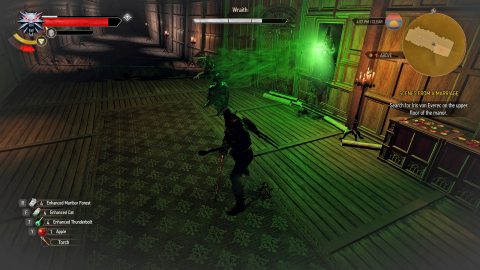 As long as you can stop her regenerating this fight shouldn’t be too difficult. When you’ve finished with the fight enter the bedchamber and look at Iris’ body on the bed.

The Cat and Dog will tell you that you need to lay her bones to rest. Pick up the Portrait of Iris and Olgierd from the end table and then head outside to find a nice spot for her grave. Once you bury Iris her spirit will create a magical painting of the manor and enter inside. You’ll follow her also.

While you’re in this painted world you’ll need to reconstruct the painted scenes so that Iris can recognize the memories that she’s been denying. There are a total of eight memories and all of them have some elements missing. You’ll need to put the right items in the right locations to complete the scene. Once that’s done you can move on to the next one.

The painted scenes can be found in this order, the courtyard gazebo, the fountain, the dinner table, the bedroom, the painting studio, Olgierd’s study, the estate’s cellar and the dinning room.

As you complete the memorie’s you’ll get a better picture of what happened to Olgierd and Iris and how Olgierd tried to summon Gaunter O’Dimm.

During the final memory Olgierd will appear as Iris’ Greatest Fear. You’ll need to defeat him to progress with the story.

There are 6 nightmare forms of Olgierd but only one will wake up at a time unless you strike one of the other ones. the nightmare Olgierds get more and more difficult to defeat with the first few being quite easy. 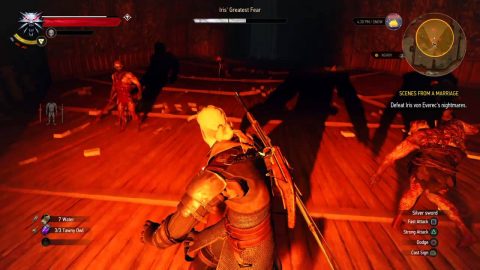 Try to only activate one Olgierd at a time. Once you reach the final two or three you’ll need to continually dodge out of his devastating attacks. Keep Quen active and side-step his attacks. Follow up with a strike to the side. You can parry Olgierd’s regular attacks if you feel confident with your timing.

Once you’ve defeated Olgierd’s nightmare you’ll finally meet Iris. You can choose to break her connection with this world and ask her for the rose or let her keep it.

If you let her keep the rose the Cat and Dog will be stuck in this world to look after her. They hope someone will come along one day to free them. You’ll be able to give Olgierd the portrait of the violet rose as completion of your task.

If you ask for the rose Iris will give it to you willingly. The Cat and Dog will be freed from their service to Iris and will warn you that you should be wary of Gaunter O’Dimm. They tell you that you should “seek salvation in the glass that can’t be broken”. When Iris gives you the Violet Rose the painted world will crumble. Quickly leave the world to complete the quest.