Once upstairs you’ll have the chance to meet some of the other buyers, the Art Dealer, the Countess and the Gwent Player.

The Art Dealer will assume you know nothing about art but if you claim to know something he’ll ask you to point out the correct painting. The answer is the Portrait of a Merchant. If you get the painting correct he’ll tell you about a piece that’s for sale today by van Rogh. He tells you that you can make a profit if you buy it and sell it to an admirer and collector in Novigrad. If you tell Vivaldi about it he’ll try to outbid you during the auction. 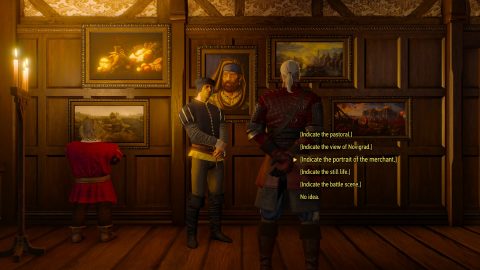 The Countess is an aging widow and a collector of rare Witcher gear. During the conversation the Merchant icon will appear and you’ll be able to buy the Viper School Gear. If you want to talk to her some more you can offer to help her find her earing on the balcony.

The Gwent Player Hilbert is using a Monster deck unless you tell him you also have a Monster deck. In that case he’ll switch to Nilfgaardian. Vime will try to cut in and take a portion of the winnings. You can refuse and he won’t be offended. If you win the game of Gwent you’ll get the Gaunter O’Dimm Gwent Card as a reward.

During the auction you’ll have the chance to purchase 3 pieces, a painting by van Rogh called Starry Night Over the Pontar, a rare statuette of an eagle and a pair of spectacles belonging to The Professor in The Witcher.

Once the first phase of the bidding has finished Vivaldi will introduce you to the host, Horst Borsodi. Unfortunately no matter what you say you’ll be kicked out of the auction and have to defeat the two guards outside. You’ll be met by a Stranger who tells you to meet him at the Herbalist’s Hut out of town.

Make your way to the hut and defeat the 3 Fallen Knights banging on the door outside. The Fallen Knights are a sect of the Order of the Flaming Rose who have given up protecting the realm and instead spend their time producing fisstech.

Knock on the door of the hut and give the password. Take the ladder down to the secret room under the hut to begin the meeting with the Stranger. To get your hands on Borsodi’s House you’ll need a little help. This will open up three subquests.

There are quite a number of guards protecting the estate but if you could convince the cook to add a little something to the stew then some of them might be incapacitated.

Craft a Cleansing Mixture by combining Dwarven Spirit, Rotfiend Blood and 2 x Wolfsbane. Make your way to the Auction House and carefully listen to the conversation the guards are having out the front. They don’t seem to say anything interesting so sneak around the back and listen to the guards through the window. This also proves fruitless so jump over the fence and follow the road behind the auction house. You’ll find two guards having a conversation. Listen in on them from a distance to find out where the cook is located.

Make your way to the docks by the Western Gate and speak to the cook, Maarten. You can only find him here during the day. Speak to him and either offer him 500 Crowns or Use Axii to get him to spike the stew with your mixture.

You have two people that you can recruit as the safecracker for this job. The first is Casimir Bassi, an explosives expert, and the second is Quinto, a master lockpicker.

Casimir – When you arrive on the scene Casimir is threatening to blow himself up because his wife cheated on him. You have four dialogue options to choos from. The first two will cause him to blow himself up, the third will start a fight and you can use Aard to blow out his torch and the fourth is to convince him with the Axii sign. As long as you keep him alive he’ll offer his services for the job. 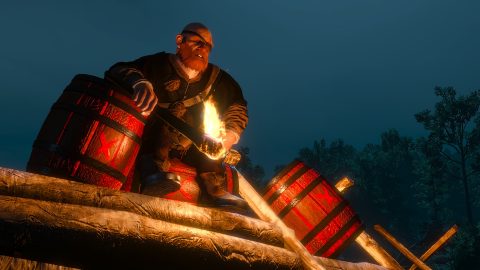 Quinto – Quinto is not far from the Herbalist’s Hut but he’s being held by Hans of Cidaris. You can pay 200 Crowns to free him or challenge him to a fistfight or round of Gwent. If you lose the fistfight or Gwent you’ll have to pay double. Regardless of how you freed him he’ll offer his services if you choose to accept him.

While it appears there are two choices for this job, Eveline and Hugo, only Eveline will be available. If you try to hunt down Hugo you’ll find his place empty and footprints leading down to the river. Follow the footprints to three thugs. Kill them and search the river for Hugo’s body.

Eveline is a circus performer and is camped with her troupe to the west of the Vegelbud Residence. When you arrive they’re in a bit of bother as one of the performers can’t perform but they also can’t give the audience a refund as they’ve spent the money. 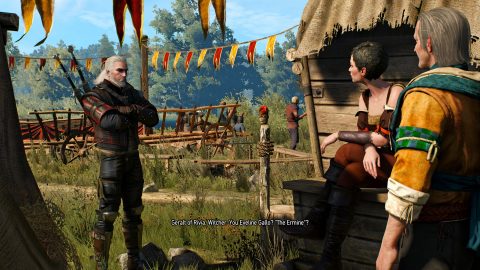 With the smaller quests completed you can now continue with the heist. Meet the others at the designated location and wait for Eveline to scale the tower.

When you enter you realize the tower isn’t empty after all. Geralt refuses to kill anyone for this heist so use your wooden sword to knock them out.

Make your way downstairs and you’ll run into Horst Borsodi with some customers. During the fight with the guards someone will ring the bell and guards will gather outside the auction house. Horst Borsodi will lock himself in his vault.

At this point the Stranger will grab a hostage and you’ll be left to negotiate. Depending on who you have on your team this scene will play out a little differently.

If you recruited Quinto you’ll need to buy some time by negotiating with the guards so he can pick the lock on the vault. If you fail to negotiate you’ll have to fight off some of the guards.

If you recruited Casimir Bassi you’ll still have to negotiate but the guards will burst in when they hear the explosion. No matter how good your negotiating skills you’ll have to fight them.

Eveline will decide that things are getting a little too hot for her and she’ll climb up through the chimney to escape.

Head down the stairs towards the vault. If you hired Quinto he’ll fail to notice a trapdoor on the floor and fal down to a lower chamber where you have to fight Arachnomorphs. Once you’ve killed them your team will help you back out. If you hired Casimir his explosion will disable the trapdoor trigger.

Open the door to the vault and the Stranger will reveal that he’s actually Borsodi’s brother, Ewald Borsodi, out for revenge. Horst will try to bribe you to switch sides. You can either agree to his terms, stay with Ewald or try to remain neutral. Trying to stay neutral won’t work as it’s too late to stay out of it.

At the end of the fight you’ll find out that Maximilian Borsodi’s House contains the will of their father and to give it up would mean the Borsodis lose their fortune. You can agree to take the house but not the contents within it. If you try to take all of the documents inside the house as well you’ll need to fight whoever’s left from the previous battle.

Head outside and explain what happend to Olgierd to complete the quest.