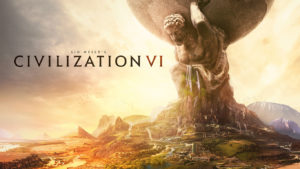 The much anticipated Civilization 6 is set to be released on October 21st 2016. Firaxis has hinted at a much updated researching system and new city dynamics. Civ 6 reintroduces unit stacking to a limited extent and cities now need space to develop new districts which may limit population growth.

One of the first things you’ll notice about Civ 6 is the updated graphics. Developers at Firaxis noticed that many Civ players liked to play the game while zoomed out. Having a large view of the world is important for Civ players so that they can get an understanding of where their units are located around the world so they can prepare a strategy. For this reason Firaxis have made text easier to read and units easier to distinguish from a distance.

This focus on gameplay from a distance doesn’t mean that close-ups have been forgotten. In fact units will be able to be seen in far more detail. Warriors will look beafier and archers will be lithe and heroic. Each of the units will have a unique look depending on which culture the unit comes from. Each civilization will still have their own unique units and buildings. 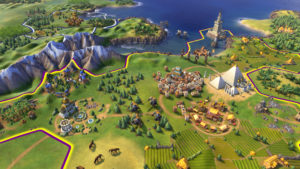 With Civ 5 there are certain tactics and policy trees that tend to work better than others no matter what situation you’re in. Firaxis want to change all of that and make sure players have to think on their feet a lot more in Civilization VI.

For starters you’ll have to adapt a lot more depending on what the map presents to you. Your starting position will make certain strategies more appealing and worthwhile and the other civilizations around you will also have a bigger bearing on your own strategy. 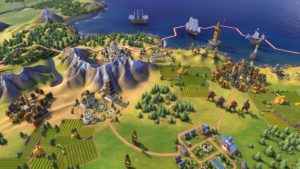 In past Civ games cities where crammed into a single tile no matter how big they grew or how many wonders you built on them. In Civ 6 cities will be made up of districts and each district will require an individual tile. This will put limits on city growth and determine what buildings can be built.

Certain buildings can only be built within certain districts. For example a “campus” tile is where research buildings can be built and other building will need to be placed within their respective tile. There are 12 tiles in total, giving the player lots of options for city layout.

Different map tiles give different bonuses to city districts. Faith is back and it’s great to place your faith buildings on mountain tiles but they also give a boost to science research as you stdy the skies.

Unit stacking is not back per se but you will be able to tie units together to reinforce them and protect them. It’s a little silly having to send out settlers by themselves. Now you’ll be able to camp them within a military unit, making them a little less vulnerable. 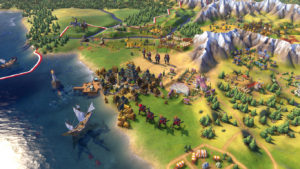 Supporting units no longer need to have their own tiles. Units such as anti-tank guns and battering rams can now be embedded in other military units.

Research is no longer passively related to your science output. What you do with your civilization determines your boosts to research. For example if you want to streamline towards developing a navy than building a city next to a coast will help with that research. Likewise doing things like building quarries will give you a research boost to your construction research.Starting location will also affect research boosts and will help push your civilization in one direction or another.

Each civilization leader will have traits that are historically accurate but also random traits that are assigned at the beginning of each game. You’ll be able to find out what these traits are by spying on them or observing their play style. A leader may be passionate about one thing or another. If a leader is big on building wonders and you build too many wonders in your own city than it could be a catalyst for war. If they are your direct neighbours than you may need to alter your strategy.

Firaxis are incorporating smaller campaigns for multiplayer and solo games with specific victory conditions. The goal is to have a multiplayer game take up to two hours rather than all day. One scenario may be based in a certain period, such as the Renaissance era with the goal of developing the greatest faith. They’ll be coming up with many such scenarios for multiplayer games.

Stay tuned for more Civilization 6 news and reviews closer to the release date.