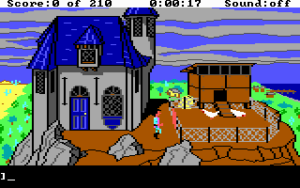 King’s Quest 3: To Heir is Human is the third adventure game in the highly popular King’s Quest series. This time you play the role of Gwydion, a poor boy whose been captured by the evil wizard Manannan. Gwydion is the son of King Graham and was kidnapped at a young and taken from his home in Daventry.

King’s Quest 3 takes place in the land of Llewdor where Gwydion lives on top of a mountain. To the east lay the endless ocean and to the west the barren desert. Gwydion must search the lands around the mountain in order to find spell ingredients that will help him escape from  the evil Manannan who forces him to do chores around the house.

King’s Quest 3 when it was released was regarded as the most difficult King’s Quest game. If you get stuck in any part of the adventure feel free to browse the complete walkthrough and list of spells below.

You begin the game in the Manannan’s house on top of the mountain. Manannan will leave or go to sleep after about five minutes and will return after another 25 minutes. When he returns you must be in the house and not have any magic items on you, marked with a *, in your inventory. Manannan may give you various chores to perform when he’s at home such as feeding the chickens or cleaning the kitchen. Some of the spells in the manual are incorrect. Have a look at the KQ3 Spell List for the correct spell instructions.

South, west, up the stairs and wait outside Manannan’s bedroom until he appears and tells you he’s going on a journey.

South out of the bedroom and then up the stairs. Look through telescope. Take fly and go down the stairs and once again to the entrance. Go north into the study.

Move to the bookshelf to the right and move book, pull lever and walk down the stairs to the laboratory below. Look at the shelf and take mandrake root powder, take nightshade juice, take powdered fish bone, take saffron, take toad spittle, take toadstool powder.

Walk back up the stairs to the laboratory and pull lever, move book.

Go south and south out the front door. Open gate and get chicken. Get chicken feather and open gate to walk out.

Walk down the mountain path to the bottom. Go west twice and turn to face the way you came. When Medusa gets close to you show mirror to medusa.

Walk east once. Wait around here for an eagle to appear. When it flies overhead it will drop a feather. Take feather.

Walk to the east and stand near to the river. Take mud.

Walk to the east twice. Stand in the ocean and take water.

Climb up the ladder to the pier. Walk west and then south. Take mistletoe from the tree.

Go west to the Bear’s house. Open door and take porridge from the table. Go up the stairs. Open drawer and take thimble.

Exit the Bear’s house and look flowers then get dew.

Go west and north to the tree with acorns around it. Take acorns. You may need to try a few times to find dry ones. Look at hole in the tree then grab hole. A ladder will drop down.

Climb up the ladder and go into the tree house. The box in the corner is where your things will be kept if you get mugged by the robbers. Otherwise take purse from the table. Look purse.

Look map and teleport back to the village.

Look map to teleport back to the base of the mountain and then climb back up to the house. Go to your room and put all under bed before Manannan gets back.

Wait for Manannan to return. He’ll be hungry when he gets back so take fruit from under your bed and go down to the dining room table. Give fruit to Manannan.

After a little while Manannan will get tired and tell you he’s going to sleep. Walk into his room, the only place where you can pick up the cat and get cat. Take cat hair and then go back to your room. Take all.

Understanding the Language of Creatures

I. Put the small feather in a bowl

II. Put the fur in the bowl

III. Put the reptile skin in a bowl

V. Put a thimbleful of dew in the bowl

Feather of fowl and bone of fish

Molded together in this dish

Give me wisdom to understand

Creatures of air sea and land

I. Put a pinch of saffron in essence

To grant the precious gift of flight

Transforming another into a Cat

I. Put the mandrake root powder in a bowl

II. Put the cat hair in the bowl

III. Put two spoons of fish oil in the bowl

V. Put the dough on the table

Mandrake root and hair of cat

Mix oil of fish and give a pat

A feline from the one who eats

There’s one more ingredient we need so go back to the study. Pull lever, move book and open cabinet to put the magic wand back. Look at map and teleport to the spider’s cave. Dip eagle feather in essence and fly into the cave. You’ll take the spider out to sea and drop it in the ocean. Enter the cave. Listen to the oracle and you’ll be given the amber stone.

If you have some time now that you can understand the language of animals you can walk around and wait a while for the animals to say something. Otherwise climb back up the mountain to Manannan’s house.

Walk up the stairs to your bedroom and put all under bed. Take porridge and take cookie.

Wait for Manannan to wake up. He’ll be hungry again so go down to the dining room table and give porridge to Manannan. Now that he’s a cat you won’t have to worry about him anymore!

Go back to your room and take all. Go to the study, open cabinet, move book and pull lever for the last time. Go down the stairs to the laboratory and cast the remaining spells.

I. Grind a spoon of salt in a mortar

II. Grind the mistletoe in the mortar

III. Rub the stone in the mixture

With this kiss I thee impart

Power most dear to my heart

Take me now from this place hither

To another place far thither

I. Grind the acorns in a mortar

II. Put the acorn powder in a bowl

III. Put the nightshade juice in the bowl

VI. Heat the mixture on the brazier

VII. Spread the mixture on a table

Silently in darkness you creep

To bring a soporific sleep

X. Put the sleep powder in the pouch

I. Put a cup of ocean water in a bowl

III. Heat the bowl on the brazier

IV. Put a spoon of mud in the bowl

VI. Blow into the hot brew

Elements from the earth and sea

Combine to set the heavens free

When I stir this magic brew

Great god Thor I call on you

IX. Pour the storm brew into the jar

I. Cut the cactus with a knife

II. Squeeze the cactus juice onto a spoon

III. Put the cactus juice in a bowl

IV. Put the lard in the bowl

VI. Stir the mixture with a spoon

I now start down a dangerous road

Combine with fire and mist to make

Me disappear without a trace

Look at map and teleport to the village. Enter the tavern and talk to captain. He has a ship so maybe you can pay him for passage. Give gold to captain.

Exit the tavern. Walk east twice out the pier and then get on board the ship. Unfortunately these ships are pirates and you’ll be thrown into the cargo hold down below!

Walk to the east once and wait around until the mice begin to speak. They’ll tell you about the hidden treasure which is buried five steps to the east of a lone palm tree. Pick up box. Walk to the west. Drop box just to the right of the big crate under the ladder.

Climb up the ladder to the top. Go east and take shovel. Run away if there are pirates. Go west to the captain’s cabin. If he’s not there go inside and look chart. Open chest and take all. Now that you have all of your items back go back down the ladder and wait in the cargo hold  until land is sighted and then the anchor is dropped. You may need to wait 5 or 10 minutes.

Once anchor has been dropped stand next to the small box and pour sleeping powder on ground. Slumber henceforth to cast the sleeping spell on all members of the ship.

Climb up the ladder to the deck. Get off the ladder and go to the east side of the ship. Walk over the edge and swim to the east to find the island. Watch out for the shark!

Now that you’re on the island walk to the east. A pirate is here. Quickly walk to the north and then south again and the pirate won’t be there.

Dip eagle feather in essence. Fly north, east and east. A yeti will chase you but become scared when you transform back into a human. Head south and start climbing down the rock face.

Welcome back to the land of Daventry!

Enter the cave to the right and follow the stairs to the top. Before going to the west rub ointment on me to turn yourself invisible.

Go to the west to see the dragon with the Princess Rosella. Stir storm brew with finger and say brew of storms churn it up!

Talk Rosella and then untie Rosella. Enter the cave to the east and go down the stairs. Go east and then north and north again to win the game.