You’ll be controlling Berta for a little while in this part. Open the closet and then take the corn. Click on the pot to pick it up and then place it on the floor. Place the corn on the hot plate to make popcorn. You’ll switch control to Josev.

Pick up the wooden cane and place it through the window to Berta. Switch to Berta.

Use the rubber hose on the bottom of the oil pipe on the left wall. She’ll hand the other end of the hose to Josev. Switch to Josev. 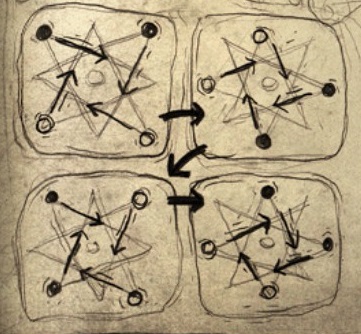 Once that’s done a level will flip out. Pull the lever upwards to take the lift up to the top. Click on the fan robot to speak with him. He’ll ask you a number of questions. Don’t worry about trying to get them right as you want to answer each question wrong. When you do he’ll get angrier and angrier until the engine of the fan flies away.

Climb into the fan and this will take you to the greenhouse.Take the stick on the first pot plant and then walk to the left side of the ray machine. Push the machine twice to the right until it’s pointing at the pot where you took the stick from.

To solve the puzzle for each light click on a square and then follow the arrows until the entire board is lit up. The difficulty is knowing where to start. Here’s the solution for each light. 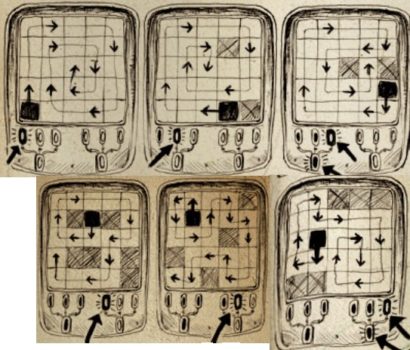 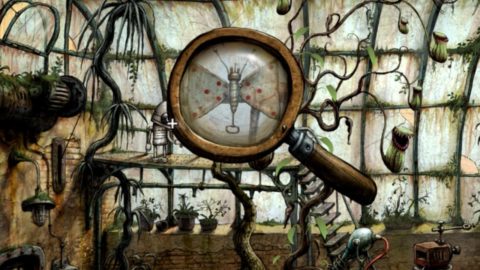 If you want to use the projector pick up the two drawers from the desk and extend your neck use the magnifying glass on the holder in front of the projector. Insert one of the drawers in the back of the projector and press the lower button on the right on the control panel.

Look at the panel next to the door on the left and click on the lights in the same pattern you saw on the butterfly. Walk through, extend your neck and place the sunflower seeds in the yellow machine.

Walk down the steps and place the can on the drain under the pipe coming from the yellow machine. Walk back up the steps and lift the lever up and down to make the sunflower oil.

Go back down the steps and pick up the can of sunflower oil. Talk to the large guard to find out he wants a large battery for his toy robot. Slide down the rail and walk up the steps back to the town square.

Give the can of sunflower oil to the old man. He’ll drop a bandage and give you an arcade ticket. Pick up the strap of bandage and then walk up the stairs to the top left.

Use the arcade ticket on the slot next to the door on the left and enter the arcade. None of the machines are powered. You’ll need to hop on the bike and pedal until the first one is powered up.

Look at the first machine and play space invaders until you’ve made 1,000 points. Pick up the token that comes out the left side of the machine.

Use the lever on the pedal machine to switch it to number 2. Pedal until the second arcade game is powered up and go and have a look at it. this time you have 5 puzzle games that you need to complete. You need to join the small red shape and place it in the large red shape to open the exit for each level. Here’s the solution for the 5 puzzles. 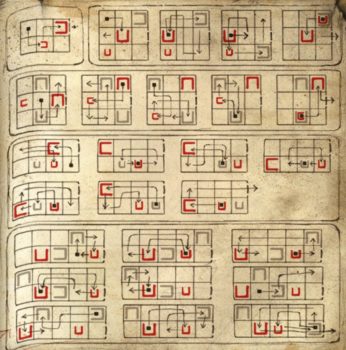 Pick up the second token. The third arcade machine is broken so don’t worry about trying to power it. Leave the arcade and go back to the town square.