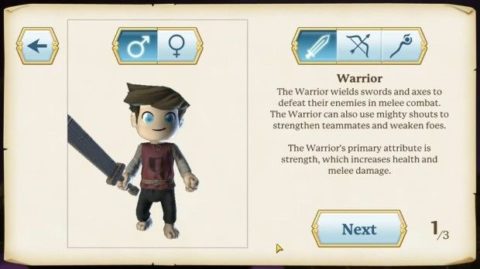 The Warrior Class are experts in direct melee combat and can deal high levels of damage at close range. The weapons of choice for a Warrior are swords, hammers and axes. If you’re playing the Warrior Class you should focus your attribute points on Strength as this will increase your Health Points and Melee Damage.

Talents may be selected once you reach the required level. You can only choose one new talent from each available set. You’re not stuck with your choice for the entire game as you can open your character screen change your selected talents at any time.

Eye for an Eye – Upon receiving damage, there is a 30% chance to increase the damage of your next attack by 30%.
Fortification – After standing still for 5 seconds your Health Regeneration increases drastically.
Commander – You and all players within 5 meters of you deal 15% increased damage.

Adrenaline Rush – Heals you for 5% of your maximum Health Points when you defeat an enemy.
Last Stand – When damage brings you down to low Health, your Armor is increased by 1000 for 10 seconds. May only occur every 90 seconds.

Aggression – Reduces Warrior Shout Cooldowns by 25%. This talent also reduces Crushing Leap’s cooldown by 25%.
Determination – Increases your Armor by 5% for ever enemy in range. 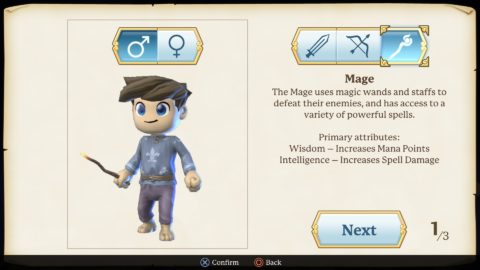 The Mage Class focus on using spells to defeat their enemies. The weapons of choice are Magic Wands, Scythes or Magic Staffs. Intelligence and Wisdom are the main attributes for the Mage. Wisdom will increase your Mana Points and Intelligence increases your Spell Damage.

Once you reach the required level you can choose one new talent. You can go into your character screen at any time and change your selected talents.

Mana Shield – Adds 30% Chance that enemy damage will consume your Mana instead of Health.
Frost Armor – Melee Attackers are slowed by 50% for 3 seconds.

Master of Elements – Increases the bonus damage by 25% when your damage type matches the enemy’s weakness.
Trascendence – When you fall low on Mana you replenish 20% of your maximum Mana immediately. May only occur every 90 seconds.

Spell Rush – Reduces Spell Cooldowns by 25%.
Spell Crush – When you cast a Mage Spell, your next attack is a guaranteed Critical Hit.

Meditation – After standing still for 5 seconds you gain 300% increased Mana Regeneration.
Summoning of the Orbs – Adds a 50% chance to spawn a Mana Orb after defeating an enemy.
Mana Thief – Adds a 10% chance on hit to restore Mana equal to 25% of your damage dealt.

Arcane Concentration – Increases your Spell Damage by 30% if no enemy is within 10 meters. This talent is also applied to normal attacks with staves/wands. If the effect is active, blue light shines at the character’s head.
Illusion – When damage brings you down to low Health, you spawn an illusion which attracts the attacks of nearby enemies. May only occur every 90 seconds.
Blood Magic – Adds 10% Leech chance to heal you for 25% of the damage dealt. 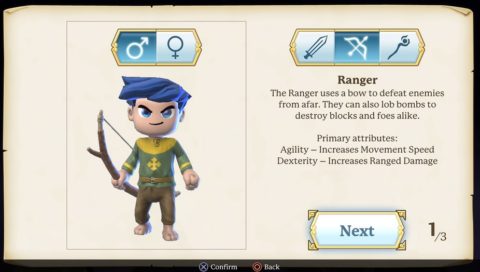 The Ranger Class is great at dealing ranged damage but not so good in melee combat. The main weapons used by this class are Bows and Bombs. Agility and Dexterity are the main attributes for a Ranger. Agility will increase your movement speed and Dexterity increases your ranged damage.

Once you reach the required level you’ll be able to select a new Talent for your Ranger. Talents can be changed at any time but you can only select one from each available set.

Sentry Stance – Increases damage dealt by 25% if you haven’t moved in the last 5 seconds.
Fading – When brought to low Health, your Dodge Chance is increased by 50% for 10 seconds. May only occur every 90 seconds.

Dodge Chance – Adds a 10% Chance that attacks against you miss.
Evasive Maneuver – Upon receiving damage, your Movement Speed is increased by 30% for 2 seconds.

Potion Mastery – Reduces the Cooldown of Potions by 25%.

Orb Thief – Adds 10% chance that your Ranged Damage spawns a Health Orb at your position.
Dodger – After performing an evade roll, your Dodge chance is increased by 20% for 2 seconds.
Unstable – Increases damage dealt with Bombs by 50%.

Sharp Shooter – Increases your damage by 20% if no enemy is within 10 meters. The character’s right eye glows red for 1 second if this talent becomes active.
Cheat Death – Damage that would kill you is prevented. May only occur every 90 seconds. A red skull being cut above the character’s head indicates that this talent has triggered.
In the Face of Evil – Damage increased by 5% for every enemy within 10 meters.

Combo Swing – Adds 10% Multi Strike Chance to deal damage twice.
Exploit Weakness – Increases Ranged Damage by 15% for 3 seconds when dealing a Critical Strike.
Survival Instincts – Upon receiving healing you also heal 10% of your maximum Health Points over the next 3 seconds.

Back to the Portal Knights Walkthrough