Samorost is a small puzzle-adventure game designed by Amanita Design in 2003. It’s a browser based point-and-click game that surrealistic scenes and a small gnome trying to escape the devastation of an approaching meteor.

Samorost can be played through in a bout 10 minutes. If you’re looking for something a little more serious with high definition graphics and beautiful sounds you can try the latest installment of the series, which was released in 2016, Samorost 3 by clicking here.

The game begins with the image of a tree-like world. Click on the observatory at the top of the planet. 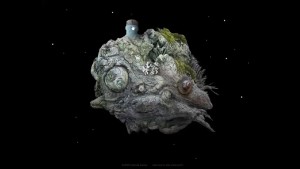 The gnome will see the meteor approaching and take a rocket to go and land on it.

After landing click on the pot of smoke until the man has finished smoking. Click on it again and the man will throw away the pipe, at the end of which is a key. 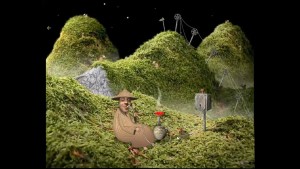 Drag the key to the keyhole on the box to unlock it. The button on the top operates the ski lift. The ropes are not connected to click on the sagging rope to fix it and then press the button. The gnome will rise to the top of the hill.

Click on the little man at the base of the hill to move him out of the way and then click on the gnome to have him ski off the edge of the screen to the left. The gnome will land on a mountainous area. 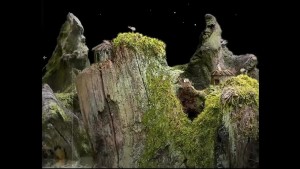 Click at the bottom of the fishing line and a man will pull up a fish. He’ll go inside to cook and eat it. Lizards will start climbing up the cliff face. Click on them to knock them off as they will slow down the eating of the fish.

Once the man has finished eating he will throw the fish bones outside. Click on the fish bones before the bird carries it away. The gnome will then jump on the bird as it flies close and hitch a ride.

The bird will drop you off at the top of a giant cliff. 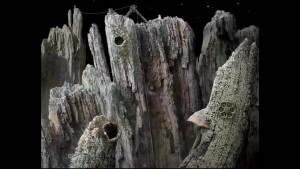 Press the wheel on the side of the giant tree face four times to bring it closer. Then click on the hole opposite the face. A tree-like hose will come out and enter the tree face. The face will sprout flowers.

A vehicle like a round submarine will be pulled up. Click on the lever above the submarine door and then click on the gnome to tell him to go inside. He’ll descend the cliff face.

The gnome will descend half way down but then get stuck on a tree. 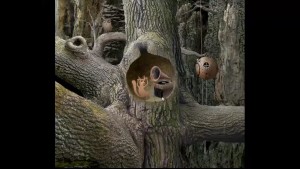 Click on the hole in the middle of the tree to reveal a squirrel trying to listen to music. She can’t hear anything because the worms are too noisy. Click on the worms one-by-one to have the bird eat them.

Once the worms have been eaten click on the little red button on the music player to play a disc.

Click on the owl to have him hop over to the right. Keep clicking on him until he knocks the submarine loose and the gnome is able to descend the rest of the way to the ground. 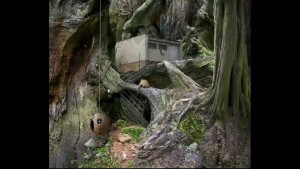 After the submarine stops swinging click on the little lever above the door to get out. Click on the metal plate on the tree to move it to the left and let the ants through. When the anteater eats an ant run up to the building. 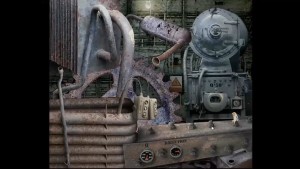 Inside you’ll see six buttons, a Q meter and the direction. On the machine you’ll see the phrase “Q = 50”. This is a clue to set the Q meter to 50.

The left three buttons have a + sign at the top, a – sign at the bottom and a ladder symbol in the middle. Press the button next to the + sign twice until the Q meter shows 50. Then press the middle button to let out the ladder.

Click on the handle at the top of the ladder to turn it and change the direction of the meteor. Enjoy the final cut-scene.

I hope you enjoyed this little puzzle game. Check out Samorost 2 and Samorost 3 here.