Starship Troopers: Terran Command is a RTS game by The Aristocrats and is available for purchase on PC. The main single player campaign takes place on a desert planet and features dozens of unique units, enemies, characters and weapons.

During the course of the campaign you’ll build and take control of an army of starship troopers, develop new technology, fight off arachnids and defend strategic locations as you try to rid the galaxy of these giant bugs.

Terran Command was developed over a number of years by a small team and is a work of love by the developers. It features dozens of unique unit types with many of them having their own special abilities. There’s a single-player storyline campaign with unique missions and characters.

Combat is based on true line of sight and true line of fire. This means that terrain elevation, obstructions and tactics will play a big part in successful combat encounters. 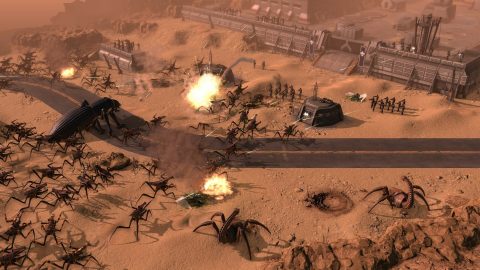 New technology will be unlocked as you progress through the campaign. You’ll develop a variety of weapons including E-Pulse rifles, heavily armed Maruader bipedal vehicles and TAC Fighter airstrikes. Rifle Troopers will form the main bulk of your army but even they can be upgraded in different ways once they reach the elite level.

The campaign takes place on a desert planet called Kwalasha. The mining industries on the planet have run into trouble, giant bugs! They’ve requested the aid of the Starship Troopers Mobile Infantry to come in and clean up the planet. It comes with a complete story featuring around 20 missions. Once you’re done with the main campaign there are a number of special missions that you can play as well. 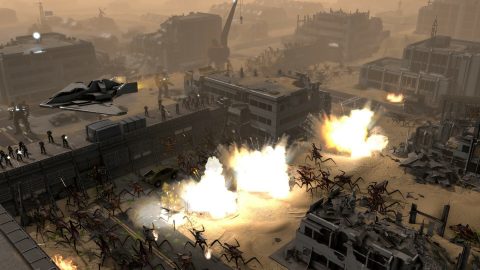 If you want to hold the line against hordes of giant bugs you’ll need a PC with Windows 7 or above and 10GB of free space. The minimum recommended graphics card is the Geforce GTX 1050/ Radeon RX 560 or equivalent with at least 8GB of RAM. Starship Troopers: Terran Command was released on the 16th of June, 2022.