The Bard’s Tale: Tales of the Unknown

The Bard’s Tale: Tales of the Unknown is the first part of The Bard’s Tale Trilogy which was remastered by inXile Entertainment in 2018. It’s a classis RPG and one of the godfathers of the genre. You create your own party of heroes and send them out to adventure through all three installments of this great trilogy.

At the Adventurer’s Guild you’ll have the option of creating a new party. A full party consists of 7 members but you might want to leave one slot free for wandering monsters who may want to join your party or for conjured characters. 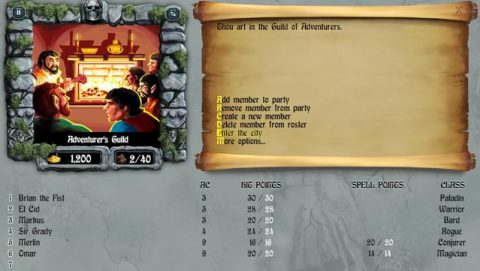 Attribute stats over 14 give bonuses depending on the attribute and class. Intelligence gives magic users bonus spell points, Strength gives fighters extra damage in combat, dexterity gives fighters bonus armor protection and Constitution gives everyone extra health points when they level up. Luck is good for Rogues and may help them survive if they set off a trap.

Fighters will do well in the beginning stages of the game but for late game you’ll want at least 2 and probably 3 magic users. You’ll only have the option of creating a Conjurer or Magician at the start of the game. Once they have a few levels you’ll be able to move them over to the Sorcerer or Wizard class. 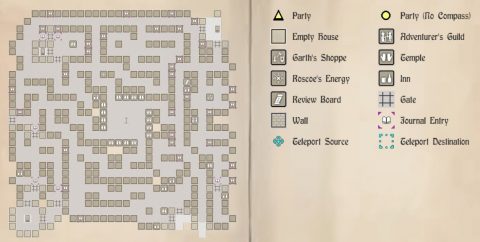 You begin in the Adventurer’s Guild on the eastern side of Skara Brae. Garthe’s Shoppe is just to the north where you can buy weapons and equipment. A Temple is to the south where you can heal your party and revive them if necessary. As you wander around you’ll find roaming enemies. Choose to fight them if you think you can win the battle. If there’s too many attempt to flee.

The quickest way to level up is to find 2 houses opposite each other. Every time you enter there’s a chance to meet a wandering enemy. Moving in and out of two houses will give you the best chance of finding enemies quickly.

Occasionally monsters will want to join your party. If you have the 7th slot open you can accept them to your team. They’ll join on the front lines, taking up the number one position.

Take note of how far away enemies are when you encounter them. Most will be within melee range, 10′. Others will be further away and can only be hit by long range spells or arrows. You may want to advance your party until you can engage in melee combat. Only the first 4 members can attack, and be hit, in melee combat.

Once you level up you’ll see a yellow arrow by the party members name. During the day make your way to the Review Board, one street further west from the Adventurer’s Guild, where you can level up your characters. 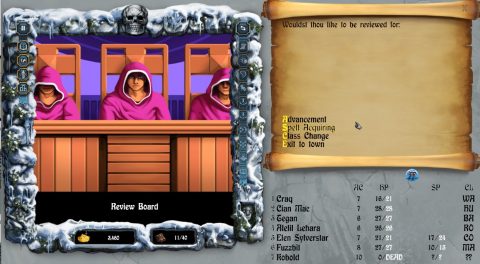 You’ll get a permanent boost to one main stat, up to a maximum of 18, and also an increase to HP and other relevant stats depending on the class.

You should have some money by now so go to Garthe’s Shoppe and buy all the best weapons and armor that your characters can use. Make sure you have some torches because we’ll be delving into the dungeons in a moment.

From the Adventurer’s Guild go south to the wall, east twice and south to the Samurai Statue. Kill it and open the gate behind. Enter the Tavern and choose to drink a Wine. You’ll be taken to the wine cellar below. 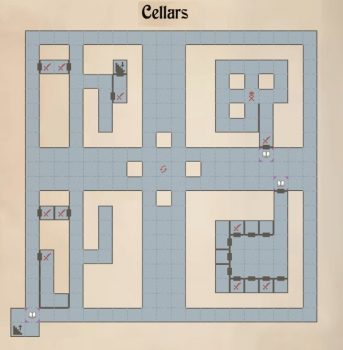 Use a spell to illuminate the area or use a Torch or Lamp. You’ll also want to cast Kiel’s Magic Compass so you know which way you’re facing. Explore the area and then head down the stairs to the north. 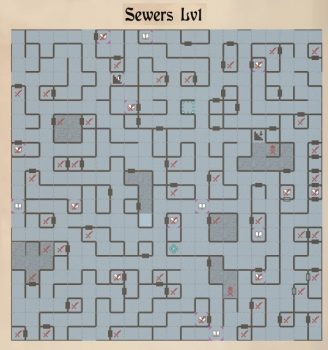 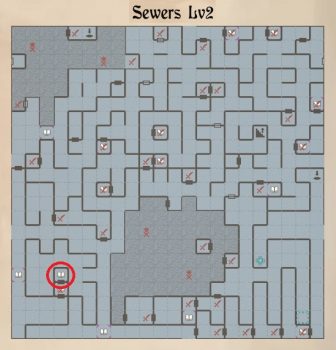 Your goal for the Sewers is to level up your characters as much as possible and make it down to Level 2 where you’ll find the name of the Mad God, “Tarjan”, scribbled on the wall. The location is circled in red in the map above.

Explore the Sewers as much as you want. Go back up to heal at a temple when you need to and visit the Review Board when your characters have enough experience to gain a level. Before going to the Catacombs you’ll want to be at least level 7+.

Back in the city head to the central temple square. Enter one of the temples on the eastern side and the priest will ask if you know the name. Say “Tarjan” and he’ll let you down to the Catacombs below. 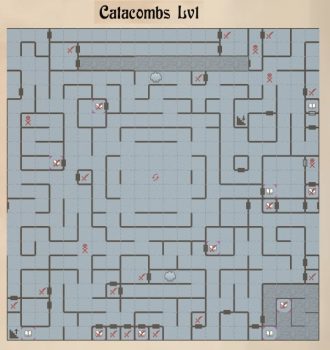 You’ll level up much more quickly in the Catacombs but the enemies are much tougher and there are more traps. The first goal is to level up your Conjurer to level 13. This will give him the Apport Arcane spell that teleports your party to just about any location within a dungeon.

If you find a Fire Horn give it to your Bard. Equip it and use it in combat for a spell that does massive damage to an entire group of enemies. Once you have levelled up make your way down to Level 2 and Level 3. You can’t teleport directly to level 3 but you can teleport to the stairs leading down to level 3. 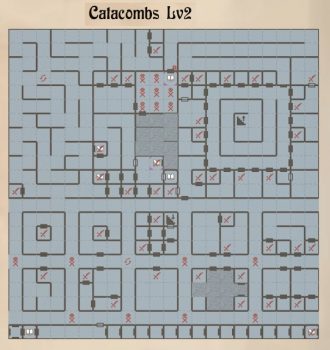 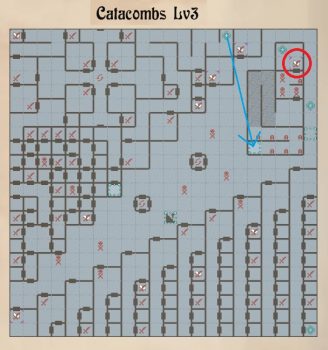 Once on level 3 make your way up to the teleporter to the north. This takes you to the interior of the building in the northeast. Make your way past the anti-magic, darkness and traps to the Spectre, circled in red on the map. Once you’ve killed it you’ll pick up the Eye. You’ll need this for the next dungeon.