The Ashes of Vizima 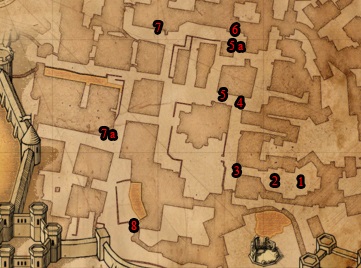 After completing Chapter 5 you’ll be back in the Temple Quarter of Vizima. The city is still burning but there’s essentially only a linear path that you’ll need to take to complete this quest. You’ll meet many familiar faces along the way and they’ll react differently depending on your relationship with them throughout the previous chapters.

1) Starting Position – Your journey begins in the Epilogue at point (#1). Eventually you’ll need to end up at the Cloister (#8) for your first confrontation with the Grand Master.

2) King Foltest and Radovid – Have a chat with the King and Radovid to find out what’s going on.

3) Dandelion – As in past chapters Dandelion will serve as your access to your storage space. This gives you one last chance to grab the items that you need.

4) Siegfried – If you’ve followed the Scoia’tael path then Siegfried will not be friendly to you and you’ll have to fight him. If you follow the Neutral path you’ll have a chance to talk to him and try to avoid the conflict. Siegfried doesn’t drop anything worthwhile when he’s killed.

5) Houses – Inside these houses you’ll find some old friends including Vaska, Vivaldi, the Resolute Girl and others. Head down to the basement to find the Ghoul, Vetala, from Six Feet Under, if you left him alive. Search the Crate and take the Key which opens the basement door. Head through to appear at (#5a). You can exit this house through the window to get back to the streets of the Temple Quarter.

6) Yaevinn – If you’ve followed the Order or Neutral path then you’ll encounter Yaevinn here. Order followers will automatically get into a fight with him but if you’re neutral then you’ll have a chance to talk to him and calm the situation down.

7) Houses – Once again head into these houses. This time you’ll talk a short walk through the Sewers. Unfortunately there’s a beast inhabiting the sewers called the Zeugl. It’s a tough battle with an octopus like creature that uses it’s tentacles to attack.

When you hack away at enough tentacles it’s head will finally appear for a short while. Take the opportunity to attack its head and then repeat the process. Eventually the Zeugl will fall and you can loot its corpse for the Zeugle Venom. When you exit from the sewers at (#7a) you’ll find a campfire so you’ll have a chance to rest.

The Grand Master will talk to you for a little while and eventually drag you through into what appears to be and icy landscape some time in the future.

Back: The Witcher Epilogue