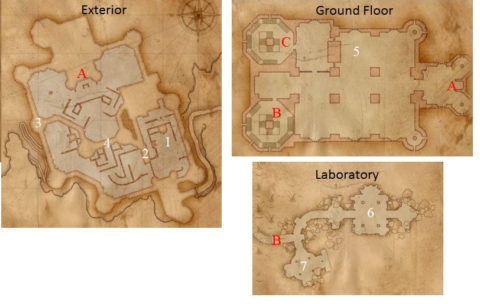 Defending Kaer Morhen is a tutorial quest which will get you familiar with the basic game mechanics. There’s no rush so take your time to figure out all of the controls. I prefer the over-the-shoulder view but use whatever works best for you.

As you begin at (#1) Bandits will have overtaken the castle. Pick up the Rusty Sword next to you and join in the battle. The Witcher uses three fighting styles, fast, strong and group. To begin with you only have the Strong style. Click once to attack. When the sword turns into a flaming sword click again for combos.

After the battle ascend to the gate (#2) with the other Witchers. Your task now is to open the gate to the upper courtyard curve your way around to the tower (#3), taking out the bandits along the way. You’ll be introduced to the fast style for smaller/quicker foes. The larger bandits can more easily be defeated with the strong style.

Race up the stairs of the tower and part of the stairway will collapse behind you. Continue towards the winch at (#4). The other Witchers will join you in the courtyard.

Enter the Keep through the large doors (A) and take out the Bandits. Leo will accompany you. Vesemir will give you a Thunderbolt and Swallow potion. Drink the Thunderbolt potion by right-clicking on it.

Inside you’ll get some tips on fighting with the Group style. This style will damage all nearby opponents but tends to do less damage to a single opponent.

When you find the way blocked you’ll need to visit the Circle of Whispering Stones (#6) to learn your first sign, the Aard sign. Use right-click to cast the signs. Remove the rubble and then you’ll be forced into your first real decision, to help Triss take the laboratory or to deal with the Frightener.

If you choose to fight the Frightener with the other Witchers you’ll need to cast the Aard sign on the bells in the courtyard to weaken the Frightener so that it can be attacked. Make sure you use the Strong style and try to put together some combos. If the bells stop ringing run away from the Frightener and ring them again.

If you go with Triss you’ll fight the Mage Savolla. He creates a shield using energy from the Bandits around him. First kill off the Bandits and then deal with Savolla. Use the Strong style for best effect.

You’ll run into the laboratory only to see the Bandits using some kind of portal to teleport away with the mutagens, but not before the Professor kills Leo with a crossbow bolt.

Now that the battle is over talk to Vesemir and meditate. You can’t get past him until you do this. Use your Bronze skill points for new abilities as you should have leveled up by now. Each level you’ll gain three new Bronze talents.

Once you’ve meditated speak with Vesemir for the A Potion for Triss quest. He tells you to speak with Lambert. He should be with Triss in the Dining Hall (#5).

Next: A Potion for Triss
Back: The Witcher Walkthrough