The clans are assembling in order to leave Lordaeron. Thrall must prepare a camp for the arrival of the horde. The tutorial continues in this campaign so you’ll be given lots of help to make it through.

Establish a Base – This includes building a burrow, war mill, barracks and training 5 grunts.

1) Scroll of Healing from a gnoll warden in the north-east section of the map.

It’s time to build a base for the orcish horde. Begin by selecting your peon and right clicking on the gold mine to have him mine for gold. You’ll be given 3 more peons so have them mine for gold also.

With the money you’ve collected start training a few extra peons. You’ll need them to collect lumber and build the buildings needed for the arrival of the horde.

Once you have enough gold build the war mill and barracks as well. When you have the gold start training up the 5 grunts. 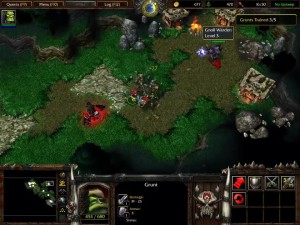 While all of this building is going on you can scout out the area with Thrall and any grunts you have already trained. There shouldn’t be anything here that he can’t handle as along as a few grunts go with him. The path to the east and north has a couple of gnolls who stand guard over a gnoll camp.

Kill the gnolls and head into the gnoll camp. The level 3 Gnoll Warden is holding a scroll of healing.

By now the main quest to establish a base should have been completed. For the next main quest you need to push the humans back and rescue Grom Hellscream who was captured with some other orcs. 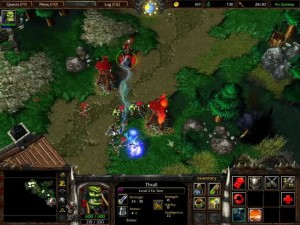 You’ll only need a small party for this rescue mission. Send them to the south east. Some humans may make there way over the bridge and start taking out the towers. Bring a peon along to do repairs.

Cross the bridge and take out the human towers on the other side. Follow the path along to the gates of the village. Take out the towers and attack the gate to force it open.

Follow the path through the small village and resuce the orcs who are guarded by humans. You’ll pick up a new unit here, the shaman, who has a ranged attack.

Continue along the path, taking out the footmen and riflemen along the way. As you kill the humans you’ll rescue more grots and another shaman. Your party should be pretty big now and rescuing Grom will be a walk in the park. 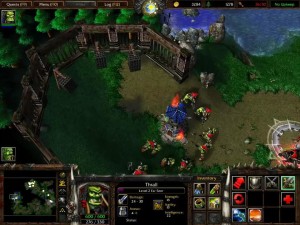 Head to the north and take out the knights guarding the gates. Bash through the gates and take down the three guard towers to rescue Grom.

If you want to keep your shamans alive make sure to pull them back as they’ll be prime targets for the guard towers.

That’s all there is to this campaign and that’s the end of this prologue. Continue on with the first campaign for the humans, The Defense of Strahnbrad.