Kill the guards and enter through the gates to the Harbor of the Tides. Guards won’t attack you here unless you attack them first or try to pick a lock. You can find Acmon wandering around here. He’s one of the Assassins from the Assassin List in the House of Kastor. Kill him for a Hermes’ Seal.

Explore the area if you like and then head over to the left. Just before you reach the boat you’ll see two doors. They both lead to separate parts of one house. Pull the Levers in both sections to open the sealed doors in the lower half. Go through to find the Raider Stash Key with a note telling you that the navigation logs have been hidden in a cave on an island to the north-east.

Head over to the left and use the boat. You’ll be given a little map of the sea. 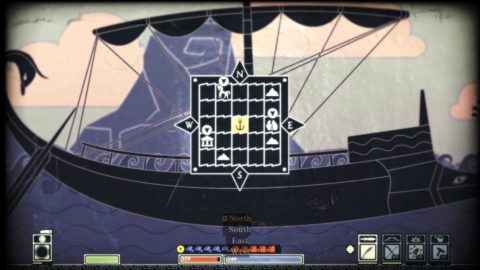 You begin in the center. The three main objectives are marked, as are three other islands. While you’re looking for the sunken treasure you may want to complete some of the main objectives along the way but remember once you complete the third objective Poseidon will attack immediately.

Sail to the island to the north-east. Get off the boat and walk onto the island. There’s a passage leading down to the left. Under the water you’ll see an entrance to a cave. Enter the cave and explore the top-right section. Use the Raider Stash Key to open a door and find the Navigational Notes. Reading the notes gives you two important locations, south of Horse Island where the key was dropped and the last known location of the Euphemia, just south of Temple Island.

Get back on the boat and travel to the square to the south of Horse Island. Dive underwater and find a friendly Seahorse to ride. There’s a large underwater cave system here where can find lots of treasure. If you want to spend some time exploring here use a Drop of Radiance potion to light up the area. In one of the caverns on the far left side you’ll find a fat fish. When you kill it it drops the Euphemia Cabin Key.

Head back to the boat and sail to the bottom left corner, south of Temple Island. Dive overboard and swim directly down. You’ll eventually spot the Euphemia. Use the Euphemia Cabin Key to unlock the door and go inside. You’ll find some gold down here as well as a chest.

Sail one square to the east and hop onto the island. Use the Mineshaft Key from Hephaestus’ Forge to unlock the Gold Mine. The interior is pitch black so you’ll need a torch or some other way to light up the area.

There’s lots of Ore scattered around the floor. Pick it up and smash it into a wall or the floor and it will shatter into gold coins. Once you’re done exploring the mine head back to the ship and get ready to complete the main objectives.

Sail to the island marked with a Horse on the map. When you get off the boat you’ll be approached by Hipparchos. He rides a horse so you’ll need one too if you want to catch up with him. Quickly run to the right and jump on a horse. Use ranged weapons or a long spear to fight him. Once he’s been defeated the first objective will be complete. Head back to the ship and sail to the next objective.

Sanctuary of the Tritons

Just to the north of where the Euphemia sunk is the Sanctuary of the Tritons. Swim into the temple and pull the first Lever. As you do the water level rises. You’ll need to swim up with it and then find the next lever to raise the water again. Continue doing this until you reach the top of the temple. Use the conch shell to calm the seas and complete the second objective.

Sail to the eastern edge of the map to the Pillar of Tremors. Walk onto the island and head all the way to the right. Break the floor and drop down into the dark water. Swim to the far left corner for a Bloodthirsty Mantis. This weapon heals you when you do damage to enemies.

Swim back out and make your way to the top of the temple. The enemies here are invisible but appear just as they’re about to attack. You can avoid most of them if you make your way quickly through the building. Once you reach the top shatter the pillar and the whole temple will collapse into ruins. Run back to the boat and get ready to face Poseidon.

Poseidon attacks once you’ve completed the three main objectives and try to set sail. He’s a giant and can only be attacked while you’re standing on the boat. 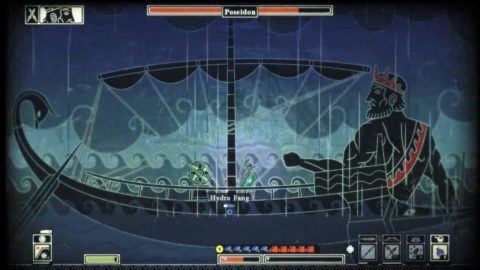 Poseidon can easily knock you out of the boat. Quickly swim underneath him and climb back onto the boat. Use ranged weapons as he approaches and then switch to melee weapons once he gets close.

If you stay right next to him he won’t be able to hit you with his trident. You can also use a Potion of Warding for invulnerability for a short while. Heal up if you take too much damage and keep swimming back to the boat each time you get knocked off.
It’s a tough battle but keep attacking Poseidon when you get to the boat and eventually he’ll fall. Pick up the Trident of Poseidon which gives you an extra roll while you’re in midair. It’s a very handy skill. Once you pick it up you’ll be taken back to the Acropolis.