When you enter the Refuge of Athena you’ll be given the objective to find the Aegis of Athena. To find it you’ll need to find the three Labyrinth Keys so you can open the sealed doors and follow Athena to the next area.

Each of the keys is can be found by going through one of the three doors. One is in the interior section, one in the middle and one in the outer sections. To make things more difficult the three sections are slowly rotating in different directions. Having the midair roll skill from defeating Poseidon makes getting around this maze a lot easier so I recommend defeating Poseidon before coming here.

Once you make it to one of the doors you’ll enter one of the sections of the Trial of Ability. The path is fairly linear but you will need to hit targets and avoid traps as you make your way towards the Labyrinth Key. There’s always a lever by the key which opens a sealed door back to the Refuge.

Find the three doors and work your way through the Trial of Ability three times until you have all of the keys. Make your way back to the center and use the keys to open the sealed doors. Follow Athena into the Siege of Heroes.

This is quite a tricky area where you’ll be attacked by many enemies along the way. Athena has left lots of Bone Dust so should always be able to spawn in four warriors to help with the battle.

You don’t need to kill everyone. Just jump over them and keep running. Your warriors will soon catch up with you. Head across to the right and then up the inside of a building. Take one of the passages to the left and pull the Lever. This opens a passage above so you can continue heading up. The two statues come to life when you pull the lever 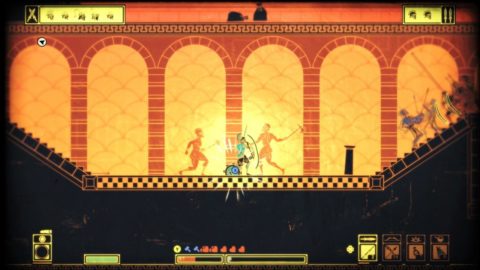 Head up to the area above and pull another Lever to open the sealed door to the left. You can avoid most of the enemies here and just let your warriors distract them. When you run to the left the battle will end and Athena will talk to you. She agrees to help you and gives you the Aegis of Athena that regenerates Shields after battles.

When you return to The Acropolis finish up any business that you have here and then go back through the doors to The Olympian Gates. Run to the left and go through the fire back to the Village of Dion.

It looks like there’s not much left of this village. All you need to do here is run to the left and a little down until you find Hera. She gives you the Plume of Hera which can be used to unlock any locked doors. You can also light the censors that teleport you up to the Fortress of Zeus.

Hera will teleport you back to The Olympian Gates. Follow the objective marker to the first censer. Use the censer and then go through the doors to the Fortress of Zeus.