Enter the Fortress of Zeus, walk to the left and use the censer. You’ll need to use a number of these as you gradually work your way up to the top. Some of the censers are hidden behind sealed doors so you’ll need to find up to 3 Fortress Keys to get to them.

The keys are always shown on the map so when you teleport up to a new area open the map to see how many keys you need and where they’re located. From now on you’ll be able to find Mirror Shields dotted around the area. They deflect ranged weapons away from you and can be used to easily kill sentries or other ranged enemies.

You don’t need to kill every enemy along the way. You can run past them, grab the keys and head to the next censer. You’ll need to do this four or five times until you reach the very top. Save your game before heading into the Sanctum of Thunder.

The Sanctum of Thunder is where Zeus resides. Hera has been chained up because of her betrayal and she urges you to kill Zeus quickly. 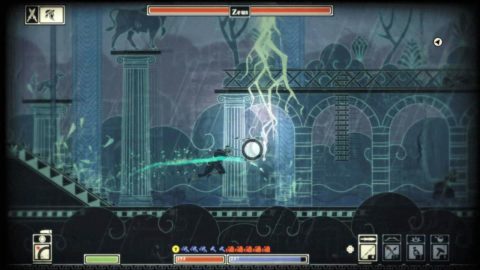 Zeus will strike with lightning and can’t be hurt until he throw a lightning spark back at him. To do this find the enemy guard flying around and kill him. The objective marker will point to where he is. When he dies he drops a Lightning Spark. Pick it up and throw it at Zeus. He’ll be stunned for a few seconds and vulnerable for another 5 seconds. Hit him with all you’ve got and then search for the next guard.

When Zeus is down to about half health the guards will drop Mirror Shields instead of Lightning Sparks. You’ll need to deflect Zeus’ bolt back towards him to stun him for a few seconds.

When Zeus has been defeated pick up the Thunderbolt of Zeus and return back through the Olympian Gates. Drop all the way down to the bottom and run back to the fire. You’ll return to the Village of Dion.

The town is in ruins now and all the people are gone. Run to the left until you find Zeus. This time you’ll turn into a god and fight him one-on-one. Use your shield to block his attacks and counter with your sword swings. He’s using a spear so try to get close and he won’t be able to hit you.

Once he’s been defeated for the second time continue walking to the left. When you get to the end of the village click on the mound of dirt and you’ll craft it into a man. It’s the beginning of a new cycle.

Back: Refuge of Athena