Hugo 2 Whodunit? is the second instalment of Hugo’s House of Horrors and follows the adventures of Hugo and Penelope. This time Penelope witnesses a murder in the house and she must find out who the perpetrator is before anyone else is killed.

In Hugo 2 you’ll play the part of Penelope as Hugo goes missing early in the game. Hugo 2 is much longer then the first game although it’s still pretty short by today’s standards. The controls are basically the same although you’ll have a larger world to explore. The full walkthrough for Hugo 2 can be found below.

Murder in the House

Follow Penelope upstairs and then OPEN DOOR on the far right and walk through. Penelope will take a nap which gives you a chance to read a book. Walk up to the bookshelf and TAKE BOOK. This will trigger a secret doorway and Hugo will get lost on the other side.

When Penelope wakes up you’ll take control of her. Walk over to the door on the left and LOOK KEYHOLE. You’ll witness the murder of your uncle! Go to the bookshelf and TAKE BOOK to enter the secret doorway.

Walk west and TAKE BALLOON. The balloon will pop and you’ll read a secret message inside. Go back east to the study and TALK TO PARROT. Stand next to the desk and OPEN DRAWER. TAKE MATCHES and then walk to the dumbwaiter. GET IN DUMBWAITER and you’ll take it down to the kitchen.

OPEN CUPBOARD and TAKE GARLIC. Walk north out of the house, then south and then enter the shed. The gardener is getting a bit frisky with Penelope so EAT GARLIC and he’ll run away. There are a series of buttons on the table. Before pressing a button you need to visit the location where they activate something otherwise they may not work.

Leave the shed and walk to the east to have a look at the gate. Walk back to the west and enter the shed. Now all the buttons should work except for the green button. Here’s what they do:

Red: Turns on the light in the shed

Yellow: Turns on the lights outside the hedge maze

Green: Turns on the bug zapper

Blue: Opens the gate to the hedge maze

The only buttons you need to press are green and blue but the green won’t work yet until you’ve visited the bees. You can turn the lights on as well if you want to. Type PRESS BLUE to open the gate to the hedge maze.

Leave the shed, walk east and enter the hedge maze. There are a number of items you need to find in the maze before returning. I’ll give you the directions  you need to take from each intersection for finding each item. If you’re not at an intersection just continue along the path whatever direction it takes you.

Walk down the path to the first intersection then take each intersection as follows: West, East and North. TAKE GUN and continue north along the path.

For the following intersections go: North, East, East, East, North and East. TAKE BELL and follow the path the way you came north.

At the next intersections go: South, South and West. TAKE BOTTLE when you come across it and make your way back to the east.

Walk west and west again to the front of the house. Now walk east to a field of Venus Fly Traps. Dodge around the plants to the magnifying glass. Only walk in straight lines. It will take a few tries so save your game before you begin. Here’s the path you need to take. 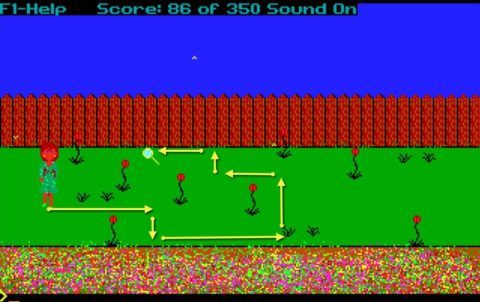 When you are close enough TAKE GLASS and then make your way off the screen to the east. Walk east and then east. Walk over the bridge being careful not to bump the sides of the bridge or the matches will fall in the water. If you drop the matches restore your game and try again.

Walk west, west and then enter the shed. PRESS GREEN to turn on the bug zapper which will distract the bees. Leave the shed and walk east, east and walk over the bridge. TAKE MATCHES, walk close to one of the plants and TAKE CATNIP.

Walk east and then east. You’ll be confronted by an old man who wants to give you a test. Penelope deals with it by bashing him over the head. Walk east and let the snake bite you. Quickly DRINK BOTTLE and in a few seconds you’ll be cured.

Take the top path to the east. Walk close to the sticks and TAKE STICK. THROW STICK and the dog will run off to chase it. Walk to the dog kennel and LOOK KENNEL. There’s some dynamite inside! TAKE DYNAMITE and then walk back to the west.

Take the lower path to the east this time. Walk down to the street and walk west along the street. Go up to the writing on the wall and LOOK GRAFFITI. You’ll see a number that you can call. Walk east and enter the telephone booth. Penelope will call the police. DIAL and type in the number 1-800-333-HUGO.

Penelope will be teleported off to another land. Quickly SHOOT ROBOT to kill it and walk over to Doctor Who. TALK MAN and he’ll give you a sonic screwdriver in gratitude for defeating the Dalek. Get back in the telephone booth to return to your world.

After the boom CLIMB DOWN ROPE and walk through to the east. There are three openings here. Walk through the opening to the left and TAKE LAMP. Leave the way you came and go through the central opening. Walk to the bottom of the screen and all the way to the right. You’ll walk over an invisible walkway. TAKE BANANA and walk back the way you came. Go through the right opening and RUB LAMP. A genie will pop out. GIVE BANANA TO GENIE. He’ll be so thankful that he’ll open the trapdoor for you. Walk up the ladder to the room above.

Go to the mouse hole and LOOK IN HOLE. This didn’t work for me but the mouse is supposed to bite you and you’ll get one point. Look at the safe and USE SCREWDRIVER ON SAFE to open it. You’ll take out your Great Uncle’s will. READ WILL to find out what it says.

RING BELL. The maid will come in to find out what’s going on. If only the cat could ring the bell you might have a chance to investigate what’s in the cupboard. RUB CATNIP ON BELL. The cat will get very interested in the bell. GIVE BELL TO CAT and the cat will start playing with it.

Quickly go back west, wait for the maid to leave and OPEN CUPBOARD to find an old album. LOOK ALBUM to see photos of Hugo as a child. Go back east and TAKE BELL. Walk back west and west again through the door to the kitchen. You’ll see a cook with a bloody knife in her hand.

Walk east and then south to the hall. Follow the hall to the west into another area with four doorways and a mirror. OPEN DOOR to the right of the mirror and go in.

Cousin Harry is here playing an organ. TALK TO MAN to tell Harry about the murder. He only laughs. Leave the room and OPEN DOOR to the left of the mirror to meet Great Aunt Hester.

When she asks you for a drink type YES. While she’s pouring out the drinks walk over to the table and READ LETTER. After you have your drink leave the room.

Walk back south and you’ll spot a policeman entering the upper door to the east. Follow the policeman through to the loungeroom. All of the suspects are gathered here. When the officer speaks and asks you whodunit? Tell him NOBODY.

You’re back with Hugo who’s managed to lock himself in the laundry. The key is stuck in the lock. TAKE NEWSPAPER and then TAKE PENCIL. PUSH PAPER UNDER DOOR and then PUSH PENCIL THROUGH KEYHOLE. The key will drop down on the other side of the door and Hugo will escape.

Great Uncle Harry will tell you that he’s preparing for a play and the murder was just an act. That ends Hugo 2: Whodunit? Thanks for playing!

If you haven’t tried the other Hugo games make sure you check out Hugo’s House of Horrors and Hugo 3.